How the Indian cow went from holy to capitalist

Capitalism has existed at all ranks of the society and all economic systems wherein ownership in the hands of a few parties with profit-making motives is placed on the highest pedestal.

In India, the cow is the silent capitalist determining economics and trade patterns, social development as well as contours of cultural assimilation.

Historically, a nation characterised as an agrarian economy was heavily dependent on cattle for agricultural labour, production of milk and transportation as well. Undoubtedly, a god-fearing society, realising the economic significance of the cow will revere the animal as a favourite of the gods in Mahabharata, or claim it to be the embodiment of over 30,000 gods to ensure that its protected and exploited for economic prosperity only.

Furthermore, killing one cow by accident meant penance by feeding a hundred Brahmans or gifting a hundred cows to the owner. With the coming of colonialism and the communal question, the pigs and the cows became symbols of rebellion amongst many others, including the lotus and the chapatti, sparking the revolution of 1857. 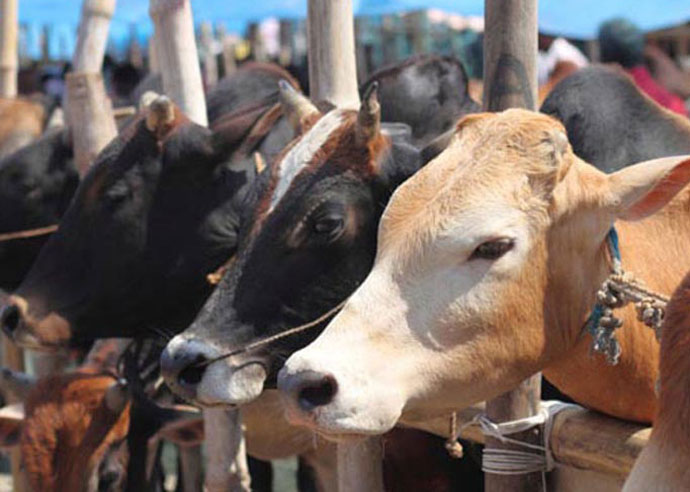 The cow is the silent capitalist determining economics and trade patterns, social development as well as contours of cultural assimilation.

Speaking of communal identity, the pigs and the cows separated and gained religious affiliations. In this sense, the cow determined social and cultural reproduction of the Indian society.

Fast-forward to the 21st century, where automation and scientific evolution has contributed significantly to agricultural production, transport is no more dependent on animal carts and colonialism has ended.

What prevails is the fact that we are still god-fearing and therefore do not allow cow-slaughter, but we are also a selfish society unwilling to ensure adequate livelihood conditions and protection to thousands of street wandering cows.

However, the “holy animal” has continued to serve societal interests by becoming subjects of media frenzy, allowing intellectuals to spark national debates, entertainers to ridicule cow-politics and most importantly allowing politicians and national leadership to propose a “constructive” criticism against the ill-practices of cow slaughter. But for those who could not cope up with this development and continue to live off cows for the purpose of trade and means of livelihood, tumultuous times lay ahead.

We like to amuse ourselves by creating hue and cry over possession of cow, but forget we have more pressing issues confronting us — inequality, caste and gender-based discrimination and social injustice that hinders our socio-economic progress.

We rest our faith not in human mankind as a whole, but in the hands of the few, taking the pride of being recognised as cow vigilantes — the protectors of cows. We cannot protect a living cow in our selfish capacities, but we are ought to protect it from dying and ensure it continues to live the miserable life. The penance for killing a cow brought interest to the owner of the animal and the burden of it was no less then capital punishment.

Today, the cow has redefined penance wherein instead of feeding a 100 Brahmans to wash away the “sins”, we take liberty in killing men. Karma has dominated the Indian belief system as the determinant for rebirth and attaining moksha or going to the heaven.

In the Indian case, the silent capitalist cow enjoys the greater possibility of going to the heaven for living a miserable life on earth, yet serving humanity in all possible ways than the alleged fighters for cow rights willing to take lives in the holy name, but not willing to give life to the holy animal.

Also read: What if cow instead of tiger is declared the national animal of India?

#Cow protection, #Hindutva, #Gau Rakshak, #Economy
The views and opinions expressed in this article are those of the authors and do not necessarily reflect the official policy or position of DailyO.in or the India Today Group. The writers are solely responsible for any claims arising out of the contents of this article.

The author is a graduate in International Relations from Leiden University, The Netherlands. A reader by day and writer by night, her work draws influence from the evolving socio-political environment.