Why Chhatth Pooja is special to my Bihari heart

In a caste-ridden and glaringly unequal state, the festival is a great equaliser.

After Lord Ram and Queen Sita returned to Ayodhya, they observed a fast and conducted a yagna for Surya devta, the Sun god.

When the Pandavas were in exile, some sages came to visit them. Yudhisthir was distressed – the princes had nothing to offer to these learned brahmins. Seeing her husband suffer, Draupadi begged sage Dhaumya to help – what could she do to end the troubles she and her husbands seemed always surrounded by? The sage suggested she observe a stringent fast and pray to the Sun, and Draupadi’s problems eventually disappeared like sunlight dispels darkness.­­

On the other side of the Mahabharata divide was Karna, the blessed son of Surya, and he too once organised an elaborate pooja for his father. Karna went on to distinguish himself in the war, recognised even by Krishna as a great warrior and a greater man.

On returning to Ayodhya, Lord Ram and Maa Sita observed a fast in honour of the Sun god, this ritual subsequently evolved into #ChhathhPooja. pic.twitter.com/a58DVKHJtw

In the early Vedic times, man worshipped the elements that he didn’t understand but that governed his life. The Sun, the provider of light and warmth, naturally had a major place.

Purvanchalis have many illustrious precedents for observing Chhatth Pooja. And they respond with proportionate fervour, worshipping the Sun and his consorts, Usha and Pratyusha (light of the rising sun and of the setting sun), over a festival stretching four days, involving a 36-hour fast from the one observing the Pooja. The Sun is offered prayers at dawn and dusk, with the devotees standing in a water body, and the entire community displaying unparalleled solidarity to make the festival successful.

Warm greetings to all celebrating #ChhathhPooja . May you be blessed. pic.twitter.com/Ojc0VjvAC4

Late October to early November – the 19th to 22nd day the Kartik month of the lunar calendar – is therefore special in Bihar and eastern Uttar Pradesh.

This is the time of the year when across the region, dutiful sons and daughters are decorating river banks – earnest youngsters bent over with diyas, colours, flowers. Neighbourhoods are fragrant with the smell of flour and jaggery being fried in ghee. Suddenly, sugar cane is visible every where, poking out of most compounds.

There are smart-looking faces, fancy cars in every neighbourhood – prodigal sons and daughters from across India and the world have come back home. Songs are floating in the air, in that Sharda Sinha voice that makes pravasi Biharis homesick.

If you have grown up in Bihar – like I have – religiosity to you will mean, above everything else, Chhatth Pooja.

Though governed by very strict rules, Chhatth is also liberating. In a caste-ridden, glaringly unequal Bihar, Chhatth is the great equaliser. It was performed by the victorious king, the troubled wife, the aspirational warrior, the common man.

Even today, people from all castes can practise it – the normally un-traversable caste boundaries are considered “suspended” for these four days.

No priest is needed to perform the pooja, it is between the devotee and god.

Both men and women observe the fast, which is undertaken for the deity, not for husband, as in the case of Karva Chauth and Teej, or children, like in Jitiya, the other festivals involving fasting.

Even the deity is worshipped in both his forms – the rising sun and the setting sun, sending out the message that Ushya and Pratyusha, dawn and dusk, rising light or disappearing light, are cyclical, essentially two sides of the same coin. The offerings made to the god are of humble fruits and vegetables.

The offerings to god are humble, those that don’t make an appearance in other, richer festivals – pomelo, sweet potato, water chestnuts, banana. They are carried in soops, or cane baskets.The kheer – rice pudding – is made using not the expensive sugar, but jaggery or sugarcane juice, making sure even the poor can celebrate the festival.

The rules governing the festival are elaborate and exacting.

The first day is called the naha-kha, literally, bathe and eat. Those observing the fast don’t eat anything till they take a ceremonial bath in a river or a pond. If you have lived in Bihar, the optics of people from all castes taking dips in the same water together leave a big imprint on your mind. In villages, this is the day lower castes can feel as close to god as the twice-borns.

After this, they consume a meal with a pumpkin dish. Water brought back from the river is used to make a chulha, on which meals for those observing the fast will be prepared for the next three days.

The entire community then gets involved in cleaning, not just homes, but the whole area, especially paths that lead to the water body. A neighbour, impressed with a Swachh Bharat initiative in his area, once assured me the streets were left as clean as during Chhatth – there is just no higher praise.

The prasad consists of Bihar’s signature dish – khajur or thekua. For this festival, the rich don’t hire the poor for work, the household is supposed to organise everything on its own, there is pride and punya to be obtained out of it.

No one must eat any of the prasad before it is offered to god, I know a house where the entire batch of thekuas was discarded and a fresh one prepared because a 3-year-old child had touched one. 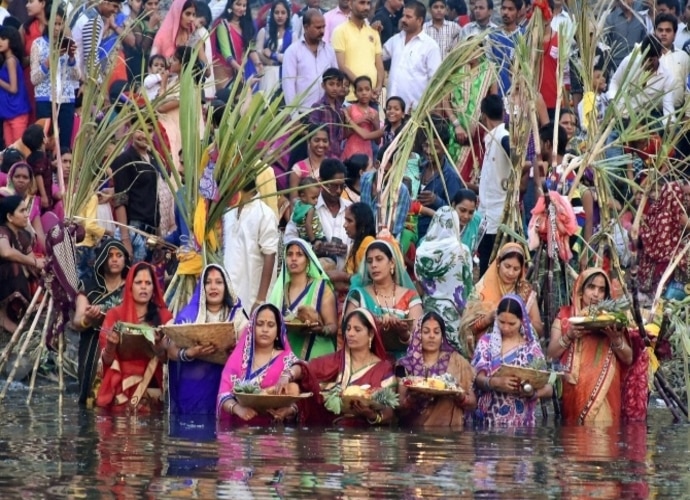 Sugarcane is used to decorate the ghat, or river bank. Photo: PTI

Critical remarks about the rules governing the festival, even those made in jest, are immediately shushed, and interrupting Chhatth preparations is considered direct invitation to skin diseases.

On the second day, those observing the fast will conduct a fast in the evening, after which they eat roti and kheer. If you interrupt them or call out to them while they are eating, they will have to leave the meal unfinished. After this begins a 36-hour fast, during which the devotees will not eat a morsel, or drink a single drop of water.

The next day, from the afternoon itself, the youngsters in the family will venture out on an area domination exercise. Carrying banana branches and sugar canes, they will go to the bank of the river or the pond, and mark out an area with the branches. This area will then be decorated with rangolis and diyas. As dusk approaches, those observing the fast will make their way to the river in a procession.

The river bank lit with thousands of diyas, the rays of the slanting sun on the water, religious songs playing softly in the background, the smell of incense, and hundreds of people brought together by devotion, remain my abiding image of “pooja”.

Those observing the fast then offer arghya – raising their soops full of thekua and fruits to the rays of the dying sun. Family members pour water into the soops, as the one offering the arghya prays for each one of them.

Chhatthi Mayyiya – Mother Chhatth, Sun’s wife, is a great giver of boons, and touching the feet of those observing the fast is supposed to get you a lot of spiritual credit, and possibly the fulfillment of some materialistic wishes. Those who can't go to a water body make small pools on their terraces, but decorate them like an actual ghat.

The next morning, the same process is repeated for the rising sun, and the festival concludes. Those observing the fast can now eat and drink, and the entire community is grateful that the difficult festival has passed successfully.

The emphasis on Chhathh is on individual observance of rules, which are the same for rich and poor, upper caste and lower caste. You cannot make your festival greater than the neighbour’s by hiring a better priest or by making richer offerings to god.

Over the years, there have been very few changes to how the festival is observed, though many people now build small pools in their own gardens or terraces as rivers have become more crowded and polluted.

Once unique to Poorvanchal, Chhatth is becoming more visible across the globe now, without help from Bollywood. That is a pointer to its popularity among the poorer sections – within India, a lot of migrant Biharis are blue-collar workers, who are now celebrating the festival, which for them is a part of their identity.

For me, Chhatth is an annual reminder that everyone is equal in the eyes of god, and a setting sun is worthy of worship too, for it will rise again the next morning.

Also read: The real story of how Taj Mahal was built

#Sun worship, #Bihar, #Chhath Puja
The views and opinions expressed in this article are those of the authors and do not necessarily reflect the official policy or position of DailyO.in or the India Today Group. The writers are solely responsible for any claims arising out of the contents of this article.