Dantewada: The perils of reporting, and working, in conflict areas

The fight against Maoist insurgents has killed several armed personnel. Yesterday, it killed a media professional too. We will only bear more losses with our own killing our own

His face is in front of my eyes. It’s barely been four days that I met him. In all honesty, I did not know his name until Tuesday morning.

Last week, I had gone to Dantewada to report on elections in Maoist areas.

Eighteen constituencies will go to polls in these affected locations in Chhattisgarh on November 12 in a high-stakes election for both – the Maoists and the security forces.

For the state, peaceful elections would reinforce the claim of left-wing extremism weakening in Dandakaranya. For Maoists, a violent election would imply their writ still runs large.

On Thursday, I decided to visit some villages that had witnessed zero polling in 2013, where the boycott called by Maoists had been very effective. I wanted to get a sense of why residents of these villages shun the democratic process, the sort of control Maoists have over their lives, the threats involved in boycotting the boycott. Most importantly, I wanted to know why residents choose not to participate in an exercise that perhaps has the best chances of getting whatever they wish to get from the state. Red terror in Chhattisgarh has resulted in the loss of several lives. (Photo: PTI)

Along with Dantewada's SP, Dr Abhishek Pallava, a doctor from AIIMS, Delhi – who often treats Maoists injured in police operations – I set out for Aranpur that lies on the Dantewada-Jagargunda Road. Unnerved by the turns taken at 100kmph, I asked Dr Pallava if his driver had been a rally driver before joining the police. I was then told that this is standard operating procedure in strife-torn areas where explosions are the chosen method for execution.

Apparently, the chances of an IED missing its target are higher if the vehicle is moving fast.

I saw some wisdom in this but asked him, what if there was an ambush, and whether we were well prepared for what would follow. I was told that high-value targets are usually targeted through IEDs. If it finds its target, there won’t be much to do. If it doesn’t, and there is an ambush, then the idea is to break it.

I began noticing all the turns, the culverts, and the natural depressions leading to the road that act as feeds to place explosives under the road — for once, I realised being blown up was a very real possibility.

We reached the Aranpur police station and were greeted by the Inspector in charge and his second-in-command who were in full kit – tactical vests, body armour, radios in place and assault rifles slung across their shoulders. At a place like Aranpur, which is on the frontlines of the battle between Maoists and security forces, your weapon is an adjunct to your body. It can’t be let out of sight either during the day or night.

I planned to go to Potali – a village about one km off the road. The second-in-command and his team led on bikes, and eventually, I had to stop them at the point where we turned off the main road. I asked them to stay put on the road or return to the police station because I knew the village residents would never speak to us if we went in with the police.

Self-preservation comes naturally when you are working in a conflict zone. The standard operating procedure for journalists in such areas is to not be seen with the police — it makes you a target when you aren’t one. Moreover, the education department staff accompanying us were worried too. Maoists do not offer resistance to teachers and public distribution system (PDS) staff in villages, and going in with the police would put the education department staff at risk in the future, especially when their visit, like ours, was not a one-off.

We spent about an hour at Potali and found the police team coming towards us when we were on our way back. The second-in-command said that he came to look for us when we didn’t come out. 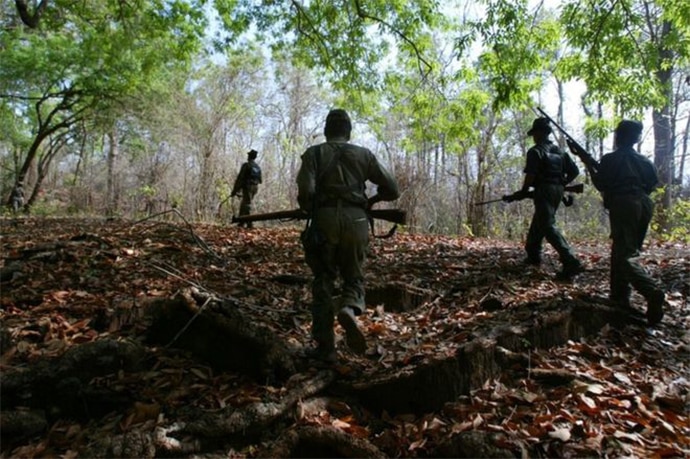 It's a harsh terrain and a mighty tough battle. (Photo: AP)

Once out on the road, I asked him if we would photograph his team while they were patrolling on the road. He agreed, but on the condition that we didn’t show any faces. He had done two years at Aranpur and he knew the small things that made a difference between life and death in these parts.

The second-in-command then told us that the SP had advised us to return to Dantewada and that he would escort us out of his police station limit. I however wanted to go to Jagargunda – a demand dismissed by him very sternly. I asked him to check on the radio if the SP had indeed left. Amidst the wireless static, I heard him say, “Rudra calling, kya ‘One’ nikal gaye?” I thought Rudra was his call sign, in much the same manner as "One" was the call sign for the SP.

We began moving back towards Dantewada. On the way, we found the SP. He told us that a woman who had been injured by an animal trap made up of spikes placed in the forest by Maoists had to be taken to Dantewada for treatment.

We then went to another village called Jabeli where we were told by the local school teachers that a group of about 30-40 Maoists had just left the village for the hills when they saw a build-up of forces along the road. We returned to the main road, only to learn that there had been an exchange of fire between Maoists and forces when a team went in to extract the lady.

The second-in-command was part of that team. Two policemen and a cameraperson of national broadcaster Doordarshan were killed in a Maoist attack on Tuesday. (Photo: PTI)

On Tuesday morning, I learnt that a journalist had been killed in the same area where I was four days ago.

And I selfishly heaved a sigh of relief — it wasn’t me. I realised it could have been me. There had been another journalist who had visited the area some time back and apparently, the Maoists did not like the media attention.

Then my thoughts turned to the two deceased policemen, one of whom I was told, was a sub inspector. Moments later, I received the names of the slain policemen.

It didn’t take me long to realise that the name mentioned in the wireless conversation wasn’t the sub inspector’s call sign. It was his name.

The scene flashed in front of my eyes, Rudra, with his almost six-foot frame, looking a little too big for the bike he rode, the unkempt look, which is a strict no for uniformed men but condoned for special forces, the tactical vest that he said carried 3 mags with 90 rounds and his cherished possession – a Bulgarian AK.

At the police station, he had allowed me to have a look at his AK, and I told him that he was lucky being the only one at the police station to have a Bulgarian AK and not the IOF manufactured one like the others. A uniformed man usually invokes a desire to impress and I plead guilty for having fallen for it.

Where does this go? This is a war in which our own are killing our own. (Photo: PTI)

I told him that he shouldn’t use the IOF mags in his AK and use the original orange ones that have a smoother feed. I asked him about jamming and how dust messes with the mechanism. He said it hadn’t let him down ever and told me he gave me his rifle only because he sensed I knew something about them.

I don’t know if the AK lived up to the expectations of its bearer.

We talked, laughed and shared a cup of tea that day.

The Doordarshan team had been the next group of journalists that went into the village after me. They were accompanied by the police, a strict no-no in conflict areas, but for many who see the fight as one between "us" and "them", the police’s presence is very reassuring. I then realised it could have been me, had we gone in with the police.

The cameraman killed, Achudanandan Sahu, had posted a picture on Facebook with some village kids a few hours before the incident. The constable killed, Mangu, was a local lad from the District Reserve Guard (DRG). Rudra, 35, was a resident of village Sonsari in Janjhgir Champa district.

He came from a family of teachers.

Both his parents were teachers, his wife is a teacher and Rudra too was a teacher, before he was selected as a sub inspector – a life he chose because of the uncertainties it offered. He had put in almost three years in the LWE area and was expecting to be transferred out.

Rudra leaves behind his wife and a six-year-old daughter — collateral damage in a war in which our own are killing our own.

Also read: Why return of Left-wing extremism in Andhra Pradesh is a reason for worry

#Police, #Doordarshan, #Dantewada, #Maoists
The views and opinions expressed in this article are those of the authors and do not necessarily reflect the official policy or position of DailyO.in or the India Today Group. The writers are solely responsible for any claims arising out of the contents of this article.