Not only did the governor give a long rope to the BJP for horse trading, he also ordered a swearing-in for the CM the next morning.

Watching recently sworn-in BS Yeddyurappa thanking the people of Karnataka for their support and saying that he feels humbled makes me want to laugh and cry with equal intensity.

Is he living in denial? Does he not realise that he hasn’t actually won the mandate of the people? He’s been made chief minister because governor Vajubhai Vala decided to give him two weeks to "buy-out" Janata Dal (Secular) and Congress MLAs and when approached, the Supreme Court agreed to give him 24 hours in the chief minister’s chair. Remember the Supreme Court where honourable Chief Justice Dipak Mishra has been trying to thwart the Opposition’s attempts to impeach him on charges of — or as some would say — sucking up to the government.

I don’t want to care about niceties today. Should you actually be measuring your words and cushioning blows when the BJP is busy reducing this country and its institutions to pawn shops where integrity is being sold cheaply? 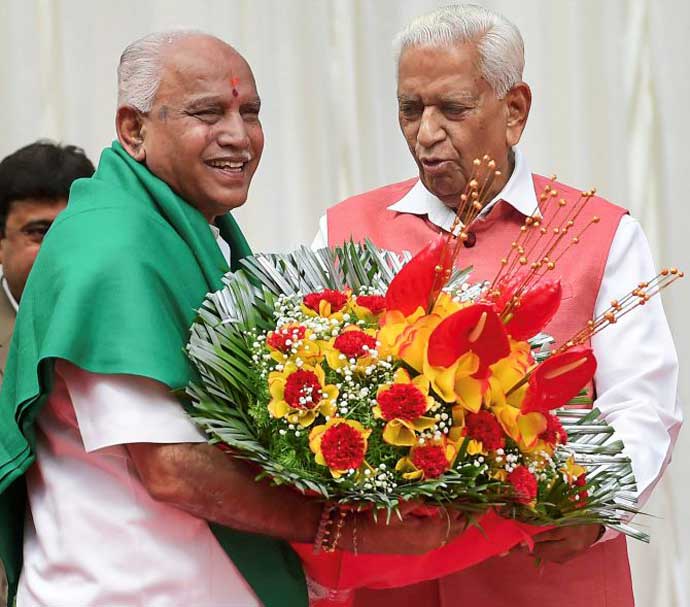 Let us for a minute step back and look at what is happening in Karnataka. The Assembly election threw up a fractured mandate. BJP landed up with 104 seats, Congress managed 78 and the JDS bagged 38. The BJP was clearly the single largest party but it fell tantalisingly short of the halfway mark. The Congress swooped in and announced a tie-up with the JD(S) just as the final tally was being announced. Sonia Gandhi, one can say, pulled an Amit Shah on the BJP!

The saffron party and its spokespersons — both official and unofficial — attacked the Congress for being sneaky and immoral but have they forgotten what happened in Goa and Manipur and Meghalaya and Bihar.

What is sad is that even when the JD(S) and Congress combine (with its 117 MLAs) staked claim to form the government and sought an appointment from the governor, I, for one, was pretty sure that their request would be turned down. Not for a second was there any doubt in my mind that the governor would not consider their plea.

Of course, a simple "Google search" revealed that Vajubhai Vala was an old RSS hand and a Modi loyalist. Could he have taken any other decision? I don’t think so. Not because it would have been unconstitutional but simply because he’s a Modi man and Modi men function the way they function — with a brazenness that’s typical to them. When the governor called Yeddyurappa and gave him two weeks to prove his majority, what was he really doing? Was he not simply giving the BJP a window to poach, buy or blackmail? Was the governor then actually giving permission to the BJP to indulge in activities that are unconstitutional? Like a licence to poach?

A colleague, who sits next to me in office, put it very well: "Math is math. There are 222 seats in all. 117 of them have given their signatures saying that we are one group and we want to form the government but the governor invites the 104 others to prove their majority — which isn’t there and has been disapproved right in the beginning. So the governor is basically saying go prey. As the former finance minister of Gujarat Vajubhai Vala knows the basics of trade."

Not only did Vala give a very very long rope to the BJP for horse trading, he also ordered a swearing-in for the chief minister the next morning. Why the hurry? What option did the Congress-JD(S) then have but to move the Supreme Court, which they did for a late night hearing.

The office of the Chief Justice of India was approached and CJI Dipak Mishra promptly formed a constitutional bench comprising of Justices AK Sikri, SA Bobde and Ashok Bhushan to hear the matter. It begs asking: Why was no senior-most judge of the Supreme Court, after the CJI, put on the bench?

Was this yet another example of the CJI trying to keep the four top judges away from "politically sensitive cases that have far-reaching consequences" and assigning them to a "preferred" bench? Why was no senior-most judge of the Supreme Court, after CJI Dipak Misra, put on the bench? Photo: PTI

Speculate and cushion as much as you want but when the highest judicial officer of the country refuses to change his ways and continues to "manage" the top court in a non-transparent and questionable manner, we cannot sit pretty and say "Oh! contempt contempt!"

We have to question because "fixing" is much worse than "contempt" and our silence today will destroy institutions that define our country.

If the decision to impose President’s rule can be stayed by the courts, why is the bench claiming that it cannot rule against the governor?

Is the Supreme Court no longer interested in even maintaining a facade of unbiased objectivity?

Meanwhile, the Congress — after a long time — is showing that it has some fight left in it. Not that the grand old party can boast of a clean slate but in a situation like ours, we need an Opposition which can at least challenge the government and question its decisions.

Protests being organised in Goa, Meghalaya, Manipur, Bihar and Rajasthan may not be able to yield any tangible results for now, but they show that the Opposition parties have decided to come together and raise their voice against the unabashed lust for power that is threatening to destroy our country.

#BJP, #Karnataka Assembly polls, #President's rule, #BS Yeddyurappa
The views and opinions expressed in this article are those of the authors and do not necessarily reflect the official policy or position of DailyO.in or the India Today Group. The writers are solely responsible for any claims arising out of the contents of this article.