Our own Bangla-Desh: We Indians want to build our houses from scratch. And one house just isn't enough

Construction is testimony to doing well in life. That's why you won't find a single spot in the nation where there isn't construction work, materials being transported, the sounds of a drill.

My landlord in Delhi puffs on a cigarette and defends the mess scattered around his cavernous storeroom. Pointing to the empty bottles of mineral water and the crumpled balls of newspaper, he explains that this waste material can be used to erect a perfectly functional wall that will then prop up a roof.

He fancies himself a green architect.

He's made friends with a daily wager who spends a few hours every day indulging in the drudgery of pushing the rags into the bottles (with the back end of an exhausted ballpoint pen). This goes on for a few days — until both parties lose interest in this great recycling project.

Unruffled by the activity having ground to a halt, my landlord lights another cigarette and makes a larger point — 'In India, there are two things that can lead a family to poverty. The first is a daughter's wedding; the other is building a house. By using bottles and newspapers, one can eliminate the latter. That's the message I'm trying to spread.'

While this project, in particular, didn't get off the ground, my eccentric landlord has a point, of which I'll accept a tangential truth — We Indians love nothing more than building a house from scratch.

There is absolutely no place you can go to in India where a house is not being constructed.

The grating sounds of the electric drill, of tiles being cut, floors being laid and cement being churned, has acquired the ubiquity of the sounds of nature. No sooner has one house finished with its noisy business than another one starts, taking the baton further onwards in the never-ending journey of construction.

Even as I write this, I can hear the sound of a drill.

In Mumbai, greed plays a factor — pulling down a building to add extra floors and flats.

But even leaving that aside, the Indian penchant for construction knows no end.

One house is not enough, especially in small towns.

I know people who have built perfectly liveable houses — only to start building another in a different locality because it had got a little noisy in the previous neighbourhood.

I know someone else who got a bathroom redone for no good reason, except what we Indians call 'timepass'. 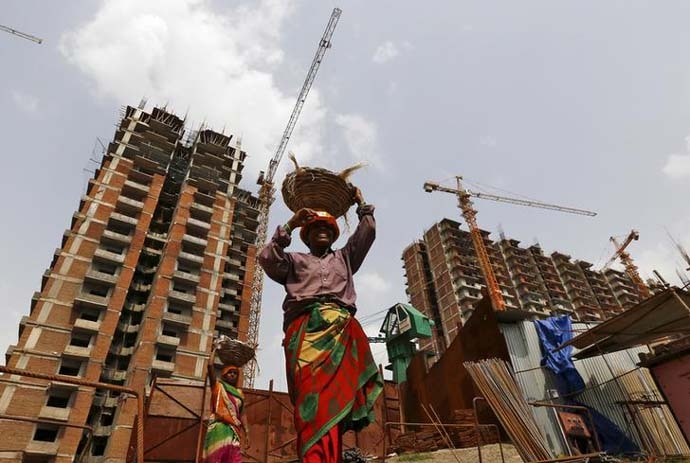 The near pavilions: There is absolutely no place you can go to in India where a house is not being constructed. (Photo: Reuters)

There's a third person I know who moved into a new house with her in-laws, and then, as soon as they'd done the grah pravesh pooja, the cussed in-laws began grumbling about sharing the house; now, she and her husband are looking for a plot for themselves.

Many times, the joint family system forces you to build afresh rather than provide a single roof for family members, as one would likely presume.

If not a different location, we pull down the existent house and rebuild it. It's become a cultural paradigm to indulge in some conspicuous construction activity whenever you have cash to spare.

It serves two functions: It sends out a clear message to one's neighbours that one is 'doing well' — a peculiarly Indian obsession.

There's also the love of 'doing', by reducing walls to rubble, one feels a rush of blood to the head, what Nietzsche would have explained as exerting one's Will to Power on the world around you, done cheaply via hired hands.

Some houses are built only because the plot was there, lying around. There seem to be any number of middle-class Indians with plots to spare. So you build the first house, where you live, and then you build another one because another plot is vacant and labour is cheap; might as well. If one goes higher up the class hierarchy, then your class dynamic dictates that you build a summer house in the hills (after getting a certificate that falsely certifies you as a local farmer).

Either way, one house is just not enough.

For us, a house performs two functions: it is obviously a dwelling, a hiding place from the chaos of India; in addition, it's also a memorial that you build to yourself. There's an attempt here to cheat mortality, a feeling of 'Even if I'm not around, what I constructed will continue attending the class of life'; one's attendance is marked by one's proxy: the house one built.

Houses in India take a long time to build. Things move at a snail's pace. Which is why the sounds of building never subside. The sights of building are all around us, in the traffic: notice the man riding pillion, precariously balanced on a scooter, carrying a plastic pipe of some sort. Haven't you spotted the trolley cycle-rickshaw guy, pulling a bunch of iron rods, making a pilgrim's progress, the rods sticking out dangerously from the rickshaw? If one walks an Indian street at any hour, one sees someone or the other transporting some kind of construction material from point A to point B.

Another fascinating aspect of our obsession with building is the linguistic split in television commercials.

If you flip channels during the nine o' clock news, you'll find that the Hindi news channels are filled primarily with TVCs for sariya (iron rods), cement, tiles and bricks. These ads have remained a constant — a constant reminder of our national commitment to the building project. In the recent national Budget, too, there is a big push for affordable housing. The stuff of life: If one walks an Indian street at any hour, one sees someone transporting some construction material around. (Photo: Reuters)

Building houses is such an obsession that, in the early days, when flats first appeared in small towns like Allahabad, they were towers of novelty. People wandered into under-construction projects out of curiosity and marvelled at the smallness of living spaces. It took some years for the apartment model to take root.

Ideally, the Indian likes to build her own house, rather than buy a readymade space, which reeks of assembly-line sameness. The pooja room and Vaastu have to be got just right. This relentless quest to build a uniquely individual house also means that our streets don't have the homogeneity of the West. Since every gate, every house is made differently and painted in whimsical colours there is plenty of variety — but a lack of urban sameness.

You can build many houses but then the question arises — what do you put in it? One person I know rebuilt his house and packed it flush with modern amenities. He came over to mine and said: 'You know I got everything, but once I came to yours, I realised how nice books look against a wall.' He then asked, "Can I take a shelf of books, please? You have so many you wouldn't even notice.'

He was dead serious.

Given the amount of emotional connect we have with our houses, one can imagine the heartbreak of lakhs of duped Noida home buyers (including this writer) who were all promised swimming pools and had to remain content with skeletons of structures (and their old bookshelves) instead.

In a country which literally worships the laying of a foundation stone, a building scam was always on the cards.

It was so easy to pull off.

In retrospect, it beats me that we didn't see it coming.

I do wonder, though, if the builder used our money to build one helluva mega palace for himself?

I'd love to see it someday.

Post your comment
#Noida, #New Delhi, #Flats, #Construction
The views and opinions expressed in this article are those of the authors and do not necessarily reflect the official policy or position of DailyO.in or the India Today Group. The writers are solely responsible for any claims arising out of the contents of this article.