Dealing with love, life and death in times of the coronavirus

There are countless many who have lost their lives during this pandemic while their families could only look on helplessly. One has so much to be grateful for.

In her award-winning book, The Inheritance of Loss, author Kiran Desai, talking about the idea of love asks, "Could fulfilment be felt as deeply as loss?" She talks about love as being a sort of illusion —  the resultant mirage of the deep ache and anticipation of love which she opines is the real meaning of love and not the actual emotion itself.

I believe the same holds true for the loss of a loved one. Or even the idea of such a loss.

My husband’s uncle on his maternal side passed away this week owing to a persistent post-surgery infection. They say death has a way of bringing strangers together. Sometimes the poignance of this truth is intangible and can only be felt deeply with a profound sense of grief binding even the estranged together.

When my husband was speaking over the phone with his cousin to offer his condolences for the loss of her father, it was the first time they had spoken over the phone in a long long time. I had half-expected the conversation to be a tad bit awkward and abrupt. Instead, it turned out to be a long, emotionally charged and heartfelt exchange, that let the tears linger long after the conversation had ended. Their paths had barely crossed, words barely exchanged in years, but here they were, sharing tears of a common loss. Laced with the ache of what could have been if they both had more time with him — the father, the uncle. There were only two people on this phone call, but I was the third in the room with tears in my eyes. It is fascinating how death and loss, even if briefly, can help you rekindle broken or lost liaisons over the years in the way open, exposed wires can resurrect lost connections when they are duly refitted inside the electricity box. They say death has a way of bringing strangers together. Representational photo: Reuters

As if we needed more action during this emotionally charged week, my dadi (paternal grandmother) was rushed to the hospital in my hometown of Chandigarh, where she lives with my parents and siblings, in the house I grew up in. Inching towards 85 years of age, the wrath of the approaching and unmitigated disaster train that speeds up when age decides to stop playing ball, was not lost on us. With multiple problems, some feeding off each other while others were new and most unnerving, the frailty and weakness of her condition the day she got admitted had scared even the doctors. With the grace of God, she managed to pull through, but not without opening our eyes to the harsh reality of just how invincible old age is. Like an ace bowler ready to deliver that last ball to the weakest batsman at the end of the batting order, old age is that ball that you see coming and you know you must do your best to hit it out of the park but instead, you end up conceding your wicket. And then the game is lost.

We knew that ball was well on its way to my grandmother. And she was now too weak to hit it over the boundary ropes.

It is instances like these when family and close friends step up and take over. It is family that drops everything and shows up. Sometimes just that much is enough to win the game, whatever the score may be.

This was also evident in the case of my husband’s uncle. While he was in hospital in critical condition in Delhi, their two children who live outside of Delhi were unable to travel to be with him in this difficult time owing to the coronavirus-induced global travel ban. It was the rest of the family in Delhi – aunts, cousins, siblings — who stepped up and took over so that his now-widowed aunt would not have to face this devastation all on her own and in the absence of her children. Never does the importance of family bondage and love become more palpable and profound than in a time when death triumphs and takes from us. 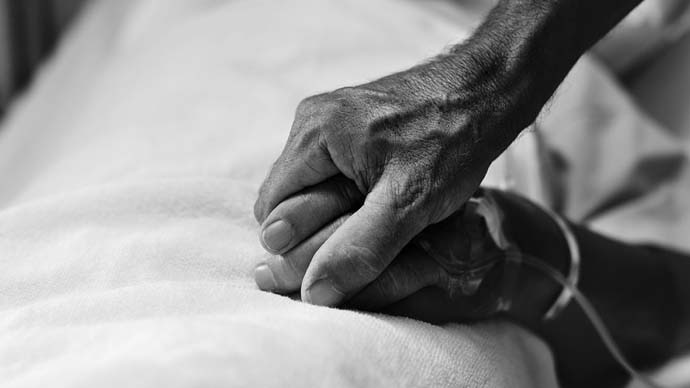 Never does the importance of family bondage and love become more palpable and profound than in a time when death triumphs and takes from us.

I was forced to take a minute and dwell on the formidable forces of the human condition that can make people across borders, across time zones — in many cases strangers to each other — come together even in a time when the world is in the throes of a global virus pandemic to celebrate and mourn the loss of another being. We are fortunate to be living in the age of the internet wherein social media and video conferencing applications have made this possible. In an age where just with the click of a button or the swipe of the thumb, one can make a person living many miles and many seas and oceans away, those who are hardly a part of our mundane every day — perhaps even our weeks and months — feel loved as they had never thought possible.

As my grandmother trudges slowly along down the long and arduous road to recovery, frail and weak from the toll taken by the illness, but never alone owing to the house full of loved ones to care for her, my thoughts shift with a lump in my throat to the countless many who have lost their lives during this pandemic while their families could only look on helplessly. One has so much to be grateful for.

It is the ultimate irony that has slowly sprouted to the fore with heightened conspicuousness during these unprecedented times when the world has been forced into self-isolation. As if an emotional trigger has been pulled while we are all in lockdown, away from families and loved ones for months on end.

That not just the “fulfilment” but even the idea of loss has broken those barriers of distance that even the dreaded virus could not get to, and brought isolated, sequestered people across the world closer together.

“I can accept the idea of my own demise, but I am unable to accept the death of anyone else.

I find it impossible to let a friend or relative go into that country of no return.

Disbelief becomes my close companion, and anger follows in its wake.

I answer the heroic question “Death, where is thy sting?” with “it is here in my heart and mind and memories.”

Also read: What I learnt about my life, every time death took someone away from me

#Family values, #Love, #Death, #Coronavirus pandemic
The views and opinions expressed in this article are those of the authors and do not necessarily reflect the official policy or position of DailyO.in or the India Today Group. The writers are solely responsible for any claims arising out of the contents of this article.