It must quickly rise to the challenge and beat the BJP and Sangh Parivar in their own game.

Even though the Aam Aadmi Party (AAP) managed to get only 22 seats in the Punjab Assembly, there is little reason to be disheartened. For a relatively young party to win 22 seats in a state like Punjab in its first attempt is quite credible.

The AAP volunteers, however, will have to face a rampant Sangh Parivar in the Delhi local polls. In these contests, the AAP must be on guard against its opponents who will spread a barrage of false propaganda and baseless rumours. A section of the media will print the BJP propaganda, sidelining AAP press statements.

The swiftness with which the RSS spreads false and even defamatory lies against opponents is a well-known tactic, which can be damaging. This is precisely why the RSS has earned itself the "honour" of being the "rumour spreading society".

When the Sangh gloats about the Modi wave, the AAP can point out that the Akali Dal-BJP alliance in Punjab managed to win just 18 seats even after two terms. In Goa and Manipur the BJP, which was not the leading party won only because of BJP-appointed "friendly governors" and defections. The BJP should be repeatedly asked about its politics of defections and communalism, and if it promises the same to Delhi. 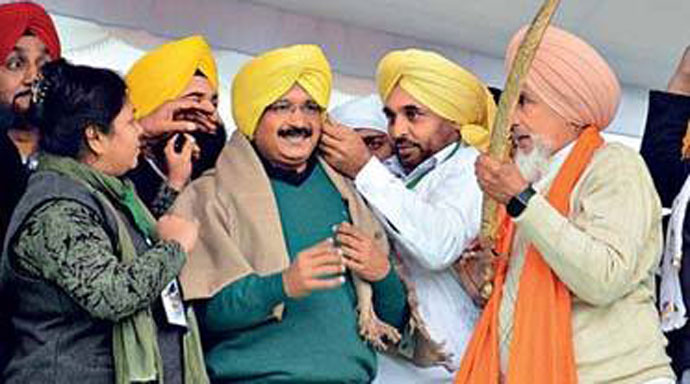 The AAPs development model is very impressive. The harassment of AAP MLAs and volunteers and curtailment of the Delhi government's powers is part of the case to be put before a Constitution bench of the Supreme Court. These facts need to be repeatedly highligthed to bring attention to the struggle that the AAP has to go through while serving the people of Delhi.

It will be a hard campaign, but the AAP won by a huge margin against the supposed long lists of odds against the BJP and the Congress. It holds strong cards and its confidence and development measures in Delhi, would be rewarded by all strata of the people.

Let's look at the facts. The free supply of 2,000 litres of water to the poor is unprecedented. It is combined with subsidised electricity.

The polluting Badarpur power plant has been transformed into a environmentally friendly solar power plant. Government schools with modern infrastructure and other sports facilities are also operational. The Delhi Women's Commission under Swati Mahipal, despite police harassment during the last LG Najeeb Jung's term, has been very active. Mohalla clinics with basic medicines could be extended to some some 20-odd hospitals, which accept recommendations from these clinics for required medical treatment, that is free.

Then there is the progress in building important flyovers at less than the estimated cost. Corruption has been vigorously fought. A minister who was found guilty of corruption was swiftly removed and punished. Another minister who lacked proper qualifications was sacked. In the mohallas, streets and markets, persistent efforts were made to heighten cleanliness and deal with the complaints of the shopkeepers and customers. Overall, the AAP has worked very hard to make Delhi a cleaner, healthier, comfortable and safe place. Much more could be said. But local volunteers are the best source of information in all the localities in which the local elections are taking place.

But, the Sangh after its recent victories will be desperate to defeat the AAP, which has emerged as an increasingly strong secular, pro-people force.

As the stakes are high, a concerted, well-organised campaign is a must. In the 2014-15 Delhi Assembly and Lok Sabha elections, there were usually two rounds of campaigns. That was not enough, especially during the the Lok Sabha. Now, it may be useful to learn from the Sangh mobilisation in Uttar Pradesh.

Firstly, they moved into UP in 2013 and built ties with all communities. That is relevant for the AAP in the sense that there should be multiple contacts with the voters in every ward. The AAP would, apart from the initial contacts in a ward, need to follow up a number of times as necessary. The voter should know the volunteers and candidates as well as their families. Videos showing AAPs achievements and consistent hard work would enlighten voters about the AAPs contribution to a better, friendlier Delhi.

Volunteers should be on high alert for false rumours and propaganda by the rival parties. These should be dealt with counter leaflets, repeated meetings with voters. The more experienced and respected a volunteer or leader, the more persuasive she will sound to even a cynical voter(s). There should be a back-up squad, if more intervention is necessary.

While politics has become more vicious in certain parties, some sections of the media too have become blatantly partisan. The party should use as much TV space as possible. I found it quite useful, though tough, in 2014-15. The party's supporters and sympathisers played a significant role in clarifying doubts about the AAP in the media. But this time around, there will be a high-pitched campaign with both the Congress and BJP targeting the AAP. Of course, the media too is expected to play a similar partisan role.

But a sustained campaign on the ground will largely expose the expected media blitz. Hoards of cash doesn't necessarily will be enough to lure voters. Given the broad spread of the AAP achievements — the Delhi government's systematic work and the fact that it has become the main opposition party in Punjab in its first entry there — are all important issues. What is most important is which party will capture the hearts and minds of the people of Delhi.

This is a challenge and must be met, if the AAP wants to replicate its Delhi Assembly elections success in other areas, and become an increasingly respected national party.

#BJP, #AAP, #Delhi civic polls
The views and opinions expressed in this article are those of the authors and do not necessarily reflect the official policy or position of DailyO.in or the India Today Group. The writers are solely responsible for any claims arising out of the contents of this article.