Why Indians don't stop and ask for directions anymore

I perform the duties of everyman’s general north India compass.

These days, every time I’m out walking, I get asked for directions. It’s happened so many times that I finally turned to Quora with the question: Why me. Looks like only the exceptions of humanity share my affliction. This knowledge didn’t make me feel any better.

In India, we’ve had a long and illustrious tradition of giving wrong directions, for kicks. For a country where giving the wrong answer is part of our sense of humour, my fellow Indians express immense gullible faith in me. The other evening I turned the question on the person asking for directions. I said: "Why does everyone ask me the time of day, so to speak?: He said not a word in reply. He averted his eyes. He thought I was batty.

This year getting asked for directions reached critical mass for me personally. It was progressively getting worse until it’s reached the point where I can challenge anyone to come take a walk with me on any day of the week and confirm this for herself.

There’s a cent per cent guarantee. One of the most common explanations offered for this is that one has what’s called A Resting Sweet Face. By this rationale, Rahul Gandhi must be getting asked for directions a lot. Perhaps even Aamir Khan. But those two don’t have to go walking on broken pavements as part of daily routine. According to urban legend, the sweetfaced are also approached frequently by salesmen and charity workers. This I can vouch for. I have saved a tiger in NehruPlace and bought an encyclopaedia I didn’t need in downtown Dehradun.

I’d gone to Nehru Place to buy a laptop, what else. I ended up donating a fair bit to this famous NGO, whose volunteers spotted me, tracked me, approached me and didn’t let go. When I told my father this over the phone, he asked: "But did you make it to the Dell showroom?" I said, "No, but someone had to save the tiger."

Still, I have trouble accepting the explanation via sweet face. Did I look more intimidating in my twenties and thirties? Does this mean that Beast has transformed into Beauty? More like in my forties I’m dripping with some form of bestial beauty, the defining attribute of an attractive compass. 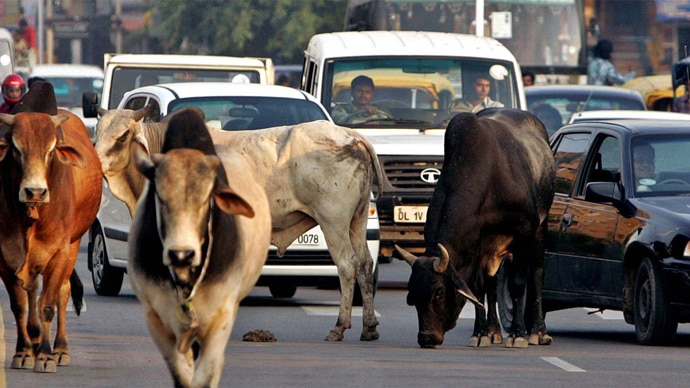 The problem is compounded by the fact that I have the most terrible sense of direction possible. The seeker thinks that I am the seer but nothing could be further from the truth. Once, a college friend of mine from Delhi came to visit me in Allahabad. We were on a scooter, he was the one riding while I was playing navigator.

We went straight past my house to the left and proceeded to get lost in the maze of right angles that is Civil Lines. I’ve grown up in that house and neighbourhood. I should be able to find it even if I were sleepwalking. But I shot straight past it. I wouldn’t ask myself for directions.

I think one explanation is to do with how few people one sees walking down an Indian street. In a market, yes. In a bazaar, yes. In a park, but of course. But just down the road? Rare. Even the servants are on their bicycles. So who does one ask? Me. I often find myself walking long distances on deserted roads.

In Delhi, in GK-1 where I live in R Block, people are always asking me where W Block is. It’s more specific. In Dehradun, I perform the duties of everyman’s general north India compass. I guide tourists to Mussoorie, Rishikesh, New Delhi, and of course the town clock tower, the favourite of everyone playing the direction game.

But Delhi is more aggressive. And Delhiites are warier. I was once in GK-II, on the other side of Ring Road. I was with a friend of mine from Bombay; we were trying to find yet another godforsaken South Delhi house party. We’d found the block and were searching for the house. I thought to myself — I’ve been helping humanity find the right path for a while now. No good deed ever goes waste. Everything that goes around comes around. A girl passed by, walking what looked like a dog of prey.

I said, "Excuse me, could you point us to house number XYZ". She stopped, lowered her eyes to the menacing dog and said: "He bites." She then walked off. I turned to my friend from Bombay and said: "Welcome to Delhi."

They say that asking for directions as an activity is universally on the wane because of the ubiquity of Google Maps. Nostalgists speak of a time when they always asked for directions while driving through a place and thus stumbled upon great secrets, like the best samosa shack or hamburger joint in the area. On being asked for directions, I’m usually too irritated to reveal secrets. Not that anyone asks. All they want to do is get to the clock tower. My face is a map they can’t read for hidden clues.

Post your comment
#Delhi, #Roads, #Google Maps, #Directions
The views and opinions expressed in this article are those of the authors and do not necessarily reflect the official policy or position of DailyO.in or the India Today Group. The writers are solely responsible for any claims arising out of the contents of this article.