Both matas will be proud that you ruined this festival for those it deeply mattered.

Indians are emotional - often violent - especially when it comes to mothers. It’s natural. One word against Ma and one flies into a rage. It’s ironic how often these Indians retaliate with "maa ki gaalis".

In case of India-Pakistan, it will always be “my India first” for most Indians - one hardly asks the question “How is my India?” Religion is savagely sacred too. The holy cow falls third in line.

And what you get when you combine the two biggest issues in India is a vicious mix: a Navratra Jagrata video exhorting the Indian armed forces to the tune of “Aao bachchon tumhein dikhaein...”

Both Bharat Mata and Ma Durga honoured in one video - a sure winner, needless to say.

But who is Durga? She is the destroyer of evil and Navratras celebrate the victory of the Goddess over the demon king, Mahishasura. Yes, Durga is a warrior-goddess and our soldiers may draw their strength from her. Another form of the goddess is the universal mother and it is only natural that children seek comfort and protection from their Ma.

But as much as the mother is fearless and brutal in uprooting the banal army of demons, the Goddess does not oppress the people.

So, when the singer exhorts the Indian Army to “conquer” Pakistan, is he not dubbing the neighbour the land of evil? And that, of course, makes India the righteous, holier-than-thou-land.

Here is a classic example of “East or West, India is the best” ideology. And why not, we revel in chest-beating. It gives us an incomparable high,  perhaps more than the alcohol one would abstain from during the Navratras. 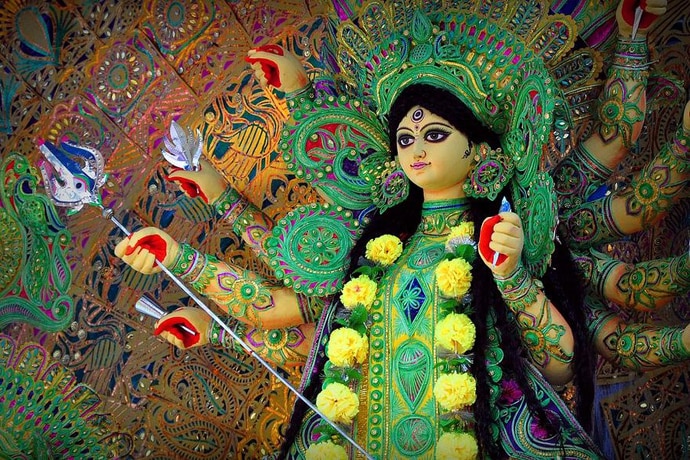 As much as the mother is fearless and brutal in uprooting the banal army of demons, the Goddess does not oppress the people. Photo: Internet

It’s pretty apparent from the video that the participants have forgotten that Navratras is a festival - a celebration. In a way, the participants in this video seem to be overjoyed by the idea of war and bloodshed. Several soldiers die every day on the Line of Control (LoC). The destruction is worse when wars are fought.

No matter which country wins, people are killed on both the sides - such mourning is no cause for celebration.

There are other problems too.

Big Brother complex: We take immense pride in calling our country the jagad guru. WE gave yoga, ayurveda, astronomy, etc to the world. If only. It is the individual who should be credited for these sciences. That the individual happened to be born in the Indian subcontinent is mere coincidence. Enough about the legacy, what is the new-age patriot doing for the country?

Going by the video, he wants Ma Durga to not only grant Kashmir, but the whole of Pakistan as a boon to our brave soldiers. Pakistan, which is a sovereign state, a democracy in shambles - and (almost) a terror state. Even if India annexes Pakistan, will we really be the victorious party here?

Social media’s kripa: The perfect setting. Just like social media tends to do #throwbacks, this 2011 video released by T-Series' Bhakti Sagar YouTube channel, was WhatsApp-ed to me few days ago during the festival of Navratras. Sharing it now when the Indian Army is almost in a war-like situation with Pakistan over Uri attack and subsequent ceasefire violations is perhaps mata ka chamatkar. But why do you need war when you already have this brahmastra? Mourning is no cause for celebration for the Devi.

If you have the guts, go to the LoC, do a sound check and let the loudspeakers blare. Pakistan doesn’t stand a chance. Both matas will be proud that you ruined this festival for those it deeply mattered.

(Double) Bhakt alert?: Read the comment by one Sriram Kumar Joshi, from two years ago: “Modi ji aa gaye he or ye jaldi he mumkin ho jayga.” What will they achieve even if they get Lahore, Karachi and Multan? The governments have always had a tough time managing the territory we call our own. Can we please sort this first?

Perhaps, they should have listened to the prime minister's speech on Gandhi Jayanti, when he said India has never attacked or been hungry for territory. He could, however, have done without praising Indians with the “only fought for others” discourse.

Here’s how not to impress both Bharat Mata and Ma Durga.

Post your comment
#Durga Puja, #Dussehra, #Indian Army, #Bharat mata
The views and opinions expressed in this article are those of the authors and do not necessarily reflect the official policy or position of DailyO.in or the India Today Group. The writers are solely responsible for any claims arising out of the contents of this article.