It now requires more courage than ever before, to keep speaking truth to power, louder and clearer.

We can already hear the well-rehearsed defences from a dispensation which has mastered the act of plausible deniability.

Don't make conjectures, the matter is being investigated. What has this got to do with Modi-Shah? Journalists have been targeted under previous regimes too.

In the storm of platitudes, empty assurances and vile whataboutery that would inevitably follow, and if this is indeed what it evidently seems to be, let us not forget the central point - that the blood of Gauri Lankesh is not only on the hands of those who pulled the trigger, but also those who goaded the killers, stoked their hatred and poisoned their minds.

The words of Vallabhai Patel on Mahatma Gandhi's assassination come to mind - "As the result of the activities of these two bodies [Hindu Mahasabha and RSS], and particularly the RSS, an atmosphere was created in the country in which such a ghastly tragedy became possible."

Having poisoned the well of public discourse and relentlessly demonised opponents (particularly journalists), the ruling dispensation and its apologists claim their innocence over what appears to be horrific, but "logical" consequences.

While no previous government had an unblemished record of dealing with the press, this government is unique in its ideological construction of the media as the enemy, or at least sections of the media which refuse to follow the party line. 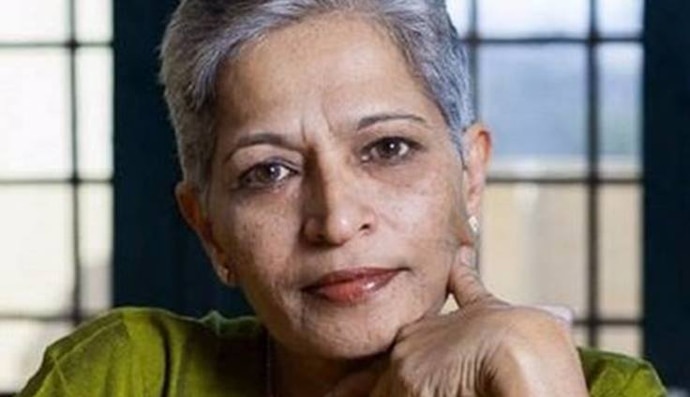 Let us not forget who gave us the word "presstitute" in a naked effort to delegitimise a whole profession.

Let us not forget those who constantly invocate the phrase "Lutyens media" to brand all dissenting journalists as corrupt.

And most importantly, let us not forget those who reflexively target any secular or cosmopolitan journalist as anti-national or anti-Hindu, whipping up feelings of hatred and effectively inciting violence against those who merely seek to speak the truth to power.

Lankesh had herself publicly expressed her worries over the fact that the right to dissent was being threatened, and that people who contradict the ruling ideology are being targeted and made an example of, as she observed in an interview last year.

Having ideologically constructed the media (or rather independent media) as the enemy, the government and their ideological allies then sought to repress them.

This often takes the form of bullying, where armies of trolls target, abuse and harass journalists and activists. These trolls often enjoy the patronage of those in power - in some cases, being paid by the IT cell of the ruling party, in others, the most vicious abusers being followed on social media by government ministers, including the prime minister, an association which they are never too shy to flaunt.

When a lower court convicted Lankesh last year in a dubious defamation case initiated by BJP MP Prahlad Joshi, the head of the BJP IT cell issued a jubilant tweet and chastised other journalists to "take note".

“The idea that the IT cell of the BJP is using this episode as a tool to threaten other journalists is what is shocking," Lankesh had remarked.

Not content with outsourcing the silencing of dissent to bands of online thugs, the government took matters in their own hands this June, in conducting raids at the offices of NDTV, a channel that had taken on the government at a time when many had surrendered.

The use of the state machinery to brazenly attack independent media was undoubtedly a much greater threat to independent journalism than online harassment, and many commentators reached for analogies with the Emergency.

After the bullying and the censorship, comes the violence. We have seen glimpses of ideologically driven violence against journalists under this regime, outside Patiala House court during the JNU sedition case, when right-wing lawyers chanting "Bharat Mata Ki Jai" attacked some journalists, or when ABVP activists roughed up a few journalists in the scuffle outside Ramjas College earlier this year.

However, this gruesome murder marks uncharted territory, and can potentially have a severe chilling effect on the freedom of press, precipitating a new wave of self-censorship and undue caution in handling issues that might be deemed as too sensitive for those in power.

"Modi Bhakts and the Hindutva brigade want me in jail," Lankesh told an interviewer last year, completely unaware that the reckoning would be incalculably worse. After all, shooting down of journalists critical of the ruling ideology on the streets of big cities is something that happens in Pakistan, not this country, or at least so we thought.

Freedom of speech, of which an integral part is the freedom of press, is in many respects the foundational freedom, on which rests all our other freedom and rights.

Without a fearless and independent press to point out violations of citizens' rights, these rights and freedoms will fritter away at the hands of an all powerful state, heralding tyranny and the death of civil society.

Much of the mainstream media, has already lost its critical bearings and become servile to the ruling establishment and its ideology, whether due to eager owners wanting to curry favour with the ruling powers, or purely in the interest of ratings, served better, apparently, by bravado and bigotry than questions and facts.

The murder of Lankesh represents a moment of truth for the shrinking independent media. In the face of multiple threats it faces - bullying, censorship, and now violence - it would be very tempting to shrivel up and just fall in line with the ruling ideology, or at least "moderate" its coverage.

It now requires more courage than ever before, to make the alternative choice - to keep speaking truth to power, louder and clearer - and yet Lankesh's murder should clarify the urgency, and not the futility, of making that choice. The future of our democracy hinges on it.

#Journalist killed, #BJP, #Hindutva, #Gauri Lankesh
The views and opinions expressed in this article are those of the authors and do not necessarily reflect the official policy or position of DailyO.in or the India Today Group. The writers are solely responsible for any claims arising out of the contents of this article.