On grandma and photographs

We call her Nenek, Malay for grandmother.

Grandma stopped eating properly two and a half weeks ago. This was around the time I returned to Singapore from Colorado, the US.

I have spent the past fortnight unpacking my cartons, having shipped them from India. In the boxes lie the various flotsam from my nomadic lifestyle – an iridescent orange lamp which brings to mind the one that the genie wafted out from in the film “Aladdin”; a deer sculpture which I had picked up on the cheap from a street somewhere in Berlin - its style reminiscent of the Scythians’ craftsmanship - sweeping antlers arched behind its sloping back; various chess sets from across the globe, marking some of the countries where I had studied, worked or holidayed in: Egypt, Germany, Indonesia, Ireland, Kazakhstan, Kyrgyzstan, Mongolia, Morocco, Russia, South Africa, Turkey, the United Kingdom, Uzbekistan, Vietnam.

I rediscovered my beloved Praktica MTL 3 camera manufactured in then East Germany, probably a play thing of my father’s. I was inseparable from it in my teens. I now own a Leica.

Every box was like a Kinder Chocolate surprise: I crowed over long-lost items, reunited with offerings of love and friendship from over the years. I had stored several boxes at my brother’s place before acquiring my current pad, and lived on 23kg (50.7 lbs) of check-in luggage while training in Colorado and Baffin Island in the Canadian Arctic this past winter, separated from my belongings which were then enroute from Delhi to Singapore. I had lived in India for some five years. It was a relief to finally have all my things in one place. The author (on the right) with her middle brother at their home. Photo: Eirliani Abdul Rahman

It is a funny thing, memory. I flip through old school report books – to read what my teachers had written about me. Old letters. To see whether things were as I had remembered them. And photographs, piles of photographs.

One evening at dinner, my youngest brother casually mentioned to me that the reason why my parents had taken so many photographs of my middle brother and I when we were little was because they were not certain that he would survive his kidney operation. I was then nine and he was eight. My face must have reflected my shock because my youngest brother said, “You didn’t know?”

I did not know.

Another afternoon, my mother and I sat down and pored through her album collection. In my living room, I now had an entire display of picture frames with photos of my middle brother and me as infants and toddlers. But there was not a single one of my youngest brother.

As my parents grew older, they spent less time on play and taking photographs of us, with the consequence that my youngest brother had fewer photographs, compared to the two of us. So Mama and I spent a couple of hours selecting a few pictures to be given to him, and several that I could put up in my own apartment. 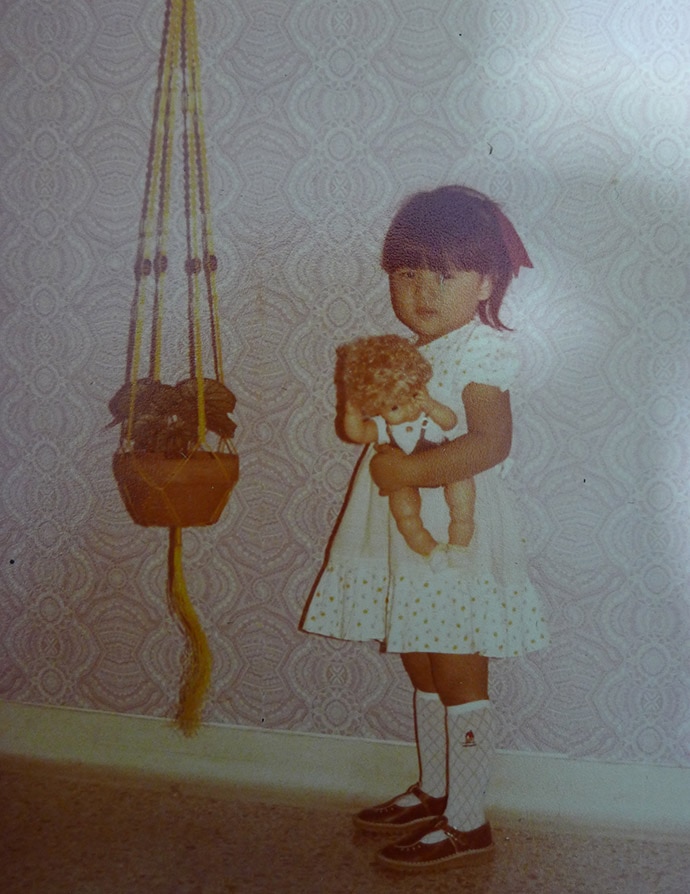 The author as a toddler. Photo: Eirliani Abdul Rahman

Grandma took care of my middle brother and me over the weekends when my parents had errands to run. After my youngest brother was born, eight years after me, this became more frequent. But because she was always busy entertaining visitors, and taking care of her grandchildren – there were at least four of us there at any one point - Grandma never had the time for photographs. I realise now, with Grandma in the last years of her life, that I don’t have one with her alone. Usually, it is group photos that you could spot Grandma in, beaming in wedding pictures and at festive gatherings.

My grandmother’s name is Kenek but thanks to a mistake by a British scribe, her name was transcribed as “Keyneck”, a source of constant amusement for my brothers and me in our youth. We call her Nenek, Malay for grandmother.

Nenek is purportedly of royal lineage, from the house of Solo on the island of Java, Indonesia. I do not know much about her childhood, save that she had helped raise step sisters who were much younger than her. She is diminutive in size, and prefers to be in the background.

In 1964, when racial riots took place in pre-independence Singapore, Nenek took to protecting her Chinese best friend by telling other Malays – if they were walking through a predominantly Malay neighbourhood - that her friend was Malay. Her Chinese best friend returned the favour whenever they walked in a Chinese area.

They both spoke Hokkien – a Chinese dialect - and Malay, and my grandmother is very fair, so it was not difficult to keep up the façade. My grandmother also spoke Japanese, harking back to the time Singapore was under Japanese occupation. The author (on the right) with her cousin at her grandparents' home. Photo: Eirliani Abdul Rahman

Nenek bore six children, my mother being the third child and the second daughter. My mother’s family was probably unusual at the time with my grandparents being both multi lingual. My grandfather spoke Malay, English and Japanese. Theirs was the first home in the neighbourhood to own a television set. My mother remembered kids clambering to watch the telly from outside the windows.

Nenek used to busy herself in the kitchen, delighting in making treats for us grandchildren such as epok-epok (fried curry puffs), pisang goreng (fried banana) or jemput-jemput (fried banana dumplings). My middle brother and I would eat ridiculously copious amounts, running in and out of the kitchen as Nenek prepared yet another batch.

“Jangan lari (don’t run)!” she would shout after us, concerned. We would giggle, ignoring her.

It was bliss. My cousins, my brother and I would watch TV or play games. She was always somewhere in the background: watchful, never interfering.

I visited my grandmother last Sunday. She had shrunk, doll-sized, curled up in a fetal position, her fair skin drawn tightly over her high cheek bones. Her cheeks were ruddy, her hair as white as I had remembered them. My aunt, my mother’s youngest sister, was rubbing in some lotion gently as Nenek’s skin felt itchy.

“Gatal,” she would say mournfully, repeatedly, in Malay. It meant “itchy”.

“Yes, Mother,” my mother and her sister would say, to soothe her. Her skin seemed fine. Nenek no longer recognised any one of us.

I held her right hand and brought it to my nose in a ritual called salam in Malay culture, meant to honour our elders. “Nenek, it’s Lin,” I said, using my pet name. Nenek looked bewildered.

At one point, my aunt started crying.

“I can’t bear to see her like this,” she said. I wanted to reach out and comfort my aunt. She was, and still is, my favourite aunt, but I didn’t.

Nenek’s younger step sister was there too. The latter had brought along her daughter and son-in-law. When it was time for her to leave, she kissed Nenek’s hand gently, trying to hold back her tears. She half-whispered to my youngest brother who was standing close by, “She took care of us when we were young.”

Fighting harder to hold back her tears, she turned back to Nenek, while gently caressing her face, “We’ll return, ok? Don’t you worry, we will return.”

Today, I returned to see Nenek again. My favourite aunt had raised the alarm this afternoon, having found her having great difficulty speaking, and a weak pulse. I arrived with my parents, my mother preternaturally calm. I half-wondered to myself how I would be if it was my mother.

I sat next to her bed, alone, my aunts and mother busy elsewhere.

I whispered some prayers, and Grandma suddenly seemed alert, looking straight at me. She held my hands in both of hers.

Turning my face away from Nenek, I yelled, “Aunty? Aunty!! Nenek is alert again.”

Apparently, Nenek had had low blood sugar levels, a situation easily ameliorated by giving her milk which she was able to consume.

The mood is perceptibly lighter now. Cousins – and their children whom I had not yet met – and our respective parents mingled, chatted.

When it was my turn to leave, Nenek seemed to sense this, holding my right hand again. “Bye,” she said in English. Switching to Malay, she added, “Terima kasih (thank you).” And then brought my hand to her nose in the time honoured tradition. I was stunned. My oldest aunt watched in quiet fascination, just across the bed from me.

“Mama,” I said. “Nenek just said goodbye, and did the salam to me.”

My mother and her sisters, looked on from the foot of the bed. They did not say anything.

Also read - Why every girl needs a BFF

Post your comment
#Death, #Childhood, #Relationships, #Grandmother
The views and opinions expressed in this article are those of the authors and do not necessarily reflect the official policy or position of DailyO.in or the India Today Group. The writers are solely responsible for any claims arising out of the contents of this article.