What good is India's growth story if mothers and children are dying of hunger?

There is a deliberate attempt to hide and deny the numerous problems by a government anxious to build India’s image as powerful.

The country that has all the resources to send an unmanned spacecraft Mangalyaan to Mars is unable to save its children from starvation and sudden deaths. The International Food Policy Research Institute, in its Global Hunger Index, 2016, ranks India 97 among 197 countries, showing that despite its enviable economic growth, the health and starvation crisis in the country is worse than 25 sub-Saharian countries and practically the worst in Asia, with only Afghanistan and Pakistan trailing it.

According to Global Hunger Index, around 180 million Indians are unsure about accessing the daily square of meals.

Article 39 of the Constitution upholds that children are to be provided opportunities and facilities to develop in a healthy lifestyle and manners. Their heath needs are covered under the larger governmental policies, programmes and schemes, but everything turns into a sham exercise at the grassroots levels.

There are innumerable central and state government schemes to develop the impoverished, tribal-dominated and naxalism-hit Koraput-Balangir-Kalahandi (KBK) region of Odisha. Yet, the infant and maternal mortality rates of KBK’s 11 districts are alarming.

Every year, 1,400 children lose their lives in Nabarangpur district alone. According to the data available for last three years, 4,338 children died in this particular district.

Recently, a report on the ordeal of a pregnant tribal, who was carried to the hospital by her family members for some 3.5km for the lack of an ambulance in Umerkote area of Nabarangpur, showed the healthcare situation in the region isn't really, though India is shining at large. I was a witness to the tragedy. 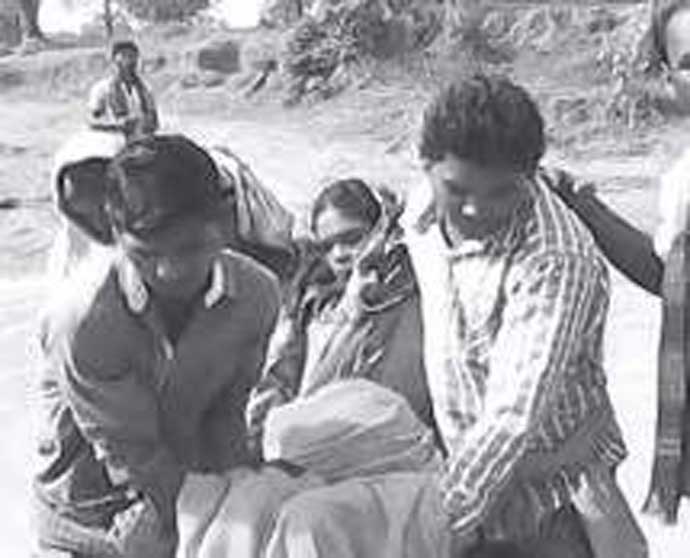 A Damuni Gond from Odisha being carried by her family members to the hospital for the lack of an ambulance. Photo: The New Indian Express

In Malakangiri district, the maternal mortality rate stands at 245 against the state average 200. People experience a virtually sub-Saharan life with scarce development activities and livelihood sources. Almost all the tribal girls get married by the time they attain puberty and 43.1 percent of the pregnant women in the district receive no antenatal care.

Prominent Odia daily Samaja reports that more than 50 per cent of the pregnant women give birth at home, unaided and unattended. Strident efforts to provide antenatal care and skilled birth attendants for every pregnant woman in the country are the need of the hour.

India's growth story looks good until one begins to pay attention to the stories of tribal women and children from the hinterlands of rural deprivation. Stories you may never read in the newspapers, unreported accounts of invisible lives, citizens displaced from their land and robbed off their livelihoods — those who prefer suicide to selling their dignity, whose children go to bed hungry every single day.

There is a deliberate attempt to hide and deny the numerous problems by a government anxious to build India’s image as powerful, emerging economy with promising trade opportunities. There is a rush to participate in global events, be it trade meets, film festivals or diaspora gatherings.

Tim Wise, an American essayist aptly summed up India’s policy in his blog: “Indian elites practice ‘Poverty Denialism’ which is a culture of cruelty. Bashing the poor Indians for no reason becomes Right-wing amusement.”

Recently, Union minister Venkaiah Naidu said that seeking loans and asking for waiver has become a fashion. With 20.6 percent share of world’s poorest, is India shining? Is economic growth good for billionaires or India's billion citizens?

Nobel Prize winner and eminent welfare economist, professor Amartya Sen recently said, “It is now a clearly established reality that even after gaining high growth rate and increasing per capita income, we have failed to protect our children from hunger and diseases. I feel the questions of resources is not big one, a lot of money is spent but situation is not improving with accordance with our expenditure because our delivery system are the worst, unaccountable and non-responsive towards the most marginalised like children.”

Evidently, only strong political will and greater financing can ensure child and maternity healthcare become a priority for India.

Quality healthcare needs to reach every child and every woman in the country, irrespective of class, caste, gender and location.

Only then can India shine.

#Maternal Health, #Healthcare, #Tribals, #Women
The views and opinions expressed in this article are those of the authors and do not necessarily reflect the official policy or position of DailyO.in or the India Today Group. The writers are solely responsible for any claims arising out of the contents of this article.

The author is a tribal and environment activist.