Indian Army personnel are also humans and have made mistakes but no official has worked for personal gains in conflict areas.

In 1994, the Allahabad High Court was on the target of goons belonging to a particular political party. On the request of the chief justice, I as a young officer, led a column of soldiers into the court complex to tackle the situation.

The chief justice feared for the safety of his staff. He was also worried about his own safety because his office had been ransacked by the same goons. It was the arrival of Army that finally restored confidence in the chief justice, his staff and other advocates that they could work in peace.

In July the Himachal High Court called in the Army to evict encroachers from five villages in Shimla after the police and local authorities failed to do the job.

Just last week, the Uttarakhand High Court warned that if the state failed to protect tigers, it may be compelled to seek the assistance of ministry of defence and deploy the ecological task force.

The Indian Army is called in every major disaster natural or man-made, a calamity or an uprising.

As a force, the Army has never let down the nation. At the time of the Sikkim earthquake in 2011, Army personnel left their own damaged camps to rescue the civilian population.

During the 2014 Kashmir floods, Army men were out to save lives ignoring their own families. They did their job even as stones were pelted at them while trying to take people to safer locations. 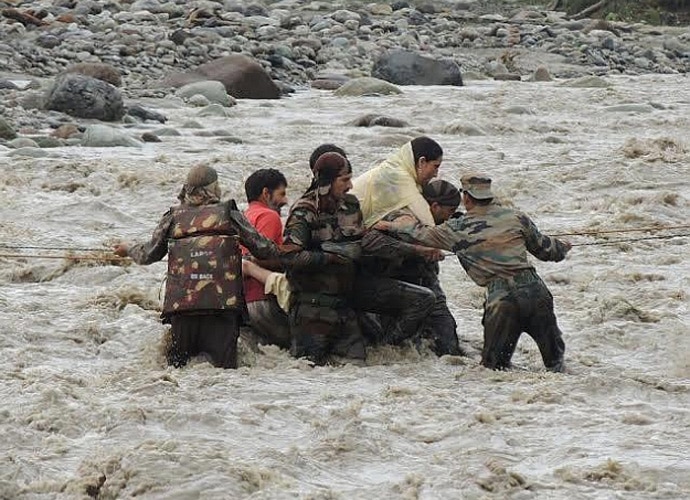 In every insurgency and proxy war that India has faced, it has been the Army which has fought back to restore the situation, whether it be Nagaland, Manipur, Punjab or now Kashmir.

In each case the Army suffered losses and operated with its hands tied, braving casualties, but seeking to protect locals.

In 2015, a column of the Army was ambushed in Manipur, leading to the death of 18 soldiers.

There have been similar incidents in the past in both Nagaland and Manipur, yet the Army has never retaliated against those supporting insurgents.

While Army personnel are also humans and have made mistakes, no official has worked for personal gains in conflict areas.

In October 2016, the parents of Lt ET Joseph finally got an opportunity to visit his grave in Nagaland, where he was buried after being killed in an encounter in 1992. His remains were shifted back to his home town after 24 years. Most of those who were martyred in remote locations in the early days of the insurgencies in Manipur and Nagaland had their last rites performed in there itself as there were no means available to carry their remains back to their families across India.

The peace that prevails in Nagaland and Manipur today is a result of the Army's relentless pursuit of those working against Indian interests. The insurgent groups have never missed an opportunity to target the Army as it is the one force they fear.

The Army is 'enemy number one' both for the insurgents and their supporters as it has always operated with impartiality and struck hard at the will of the insurgents, whom the locals have supported.

There have been instances where the Army had to apply pressure on locals because for any insurgency to survive, local support is essential. There may have been occasions when the quantum of pressure applied was excessive. However, it has always been for the larger cause of national security and never for any personal gains.

A soft approach is no solution to deal with violent insurgencies. The Army is compelled to adopt a tough stance in such circumstances and that is why the government has enacted the Armed Forces Special Powers Act (AFSPA).

The law allows a certain degree of protection to those who work in difficult situations. The tendency to conduct post-mortems of armed action post the resolution of crises, conducting inquiries against those who risked their lives is not in the right spirit.

Many Army personnel deployed in conflict zones suffer trauma and stress. Many have to witness the deaths of their close friends. To question them now, for actions taken or ordered decades ago is inhuman because it would compel the said officers to relive the trauma that they have been trying hard to forget.

There are many organisations within the nation, some financed by inimical forces and some with vested interests, which would seek to ensure that the morale of the nation's ultimate source of power - the Army - is impacted. They would challenge the Army's involvement in every operation, blaming it even if it is right, seeking to hurt its reputation and honour.

The hearing in the Supreme Court against the Army operations in Manipur, presently underway, should not become a witch-hunt against those who operated in the state, restored government control and established peace. It should be aimed at modifying existing rules of engagement to reduce undesired casualties.

The witch-hunt would not bring back those who died but only force Army personnel who continue to battle anti-nationals to slow down their operations. This would be detrimental to the nation, its freedom and growth.

The Army has over the years become the easiest target for all who seek to discredit it, as it hardly responds to criticism.

I request the learned Supreme Court judges to visit the troubled areas where Army personnel are deployed and see the pressures under which they work before ruling against any official.

This would ensure the Army carries out its job of safeguarding the borders and maintain peace and stability in the country with greater confidence.

Post your comment
#Insurgency, #Afspa in manipur, #AFSPA, #Indian Army
The views and opinions expressed in this article are those of the authors and do not necessarily reflect the official policy or position of DailyO.in or the India Today Group. The writers are solely responsible for any claims arising out of the contents of this article.