There is no sign of any effort being made to resolve the conflict and end the cycle of violence.

Yes, optimism is a virtue — but when I sat down to think about the year that has gone by for the state of Jammu and Kashmir, it looked like a vice.

What else can one think when the first thing that comes to your mind about the year 2018 is the gruesome gang-rape and murder of an eight-year-old girl in Kathua.

She was abducted, drugged, repeatedly gang-raped for days. 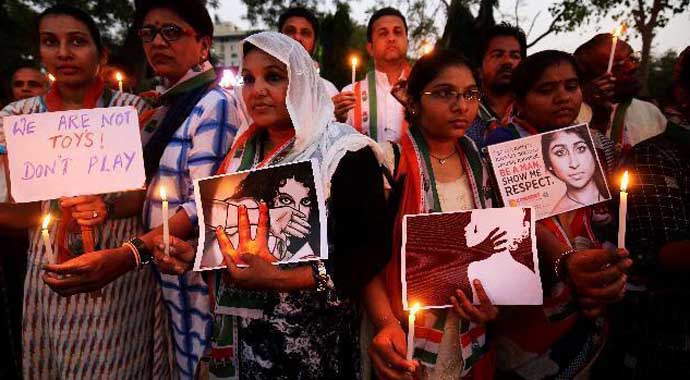 The news of the rape of an eight-year-old girl in Kathua left J&K and the entire country shaken. (Source: Reuters)

According to the investigations, the nomadic girl was abducted on January 10, drugged and held captive inside a temple whose caretaker was reportedly one of the main conspirators. Her body was found on January 17. During this time, the investigators said, she was starved and raped before being murdered.

The most shocking part about the incident was that the child was raped and murdered reportedly to drive out the community to which the victim belonged from the area.

Even worse was the shameful politics played on the issue. Many in the area started taking out protest rallies in support of the accused and were seen waving the national flag. A few ministers of the then-state government were also seen fanning trouble and supporting the protesters. The case had to be shifted from the region and is still being heard by the trial court.

The year 2018 was also one of the deadliest in terms of violence in the conflict-torn Valley. As per official figures, the death toll for militants and security forces was 324 till the month of December — this is the highest in Kashmir at least in the last 10 years. More worrying are the civilian casualties the year claimed. Human rights groups put civilian fatalities at over 100.

It was a year which saw major offensives being mounted by both militants and security forces. Emboldened by the increase in recruitments, militant groups like Hizbul Mujahideen seemed to be targeting security forces right from the beginning. The group also openly targeted civilians whom they blamed to be working for the security forces as informers. Many killings were filmed as well. The cycle of violence intensified in 2018. (Source: India Today)

The militant groups also used the tactic of kidnapping relatives of policemen living in rural areas of the Valley. The security forces on their part went on an all-out effort to kill the militants.

The first month of the year itself witnessed the killings of nine militants and seven civilians — and since then, there hasn’t been a single month in the year which didn’t see more than two dozen lives being lost in gunfights.

The deadliest month was November, followed by September, October and August, which saw the loss of more than 40 people each. One of the lowest points was the killing of prominent journalist Shujaat Bukhari in Srinagar in the month of Ramzan.

There was also a definite pattern in which civilians were getting killed during the encounters. The security analysts saw a worrying trend of civilians not caring about their own lives and heading towards encounter sites in a bid to save militants.

The common citizens in Kashmir also had to face a loss of their homes. Close to 95 encounters were reported through the year and almost all saw security forces blasting the houses in which they suspected militants to be hiding. On December 9, seven houses were razed to the ground during an encounter in the Mujgund area on the outskirts of Srinagar city. A 14-year-old boy who had recently turned into a militant was one among the three militants killed in the gun battle.

This year can easily be qualified as ‘the year of no government’ for the state. There was palpable tension among the two alliance partners, the PDP and the BJP, right from the beginning. The fissures were visible as the BJP seemed to be favouring its two ministers who had participated in a rally supporting the accused in the Kathua rape case, while the PDP spoke out against them.

In the month of June, the BJP suddenly decided to pull out from the alliance, sending the state under Governor’s Rule. The state has been under the direct control of the Centre since then and many are looking at this as extremely unhealthy, given the fragile nature of the state’s polity.

One of the high points for the Centre could be the holding of urban local body elections after a gap of 13 years in the state.

The Centre decided to go ahead with the municipal and panchayat polls, despite boycott calls by the mainstream parties such as the National Conference (NC) and People’s Democratic Party (PDP).

The municipal polls saw an abysmal voter turnout of around 4 per cent on an average.

The turnout in panchayat polls was comparatively better but most parts of south Kashmir saw almost zero participation. Several candidates were elected unopposed.

Another low point was hit politically when the two regional parties — the NC and PDP — did the unthinkable and tried to stake claim to form the government. Governor SP Malik hurriedly dissolved the Assembly and apparently stalled the move. Many have called Malik’s decision undemocratic and unconstitutional. Governor SP Malik's move to dissolve the J&K Assembly has been criticised by many. (Source: India Today)

Kashmir needs a resolution to end the cycle of violence in this protracted conflict. But 2018 hardly saw any effort being made by the central government to initiate talks with separatist parties or Pakistan to try and bring some forward movement towards peace in the Valley.

On the contrary, there were deep apprehensions among the people over the strategy adopted by the central government which failed to clarify its stand on issues like Article 35A and special status for the state.

Every time a leader pointed to the need for dialogue with separatists, s/he was criticised for being 'anti-national'.

Given the nature of the region and its dynamics, the attitude from New Delhi really summed the year up as one of the most ineffective in terms of trying to find solutions to the real problems plaguing the Valley.

The year turned out to very gloomy for the people of J&K.

Political experts don’t see things changing in the near future. Still, there is hope for a better future in 2019.

Let us not leave the path of optimism.

Also read: The 5 leaders whose political fortunes revived in 2018. What 2019 holds for them now

#Civilian deaths in kashmir, #Militancy in kashmir, #Kashmir crisis, #Kashmir conflict
The views and opinions expressed in this article are those of the authors and do not necessarily reflect the official policy or position of DailyO.in or the India Today Group. The writers are solely responsible for any claims arising out of the contents of this article.