Malayalam actor's assault case: Why I feel the entire film industry is complicit

What superstar Dileep did not expect in his 'script' was a strong woman character, unlike the submissive ones in his movies.

When actor Dileep was arrested on July 10, I wasn’t shocked. He is said to have conspired with a local goon (also his close friend) to molest and threaten a co-star, an actor who started her career with Dileep.

There is nothing surprising or shocking about this.

In fact, I would not be shocked even if veterans like Mammootty and Mohanlal were arrested. Even though a few new-age actors have come out in support of the female actor, if there is one thing that's constant about the Malayalam movie industry, it is misogyny.

Not the subtle, layered kind, but the blatant, in your face one. Be it the old male actors or the new ones.

Dileep says he believed the actor created a wedge in his earlier marriage and ultimately broke it up. She apparently informed his first wife, Manju Warrier — a critically acclaimed brilliant actor who has made a comeback after escaping the shackles of a limiting marriage — of his affair with another actor who later went on to become his second wife.

Dileep must have been infuriated. How dare a woman who plays a "secondary role" in movies and life take such an audacious step, lead Manju to divorce him and be part of much better, fleshy movies? 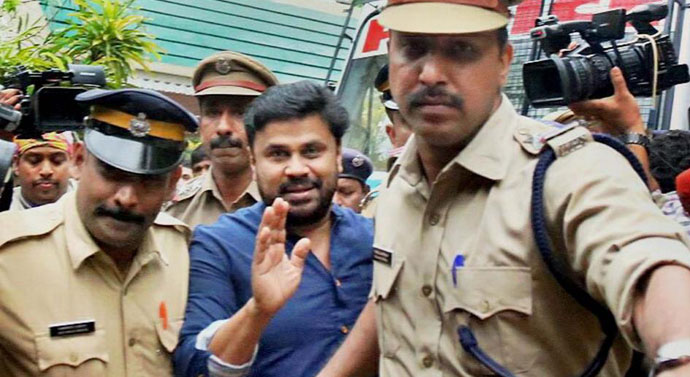 Dileep, who was arrested in connection with the abduction and assault case of a Malayalam actor, being produced before the magistrate's court in Kochi. (Credit: PTI photo)

So, he does what he has mouthed as dialogues in many of his movies — pay a goon to molest the informant and threaten her with the video.

But what Dileep did not expect in his script was a strong woman character, unlike the submissive ones in his movies whom he moulds as he wills and receives overwhelming "family" applause in theatres as a return gift.

He thought the actor would shut up and spent the rest of her life in depression and fear. When she lodged a complaint, the entire Malayalam film fraternity was shaken. And by fraternity, I mean the pseudo-macho men who sit at the helm till they decay and mix with mother earth.

The Association of Malayalam Movie Artists or AMMA, as it is ironically called, doesn't have a single female actor in any of the key positions. They held a protest meeting just after the incident where all the great actors, including Dileep, spoke about "protecting sisters in the organisation and state" and "nabbing the culprits". Only two women spoke at the function.

So, why is it surprising to see a superstar stoop to such lows in an industry where movies filled with sexist and misogynist dialogues are upheld, and strong, outspoken women are informally banned and women-centric movies are as few as it can get.

After all, you are the work that you do. And see how every actor was scrambling to defend him. What were they actually defending and justifying? The actor or the deed? The deed they might all have been guilty for once. Or, are they scared that through initiatives like Women in Cinema Collective, Malayali female actors are actually speaking up?

#Molestation, #Cinema, #Dileep, #Malayalam actor
The views and opinions expressed in this article are those of the authors and do not necessarily reflect the official policy or position of DailyO.in or the India Today Group. The writers are solely responsible for any claims arising out of the contents of this article.