Our collective indifference of the Northeast may pinch those who live there, but it no longer deflates them.

Two different pictures, both with the same narrative. Football in India may never be the same again after the relegation to champions story of the Aizawl FC in what many are calling the Leicester City moment in Indian football. The club's title win in the I-league made up for the lack of confidence by most who had dismissed the team as a bunch of rejects.

A national daily ran this headline, "Club from nowhere scripts Indian footballing fairytale" as Aizawl sensationally burst onto the scene and pushed heavyweight Mohun Bagan to be the runner-up. Whether the newspaper meant sports anonymity or geographical backwaters is anyone's guess, but even after being crowned champions, it's not the end. The media can now only write about the team from a "remote corner" of India.

The level of Aizawl team's success can be measured from this one statistic alone, the total budget of the club was reportedly less than what Bagan had spent on one particular player.

While the team was scripting history on the field, a group of students in Manipur on a study trip was also made to work hard. They had to abandon their seats mid-way and instead resort to muscle power, as the bus they were travelling in got stuck in mud. But the devil is in the detail: those who pulled the bus out were all girls.

I could have had the perfunctory female power reaction, but my first thought was, if this bus was from one of the private schools in Delhi, it would have remained stuck and truckload of parents would have instead sent fancy cars to pick up their daughters. Someone responded to my public comment saying not just that, there would even have been a dharna! 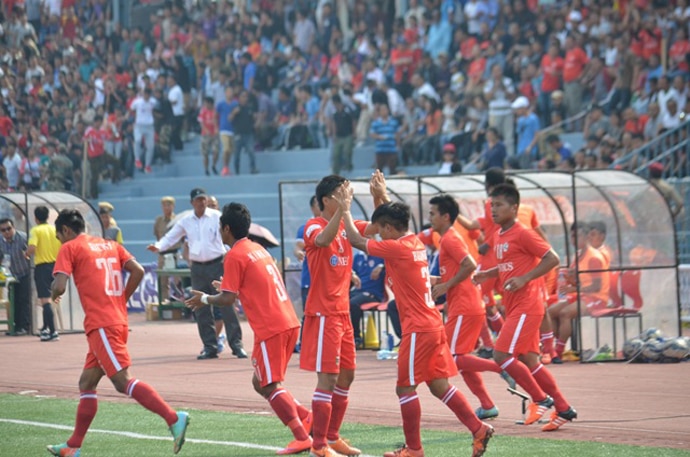 The media can now only write about Aizawl FC from a 'remote corner" of India. Photo: Reuters

For the North Indian, especially residents of the now loosely-thrown phrase "Lutyens Delhi", there is a thin line between drama and reality. For them, anything south of the Vindhyas is irrelevant and the Northeast is only about momos and Mary Kom.

So, we probably found it appealing in a condescending sort of way that a group of nondescript football players won only because of their belief. Nor will it take us time to move on from the novelty, after all we are a country that puts Priyanka Chopra on advertisements when talking about boxer Mary Kom's achievements.

For that matter, Olympians like archers Bombayla Devi have no chance of even advertising Lifebuoy soap.

Instead, "chinki" still slips out naturally from most of our tongues, if there is one thing that downright beats our superiority complex it is our ugly face of racism.

Lajpat Nagar in Delhi is a bustling market that sells everything from linen to utensils. Thousands of pedestrians rub shoulders with vendors daily, yet, we managed to find that one north-eastern three years ago and battered him to death. Things are not that different even now. In March, a student was allegedly attacked by his landlord in Bengaluru for using extra water. If that wasn't bad enough, after being beaten he was also reportedly asked to lick the landlord's shoes.

Sadly, the only reason North India is discovering the seven sisters is because after Thailand, we need a new holiday spot. When my fruit seller assures me that the exorbitant watermelon is "organic" because it is from Manipur, I do want to trust him, but somehow living in Delhi, it is easier to become a cynic. The "mandi" next door seems more probable.

But there are many who want to believe in the story of the Northeast because it's time was yesterday. Yet, in a reflection of how we have failed to assimilate people from all around the country, even something as mainstream as Bollywood only had the one Danny Denzongpa.

Maybe we need to learn lessons from Hollywood where Sidney Poitier, Samuel Jackson, Will Smith to name just a few became an integral part of the film industry decades ago.

Today, as Aizawl's footballing achievement shows, our collective indifference of the Northeast may pinch those who live there, but it no longer deflates them.

We can keep convincing the rest of the country that Kejriwal's antics are pan India or violence in our campus bothers all, but the reality is that even a chain of anonymous Manipuri girls can show us that empty noise on social media is not power.

For now, though, let's hope the Meghalaya chief minister and his leader of the opposition join in the football celebrations across the region and sing, encore, their joint rendition of The Beatles classic, "All my loving".

Also read: Why Bengaluru Football Club (and their fans) are always a good show

#Manipur, #Aizawl FC, #Northeast
The views and opinions expressed in this article are those of the authors and do not necessarily reflect the official policy or position of DailyO.in or the India Today Group. The writers are solely responsible for any claims arising out of the contents of this article.