BJP is lucky Gau Mata can't say Not In My Name

Here's a ready reckoner for those who can't make sense of what the beef is about.

Are you utterly confused by the exploding protests, arguments, counter arguments and bickering every time a religious hate crime, caste atrocity or lynching is in the news? Media debates have typically been reduced to political party spokespersons and the commentariat lashing out at one another with whataboutery (for instance, where were you when Aurangzeb killed Hindus to 1984 Sikh riots et al), and other asinine accusations of faux protests, elitism, Hindutva humiliation and other sundry grievances.

So, if you want some forthright answers, here’s a ready reckoner to find some clarity in all the bilge flying around. Modi's message: Did Prime Minister Narendra Modi reaffirm his devotion to the RSS ideology as a true pracharak when he took a mild swipe at the murderous cow vigilante groups at Gandhi’s ashram in Sabarmati? First, Modi termed it gau bhakti (devotion for the cow) rather than raksha (protection) when he declared that killing in its name was not acceptable and that Gandhi would never approve of it.

He also couched his jab at the lynch groups in a warped story about how as a child, he had heard the legend of a distressed and guilt-ridden cow who refused to eat after trampling and killing an only child, who had come to the childless couple after many years, thus confirming the holy status of gau mata. 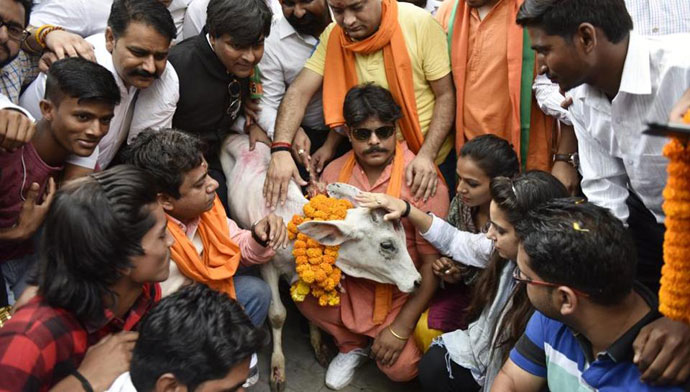 Modi termed it gau bhakti (devotion for the cow) rather than raksha (protection) when he declared that killing in its name was not acceptable and that Gandhi would never approve of it. Photo: HT

Let it be clear to all the fans of Development Man, Modi is not just an ardent pracharak but will do everything to wow the BJP and Sangh’s papal head, the RSS; and so will never take the names of Muslim victims of lynch mobs, or even utter a word of comfort to families who have lost a loved one, while only scolding the attackers like an indulgent senior.

It confirms that the Sangh patriarchy does dictate to Modi, that he must adhere to the Hindutva ideology, and they will tolerate no deviation. Remember, no one from the Modi Cabinet attended President Pranab Mukherjee’s official Iftar party this week, breaking protocol and established custom.

Why do they not weep for police officer DSP Ayub Pandith who was lynched and killed outside a Srinagar mosque during Friday prayers in the last week of Ramzan, they ask, but hold protest marches for 16-year-old Junaid who was lynched while returning home after shopping for Eid?

Or as RSS ideologues never fail to wail about RSS workers killed by rival CPM comrades in Kerala?

For starters, Kashmir is a conflict zone and in a perpetual state of alert, where Army battalions and police commandos stalk the Valley with jackboot force combating Pakistan-sponsored militancy, squashing and throttling every anti-state protest, stone pelters as well as anti-India eruption with their might and weapons.

In Kashmir, it is the State versus the people, and unfortunately, DSP Pandith represents the repressive and unjust power of the state for Kashmiris, and became a victim in the macabre war raging in the Valley. How does this compare with the rest of the country where the Constitution and rights and freedoms supposedly prevail, but where law-abiding beef eaters and transporters are pulled out of their homes and trucks, and lynched in towns and highways; based on rumours and hearsay that they are either hoarding or ferrying cow meat?

It’s majoritiarism at play – conform or perish; an outright communal attack based on hate politics that has poisoned the air.

Similarly, how does a political battle in north Kerala, where the cycle of killings between CPM and RSS workers has gone on for five decades, compare to hate murders in the rest of the country?

Who can compare the murders of 50-year-old ironsmith Mohammad Akhlaq of Dadri and 16-year-old Junaid of Khandawali, among the dozen others who were killed amid anti-Muslim chants and invectives, and the political killings of party workers in Kerala?

Obviously, RSS ideologues like Rakesh Sinha who incessantly bleat about RSS workers' murders believe Muslims today are to be blamed for all the historical hurt and grievances that prevailed during the Mughal rule, and can be lynched at will by the Hindutva fold.

There’s an emerging theory that recent national and international demonstrations like #NotInMyName are not just elitist and pretentious, but also isolated, fanciful and unreal — a reverse whataboutery where questions are raised not only about their sincerity and worth, dress and lifestyle, but also what they have done for Dalits, tribals, women and other disenfranchised groups.

Columnist Shivam Vij went on to say liberals are falling into the Hindutva trap of polarising people by protesting for Muslims, beef and cows. It’s a daft theory – the last general election showed that 31 per cent voted for Hindutva but there’s still the 69 per cent who refuse to succumb to Hindutva politics – and it’s only a political battle that will decide which side will win.

However, it’s time for a coalition of forces from Kashmir to Dantewar, Kerala to Mizoram, uniting tribals, Dalits, women, Muslims, Adivasis, students and others.

It’s now fashionable for Sangh spokespersons to bring up concerns of police reform when they are cornered, but they are quick to add there should be reform in politics first, or all reform is ineffectual. This is because the parivar actually believes in a tough and ferocious police-military force, which smashes any dissenting voice as anti-national, anti-state and anti-majoritarian.

But there are no answers for the cluelessness of the J&K administration, with such a vast network of sophisticated intelligence and surveillance, to find the killers of the slain Kashmiri DSP.

Or for that matter the vigour to find the killers of the many lynchings that have taken place in the name of the cow, from Jharkhand to Rajasthan. The reform bluster is to cover up for a pliant police and bureaucratic administration, which is tardy about preventive measures, prompt investigations and the conviction of murderers.

On the other hand, senior Cabinet colleagues of PM Modi deem the lynching and murders to be a law and order problem, and insist the law is strict and that the accused will face murder charges, and that people should refrain from making it an issue of religion.

Er, the lynchings are in the name of Gau Mata (Holy Cow), the attackers are always Hindutva followers who believe there has to be a countrywide ban on beef, the victims are always Muslims (except in Una and other districts where Dalits were attacked), lynched amid invectives and slur about their religion; and, according to a study conducted by IndiaSpend, more than half the cases of cow-related violence are reported from BJP-ruled states.

Ever wondered why beef or a cow head is found in temples, or cow slaughter rumours swirl just before an election, Eid or a Hindu festival?

#Not In My Name, #Mob violence, #Junaid Khan
The views and opinions expressed in this article are those of the authors and do not necessarily reflect the official policy or position of DailyO.in or the India Today Group. The writers are solely responsible for any claims arising out of the contents of this article.