Why yoga's influence is growing in Putin's Russia

This article has been jointly authored by Sudarshan Ramabadran and Shreya Chellagalla.

One of the first names that comes to mind in relation to the word "yoga" is Swami Vivekananda and distinctively so. It was in Boston, USA, that he first spoke about India's gift to the world. When introducing yoga to the West then, Swami Vivekananda elucidated that in addition to physical posturing, yoga is about strengthening the mind. The Bhagavad Gita, too, states that "yoga is the journey of the self, through the self, to the self" and refers to all forms of yoga such as Karma Yoga (path of action), Bhakti Yoga (path of devotion) and Jnana Yoga (path of knowledge), in addition to physical posturing (Raja and Hatha Yoga).

For Swami Vivekananda, yoga is "for the worker" and it is "a union between man and the whole of humanity; to the mystic, between his higher and lower selves; to the lover, a union between himself and his God of love; to the philosopher, it is a union of all existence."

In an article on yoga a few years ago, TIME Magazine made an observation that "while the East treats the man, the West treats the disease." Learned Indian scholars have pointed out that the core underlying thread of Indian civilization is happiness, which makes understanding one's inner self and connecting with spirituality as key. The core of spirituality is examining each and every experience and knowing exactly what one is searching for. Any form of yoga in all certainty helps one do that. Swami Vivekananda said that in addition to physical posturing, yoga is about strengthening the mind.

Prime Minister Narendra Modi, in addition to calling yoga "a passport to health assurance" rightly defined it as a journey "from I to we", thus symbolising the journey of oneness. In his address to the United Nations General Assembly he said that "yoga is an invaluable gift of ancient Indian tradition. It embodies unity of mind and body, thought and action, restraint and fulfilment, harmony between man and nature and a holistic approach to health and well-being. Yoga is not about exercise but to discover the sense of oneness with ourselves, the world and nature. By changing our lifestyle and creating consciousness, it can help us to deal with climate change".

The United Nations resolution on International Day of Yoga (IDY), aimed at promoting healthy societies, was passed within 75 days of the Indian Prime Minister's speech. The resolution was also co-sponsored by a record 177 countries. From Swami Vivekananda positing yoga as India's composite soft power, to Oprah Winfrey hosting a dedicated show on it, to yoga being an integral part of the annual White House Easter Egg Roll on South Lawn since 2009, yoga has come a long way in linking the ancient wisdom of the East to the contemporary needs of the West.

In India, there are possible policy decisions that clearly point out that yoga is not just to be celebrated on one day of the year as an event, but can and must be transformed into a movement. Introduction of yoga parks and possible executive education courses on yoga and meditation at the legendary Nalanda University, are some examples of how this is being achieved. 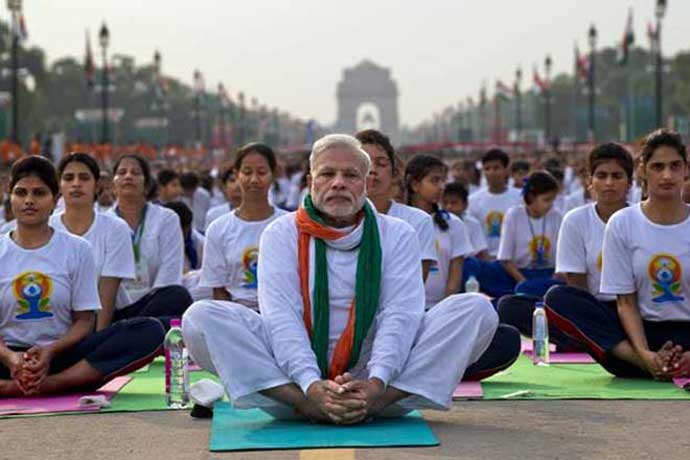 PM Modi called yoga the journey from 'I to We'. Photo: PTI

Having said that, since the inception of IDY, the gift has spread far and wide to several countries uniquely and superbly showcasing India's soft power. Even in countries where there was less participation and fanfare expected, like in Russia for instance, yoga has enthused a lot of excitement. In 2015, events to commemorate IDY were held at 244 venues in 80 cities in almost 60 regions of the country with close to 30,000 people participating. This liking for yoga however cannot be attributed to IDY alone. In fact there have been many organisations which have mushroomed in Russia that are taking yoga to the common man.

Russia has produced the likes of the legendary Indra Devi, also known as the first lady of yoga amongst her followers. She was responsible for teaching yoga in many countries, Argentina being one of them. In pursuit of embracing yoga, Indra Devi is said to have visited India and learnt yoga in Tamil Nadu from the Theosophical Society. She is also credited to have acted in Sher-e-Arab with the famous actor and film-maker Prithviraj Kapoor.

As per the Russian web portal, Russia Today, "1 in 3 Russians practise yoga today. According to some estimates, over 90 yoga studios in 70 Russian cities now offer yoga classes and workshops to all." The portal goes on to add that there are close to three hundred thousand people in the country practising various types of yoga. The Russian quest for understanding oneself through yoga and spirituality with an Indian lens is not a new phenomenon. PC: Agency

In 2008, Russian prime minister Dmitry Medvedev, then President, tried to popularise yoga. This is said to have contributed to several yoga centres and schools coming up in several regions of the country. Even Russian President Vladimir Putin once said that yoga "cannot fail to attract". Boris Yeltsin's wife, Naina Yeltsina, was known to practice yoga daily and encouraged all Russians to do the same.

The Russian quest for understanding oneself through yoga and spirituality with an Indian lens is not a new phenomenon. This can be traced back to the time when the Iron Curtain fell and spiritual thought began to be accessed. Indian spiritual giant Sri Aurobindo's literature began to find deep resonance amongst the minds of the people. Academics in Russia soon began to translate some of Sri Aurobindo's works for the benefit of those interested.

On the other hand, there have been several Russian philosophers who have persistently worked to bring Russia and India closer. One such name that resonates until this day is Nicholas Roerich, the painter and philosopher who spent his final days in the Kullu valley and who continues to be famously known for his Buddhist paintings which have been duly preserved.

Also read: Yoga is not as Hindu as it is believed to be. There's Muslim influence in it, too

Post your comment
#Spirituality, #Yoga, #Russia, #Vladimir Putin
The views and opinions expressed in this article are those of the authors and do not necessarily reflect the official policy or position of DailyO.in or the India Today Group. The writers are solely responsible for any claims arising out of the contents of this article.