Why I differ with Naseeruddin Shah

Making Bulandshahr about ‘intolerance’ only broad-brushes a great number of people as driven by ‘hate’. The truth is different.

Veteran National Award-winning actor Naseeruddin Shah has three children. His eldest daughter, an accomplished theatre artist, is reportedly in her forties, his son is 38 while the youngest is 28. They are all adults, doing well in life and they must have an opinion of their own.

Yet, Naseeruddin Shah chose to speak on behalf of his children and declared that they follow no religion.

He then went on to create an imaginary situation, where a mob surrounds his children and demands to know, ‘Which religion do you belong to? Are you a Hindu or Muslim?’ Then, as he narrated the story, ‘His children will have no answer’. Naseeruddin Shah said that he is thus worried about what might happen to them after they give out that answer. To my mind, this imaginary scenario is straight out of a typical 'communal riot' scene in a Bollywood movie, where the victim may be harmed by the mob or miraculously let off, depending on the religion of the mob itself. But make no mistake, this is an imaginary scene of a communal riot between Hindus and Muslims.

His grown-up children haven’t made any such statements ever. They have neither professed anywhere that they have stopped following the religion of Islam, which they were born into. Yet, that didn’t seem to stop Naseeruddin Shah from putting all of them in an imaginary situation where they are surrounded by a murderous mob.

Would you call this responsible behavior?

If the above is not enough, recently, Naseeruddin Shah has been making statement after statement that has attracted fairly serious media attention. His first controversial remark was that Indian cricket captain Virat Kohli was unruly and badly behaved. Naseer made his thoughts on Virat Kohli clear. (Photos: Twitter)

Considering the fact that nobody considers Naseer sahab an expert on cricket, the comment caused some stir, but didn’t cut much serious ice.

Just a few days later though, Naseer came out with his most controversial statement, where he said that the death of a cow in India is ‘given more significance than the death of a police officer’, while referring to the recent Bulandshahr violence in Uttar Pradesh where a police officer was shot by an angry mob protesting against cow smuggling.

That was the statement that really brought him full-blown media attention. As many right-wing outfits protested against the remark, Naseeruddin Shah stuck to his stand. No issues there — but before the controversy could die a natural death, he stoked the fire all over again.

He next came out before the press to defend his words and informed all that he is being labeled as a traitor. He then went on to ask his friends in the media how any concern for the country makes him ‘a traitor’?

All those words were uttered while he was about to attend a literature festival in Ajmer, which the press had already been invited to cover. Thanks to Naseer’s remarks, the whole focus shifted to him, with the protests gaining larger ground. As anticipated, Naseer’s appearance at the event was cancelled because members from a political outfit decided to stage a sit-in protest. One of the allegations that the protestors levelled was that Naseer was trying to stoke communal violence by asking people “to be angry", instead of getting scared.

As scores of articles now appear in the Indian news eco-system about how we should listen to Naseeruddin Shah and believe in him, I have a few questions for Naseer too.

Is it remotely true that violence is accepted by any recognised political party as a tool for protest? Is it true that only members of one community engage in violence? Is asking people to ‘get angry’ the right way to go about this? Does it suit a celebrity like him to speak about peace, or end up stoking anger against a section of people?

In addition, I think it's important to be fully aware. Cow-related violence in UP is not only about religion, it has grown far deeper than that. Cow-related violence in India has many aspects, a crucial one being cow-smuggling, which has continued unabated despite the affected people petitioning, protesting and reaching out to everybody in power for years now.

It needs to also be remembered that the cow is worshipped in many parts of India as God and regarded as a mother figure. But despite such deep religious sentiments and financial losses due to the kidnapping of cattle, criminals have formed beef mafia syndicates which have grown extremely powerful in the last few years.

The administrations in UP and other states are struggling to deal with the problem. Meanwhile, locals have taken it upon themselves to protect their cattle. You are free to choose to laugh at these people for being so touchy about a cow but the truth is, it is a matter of both deep faith and economic wellbeing for them.

Locals in several areas are now frustrated that nobody is apparently paying real heed to their socio-economic and religious problems. As a result, mobsters are taking over the narrative and trying to offer a counter-narrative, often of abhorrent violence, of ‘protection’. Often, frustrated and frightened affected communities have responded. 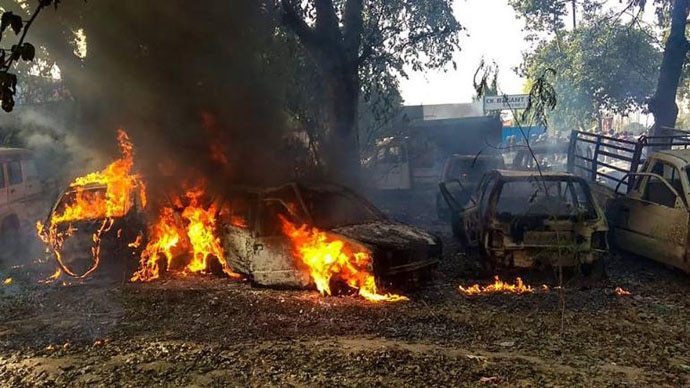 This was the work of a mafia mocking failing law and order. (Photo: PTI)

This is the way mafia syndicates are born everywhere. This phenomenon cannot be described as ‘intolerance’ or a large section of the population cannot be labelled a riotous mob. Instead, it is a failure of the law and order system that has left a vacuum for these mafia syndicates to raise their ugly heads.

It is impossible that a learned man like Naseeruddin Shah is not aware of the problem. Yet, instead of spreading understanding, he apparently wants people to be ‘angry’ about it. Rather than pleading with the police administration to put a stop to the illegal kidnapping and smuggling of cattle, Naseeruddin Shah links this to a political party and posts a video message where he says that the ‘poison has spread’ and it will be difficult to contain it.

My respectful submission here is this — the common people are not poisonous, Naseer sahab. They are suffering and they need redress. They too want to leave in peace, like you, like me.

In my opinion, this entire episode is not actually about intolerance, cow smuggling or violence even. Those are just similes that explain an underlying theme. That is political and apparently tries to tell people what they ‘should do’ in the upcoming general elections supposed to take place less than six months from now.

Prominent members of Indian society had raised the debate over intolerance previously as well. They returned state awards and pointed out violence perpetrated by only one party in the country. The result was quite unexpected. The BJP came to power with a thumping majority across the country. The impact of such an elite discourse was thus not the expected one.

Dear Naseer sahab, you are one of our country’s most respected artists. My request is that when we speak about the common people of our nation, let us not assume that all are idiots and blindly following a mandate of hatred handed down by a political party.

It doesn’t work like that, Naseer sahab — you, with decades of knowledge, should know that better than most of us.

Also read: We must heed Naseeruddin Shah: Don't be scared. Be angry!

#BJP, #Intolerance, #Bulandshahr, #Naseeruddin Shah
The views and opinions expressed in this article are those of the authors and do not necessarily reflect the official policy or position of DailyO.in or the India Today Group. The writers are solely responsible for any claims arising out of the contents of this article.