Okay, first things first. I am a political neutral. I am not anti-BJP, not pro-Congress and everything else that seems to divide the country these days. I stay away from political commentary, keep my views to myself and more often than not, keep my mouth shut.

But hey, who does not enjoy a nice political battle playing out on TV.

And there was plenty of it today, wasn't there? Something about a No Confidence motion in Parliament. The Modi government of course enjoys majority in the 545-member lower house of Parliament - but the opposition was hoping to score some brownie points by raking up poor growth and the spiralling law and order situation in the country.

Anyway, that's for the heavyweight experts to pour over.

There's more to this whole story, isn't there? No matter which side of the fence you sit on, how could you not enjoy Rahul Gandhi's speech? He stared directly at the Prime Minister and said "You may call me Pappu, but I don't hate you." What's not to like about that line? 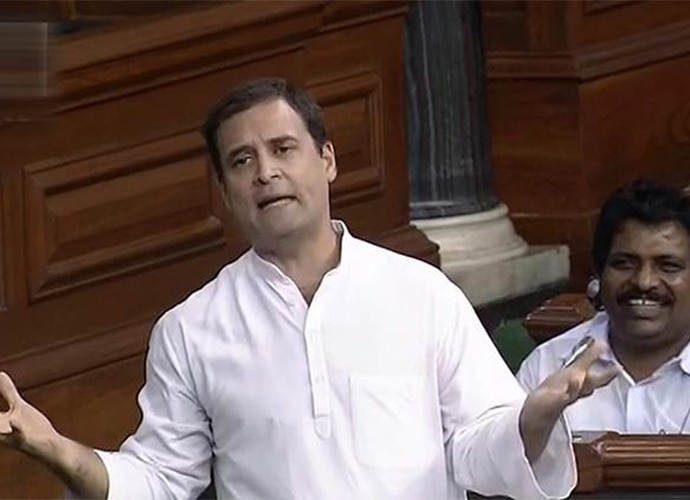 Rahul Gandhi's moment on the floor is a moment worth remembering! (Photo: Screengrab)

They have targeted him a fair bit. Basically, the government and its allies want you to believe the Gandhi scion has no political sense, that he is no good. And the Congress is having none of that. RaGa is their leader, inspirer and motivator.

Moving on, I am told this was Rahul's sharpest attack on the Prime Minister yet. He did not stutter, he did not give us any meme-worthy moments while he spokeand he even managed to annoy the government with his exuberance.

And to cap it all, Rahul walked up to Modi and, believe it or not, hugged the man. With the whole country watching. The Lok Sabha was stunned. I sure as hell was. The Speaker even managed a smile before mildly admonishing Rahul for pulling that stunt off.

What, but! That was cool, no? Modi, after all, loves hugging 'em too, does he not? But boyo, the Prime Minister was sitting in his chair and there are some rules. RaGa went and broke those rules. Damn! Maybe it wasn't bad enough to merit a punishment though.

But the best was yet to come. Rahul, the butt of several jokes (admittedly, I’ve rolled on the floor, laughing at a few meself), looks at a mate and winks! That wink, it got me. That wink has got to go down as one of the hippest TV moments in Indian politics in recent times.

Rahul Gandhi, butt of jokes, hot topics of memes, goes and hugs the Prime Minister, apparently breaks a rule or two in the house, then sits back down and winks as if to say - how was that for drama, eh? That wink was plain cool. Like a naughty junior school anarchist who had gone and challenged the big cat and walked off without a scratch.

Post your comment
#Lok Sabha, #Narendra Modi, #Rahul Gandhi, #No-confidence motion
The views and opinions expressed in this article are those of the authors and do not necessarily reflect the official policy or position of DailyO.in or the India Today Group. The writers are solely responsible for any claims arising out of the contents of this article.