On 69th Republic Day, why this village in Rajasthan is still waiting for a road

Just 3km from civilisation, this place is still living in a dark age.

"Can you help me get behind bars?" cried a voice from some distance as I was trying to click a picture of three men walking towards me.

As they came closer, I asked the man, who had yelled the question, why he had such a dreadful wish.

"At least I would get two square meals a day, a shelter and make some money for relatively less hardship," Gyaan Singh Gurjar, who appeared to be in his 60s, said, showing a bagful of sugar and groundnuts that he had fetched from Karauli town in Rajasthan.

What could be harsher than living behind bars? If this is what you are thinking, you need to visit Guler Ghat, a small village of around 200 households barely 3km from the collector's office in Karauli.

I had a chance visit to this place. As I was checking out of my hotel in Karauli, I had asked the help, Mahesh Saini, a resident of Guler Ghat: “What development has taken place in your locality?"

His answer was: "We don’t have roads.” 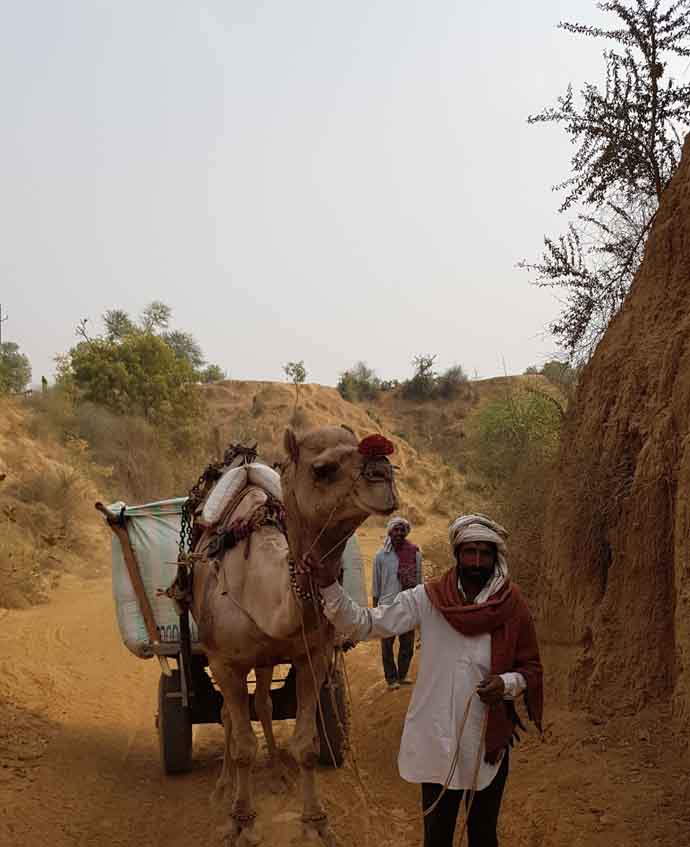 "Are they broken? Since when?" I asked.

Taken by surprise, I asked him if he could take me there. It's quite a task to reach this place, you need to walk your way through treacherous sand dunes to be there.

There is no road to this village, no water supply, mud houses pop up in clusters of four or five, and barely 18 months ago, electricity finally came to this village situated on the bank of river Bankheda. As I sat down to listen to them, almost the entire village had gathered. "It's not often that someone from the city comes here," said Mahesh.

The last "outsiders" to visit were officials who painted the walls marking these people as below poverty line (BPL).

No local administrator or journalist has come here in the past two decades, claimed the residents. The last politician to visit was Congress MLA Darshan Singh Gurjar, that too during election campaign four years ago.

"At times, I ask myself what did we do to remain so cut off from the world. Why nobody cares? We don't exist for the politicians and the administration. Our names are not in any welfare scheme list. They exist only in the voters' list," Mahesh said in despair.

"This time we will ensure no one from our village casts their vote. Why should we vote when this is how we have been languishing?"

Mahesh is not alone, almost the entire village feels the same.

And they have a reason, and my words can't describe the plight I saw around me. I could spot just one child in full clothes. And in absence of toilets, women in groups go to the nearby forests.

Bhajan Lal, the village head, said, "Before I die, my last wish is to see a road connecting the village."

Their children can't walk to school as the mud on most days is calf-deep, the nearest hospital is 4km away. When the river flowing by floods, cattle and humans take shelter together in makeshift stone structures built over the past few years.

Just 3km from civilisation, this place is still living in a dark age, notwithstanding the latest trace of development - electricity.

This "miracle" too happened after a reporter covered their "agitation" at the collector's office, and as a result, the SDM was asked to go and see the place. His car got stuck in the mud almost 1,500 metres from the village and he abandoned his journey, but assured that electricity would reach them. It did after a few months.

They were telling me all this in the hope that someone might read this piece and they would get another visitor from the government who will finally sanction a road or at least allot money for toilets or homes without taking a bribe.

On the long march back to civilisation, I met Angoori Saini, the lone girl from Guler Ghat to go to a senior secondary school. This braveheart walks almost 4km to reach her school. She told me she wants to be a teacher. Apart from her, there is one boy who is doing his second-year BA.

Wondering why no one took notice of this village, I reached the collector’s office. When asked, government officials responded without even looking at me. “The data that we use for reference would have missed this village.”

I went and talked to a few officials at the PWD department. Four out of five people weren't even aware of the place. When I told them that this place comes under Ward 2 of Nagar Parishad, they heaved a collective sigh. "PWD can't make roads there. It's out of our jurisdiction." The buck is passed.

Fearing similar fate, I entered collector Abhimanyu Singh's chamber. The young officer, who has been posted merely seven months ago in the district, appeared to be pragmatic. He acknowledged the problem and explained that it’s a tribal terrain with very small settlements of 30 to 40 people. "If the administration misses them, even people from other tribes don't bring this to our notice." He then dialled the department concerned and sought a report.

As I thanked him and got up to leave, he said, “Ask Mukesh to come and see me. I would like to visit this place personally.”

I just hope he does.

#BPL, #Guler Ghat, #Rajasthan, #Republic Day
The views and opinions expressed in this article are those of the authors and do not necessarily reflect the official policy or position of DailyO.in or the India Today Group. The writers are solely responsible for any claims arising out of the contents of this article.