Sometimes, you feel strong love and respect for people who are farther away than acquaintances. My relationship with Ankit was such where I felt deep admiration and closeness for someone I barely knew.

It must have been three or four times that I had shifted from one side of my chair to the other. The small auditorium on the ground floor of Ambedkar International Centre, in Delhi's Windsor Place, was slowly filling up. I do not remember what I was looking at for my gaze was mostly vacant — open, but not registering anything — as I waited for the event to start.

My mind was trying to recollect the first time I saw him — the spark in his eyes, the smile on his face, the childlike wonder in his expressions, the depth of thought in what he said, and the overall persona that would attract anyone towards him. He was no superstar — and yet, he was one in his own right.

I do not exactly remember what time of the year it was. I do not even remember the year. Perhaps it was 2015, maybe 2014. It was a hot evening in Delhi. The sun was no longer overhead but its long slanting rays were powerful enough to force tiny droplets of sweat on my forehead.

I suddenly remembered that I had posted about that event on Facebook. A quick search revealed that it was March 24, 2015, Ramjas College, North Campus, Delhi University.

The history department was organising its annual fest. A friend invited me in. The evening promised a performance by the legendary Tom Alter on Sahir Ludhianvi and a Dastangoi (a form of oral Urdu storytelling) by Ankit Chadha and Himanshu Bajpai, titled Dastaan-e-Aawargi, on the renowned Urdu poet, Majaz Lakhnawi. 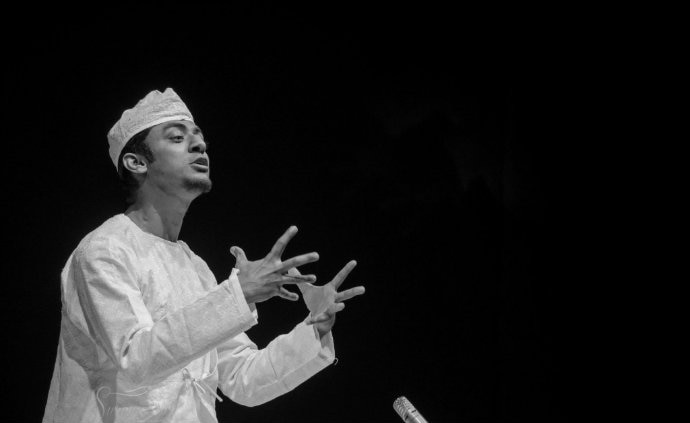 A source of light. (Source: Facebook/AnkitChadha)

Ankit Chadha. Yes, that's his name. The bright, exciting and confident 28-year-old that I was thinking about, sitting in my seat.

March 24, 2015, was the first and last time I saw him in person. I wanted to interact, chat and laugh with him. But the evening was a busy one, and I was too hesitant to approach him. We had common friends, but we never met again, neither did we ever interact on Facebook. He performed many a time in Delhi, but one thing or another kept me away from his performances. But I kept track, following his videos on Facebook and YouTube, and reading about him in the press.

You may say we were less than acquaintances. But sometimes in life, you feel a stronger emotion of care, love and respect for people who are less than acquaintances, than those you are friends with. My relation with Ankit was such. It was one-sided — and this made it more exuberant. I have little understanding of the Urdu language or its mannerisms, but when Ankit performed, watching him was a thrill. I didn't understand many of the words he used, neither did I ever bother to find out what they meant. Somehow, I could always connect with what he was saying — such was his grasp on the art of storytelling.

Creating drama, tension, suspense, surprise, voice modulation, gestures, satire, silence, stress, you name it — his performance had it all.

I do not claim to have the ability to see and study stage performances and storytelling with the critical eyes of a veteran or an academic, but, for me, Ankit was perfect in all spheres.

I saw him perform with my untrained eyes. I am happy that this gaze was not clouded with preconceptions of any nature. Neither were there any expectations, for I was, and still largely am, alien to his world.

But whatever little I saw of him, it was beautiful.

My train of thought suddenly brings me back to the Ambedkar International Centre. The little hall is almost filled to capacity. There is a small stage in front. On the right side is a large portrait of Ankit — a garlanded one. My eyes are fixed on it. It was his birthday a day ago (December 21).

In the portrait, Ankit is smiling. The twinkle in his eyes melts me. A faint smile escapes his lips and adorns his cheeks with a brush of laughter. There are small candles lit in front of his portrait. Their flames are dangling, reminding me of Ankit and the way he would move his hands in the air to make gestures and enthrall his audience.

I am here to attend a book launch. It's a collection of 16 dastaans (stories) that Ankit had written and performed in his short but very exciting life. In a way, this collection, To Haajireen Hua Yun, is a microcosm of Ankit's versatility. From dastans on Gandhi, Kabir, Dara Shikoh and Khusrao to giving a witty touch to address social issues like hunger, technology and sustainability, he spanned them all.

Four days ago, I was surprised to receive an unexpected message. It was a direct message on Twitter from Ankit's elder brother, Divay. He had sent me a personal invitation to attend the book launch. It wasn't supposed to be a big commercial event, but a small gathering of 'select people,' who, in Divay's words, were 'closest to Ankit'.

I was super excited — and, at the same time, extremely surprised to receive Divay's message. We have never interacted, neither have I written about my love and admiration for Ankit and his work. I do not know how or why Divay chose to invite me.

It clearly wasn't because I am a journalist, and he was looking for media coverage, for not once did he mention coverage. All he said was that it would be great if I came. He specifically requested that I should not circulate the invite as it was meant to be a close-knit event. 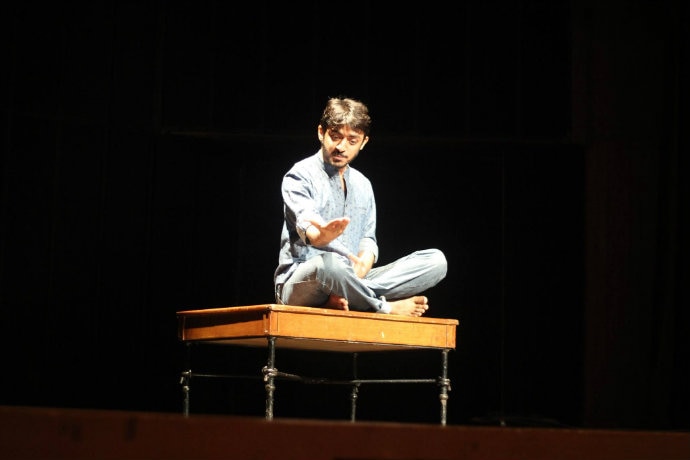 A mesmerising performer, Ankit had enthralled audiences in many parts of the world. (Source: Facebook/AnkitChadha)

It was a normal day at work. I was in my office in Noida, editing news reports. In came my colleague, Dev, also the shift in-charge for the day. He asked me if I could write a report on priority. "Of course," I said, "What is the subject?"

He said something about a guy named Ankit Chadha, who was into storytelling, and he had reportedly died in an accident in Pune.

"Please get in touch with our reporter there and take inputs to write a report."

I asked the name again. "Ankit Chadha," he said.

I asked him if he was sure. He said he was.

How do you respond to a piece of news like that? That someone you love and respect has passed away at the prime age of 31? How do you respond when it is you who has to write a report on his death? Dig up the internet, call the local reporter to repeatedly ask questions about the circumstances of his death? Give a headline — 'Renowned storyteller Ankit Chadha dies in an accident'?

A stream of tears flowed down my face as I started typing. My throat was choked. I don't know how I maintained my calm. I was working but I was shell-shocked. My hands shook as I typed. The task became even more difficult as I also had to incorporate reactions and condolences for Ankit, written by his friends and fans on social media. Reading them was painful. Every message further weakened me. So, I didn't go beyond the first few, finished the report and published it.

The task was completed — but there was a void in me. I had lost something. Someone. Days later, I met the friend who had introduced me to Ankit and his work that evening in March, in Ramjas College. She too was shocked by Ankit's death. Ankit and she had apparently planned to meet for lunch when he was likely to be in Delhi a week or two later. I am sure my request to join would not have been turned down by either of them.

But alas! That was not to be.

To comment on Ankit's art is not in my capability for I am too poorly read a person to opine on his work. But nuances aside, in just seven years, Ankit became the brightest star in the world of Dastangoi in India. He performed across the country and at Oxford, Harvard, Yale, New York and Toronto Universities, to name a few.

His performance of Daastan-e-Sedition with Himanshu Vajpayee at the Jawaharlal Nehru University, in the aftermath of the Kanhaiya Kumar controversy, will be remembered for the brilliance of his satire.

In an age where sermons fly thick and fast on what one should eat, wear, speak and look like, Ankit was a perfect ambassador of India’s composite culture. Brought up in a Punjabi household, he studied in Delhi, embraced Urdu, travelled through India, and dressed up (during performances) in a manner that some narrow-minded self-appointed custodians of Indian culture would say 'too Islamic.' His concerns for the marginalised, the poor and powerless would often reflect in his daastans.

Before his unfortunate death in May, Ankit had won the Sabarmati Fellowship and spent some months in the Sabarmati Ashram, Ahmedabad, to study Gandhi and prepare a Dastaan on him. Ankit was a perfect symbol of India's composite and creative genius. (Source: Facebook/AnkitChadha)

That was his last daastan.

It was called 'Prathna' — a musical daastan on death in the life and thought of MK Gandhi.

Days before his passing in Pune, he performed 'Prathna' in Bengaluru. Fortunately, a friend of his had recorded a high-quality audio of his performance.

The moment the audio was played, and I heard Ankit speak again, it felt as if he was sitting next to me. I was once again drifting in my mind to that March evening at Ramjas College, Ankit starting his performance with his trademark style of saying 'Toh hajireen hua yun' (So friends, this is what happened).

As we listened to Ankit perform a part of the Prathna in the next 15-20 minutes, there was pin-drop silence and all eyes were glued on the stage, perhaps at the speaker through which Ankit was speaking to us.

His friend, comedian/actor Varun Grover summed it up in a video message played at the book launch: "Ankit had the unique charisma that those who had met him once or twice felt that they knew him very well. And those who met him very often thought that they have just started to understand him." A star beyond many others. (Source: Facebook/AnkitChadha)

Varun is right. In life, there are a few people you come across who touch you in ways you know little of — despite being strangers, whose existence and memories give strength to you.

Typing this article and reflecting on the memories, I feel, for me, Ankit was like the white sublime Himalayas, whose presence gives life and meaning to beings who are alien to its presence, to those who have never touched it, and yet are married to it in a beautiful embrace.

Also read: We must heed Naseeruddin Shah: Don't be scared. Be angry!

#Sedition, #Urdu storytelling, #Sahir Ludhianvi, #Dastaan-e-aawargi
The views and opinions expressed in this article are those of the authors and do not necessarily reflect the official policy or position of DailyO.in or the India Today Group. The writers are solely responsible for any claims arising out of the contents of this article.