Trolls, wash your minds with the detergent whose ad you're needlessly slamming!

In attacking an ad that showed a beautiful message of friendship and peace, bigoted trolls did not realise that they unintentionally helped spread the same message too!

India is fast becoming an intolerant country when it comes to religion. We want to drag religion and personal beliefs into all our conversations and debates — and then create a hue and cry over it.

Whether it is outrage over consuming beef, or inter-religious marriages, or communal riots, as a society, we are showing little restraint in our public discourse that has now been magnified due to large-scale use of social media. As a country, we seem to have taken our freedom of speech a bit too seriously — with scant regard for our fundamental duties. No, the detergent ad doesn't promote anything beyond religious harmony. (Photo: Screenshot)

The latest to be added to the Twitter troll list is a new detergent advisement. The ad that runs with a tagline 'Rang Laaye Sang' (Colours bring togetherness) has been shot in the backdrop of Holi. It shows two kids, a Hindu girl and a Muslim boy, as the protagonists with many other children splashing the colours of Holi all around.

The young girl chooses to get drenched in the Holi hues till the other kids exhaust their stock of colours — and she does so to protect her Muslim friend, who has to visit a nearby mosque.

It is such a beautiful ad, promoting nothing but Hindu-Muslim harmony, and expresses a sense of freedom — a liberation from the shackles of stubborn religious beliefs and mindless religious orthodoxy.

But how could the fanatics keep mum?

They had to voice their stupid ideas to slam and mock the ad and bring out 'facts' the ad never intended to portray. Some hardliners trolled the ad with the #BoycottSurfExcel. Released on February 27, the video has already gathered over 7,740,000 views on YouTube. But the so-called bhakts refuse to stop. Some say it promotes ‘love jihad’; some say it hurts Hindu sentiments and there are more who ask, “So, now offering namaz has become more important than Holi?”

I mean, seriously! Who decided that this is what the ad wanted to portray?

Will the fanatics now decide if any ad should feature a young boy and girl together or not or whether it 'humiliates' Hinduism or not?

Some on social media said the ad insults the Muslim boy. “Why are you insulting a Muslim girl? Why would a Muslim boy need a Hindu girl's help to go the mosque,” are among the questions being asked online.

However, as funny, or as frustrating, as it all may sound, the trolls did not realise that they unintentionally helped spread the message of peace too.

Some politicians and actors have liked the ad and praised it for spreading a crucial social message. People's Democratic Party (PDP) chief Mehbooba Mufti tweeted:

To the Bhakts. You have no idea how much Surf your outrage helped sell....congrats 🙂 You're practically the new brand ambassadors.

The message of the advertisement is clear: “Apnepan ke rang se auron ko rangne main daag lag jaaye, toh daag acche hain..." (If you get stained while trying to imbue on others the colours of togetherness, then the stains on you are good).

Why should a message as beautiful as this be attributed undertones of a religious bias?

Holi is simply a festival of colours and that's it. Celebrate with everyone and enjoy.

Does Hindutva now mean that you cannot help a Muslim friend?

Unfortunately, the hardliners and trolls have such stained minds, they think boycotting a certain brand or ad will help them save their religion.

What about humanity, communal harmony and other such noble ideas? 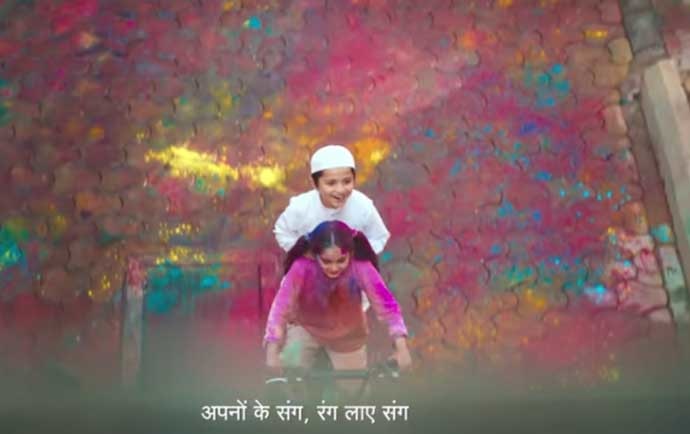 The kids are innocent. Let them remain so. (Photo: Screenshot)

These words don't seem to have relevance today. As a society, we are busy brandishing our orthodox religious beliefs. We blow the bugle of religion — but we miss out on the innocent smile that the kids wear on their faces in this ad.

They believe in equality. They do not understand Hindu, Muslim, Sikh, Christian, our temples, mosques, churches or gurdwaras. They are just kids who believe in freedom and believe in helping a friend. They believe in spreading joy and cheer irrespective of religious divides.

Why can't we adults be like them and simply think about being an Indian and being one community? Our differences should not be so huge that we are ready to rip each other apart at the drop of a hat.

I totally understand religion and beliefs — but these cannot be above humanity and people.

#Religion, #Communalism, #Trolls, #Surf excel advertisement
The views and opinions expressed in this article are those of the authors and do not necessarily reflect the official policy or position of DailyO.in or the India Today Group. The writers are solely responsible for any claims arising out of the contents of this article.