India has to be careful that it doesn’t antagonise other foreign investors with such strong action against Amazon.

Amazon Canada has invited the wrath of Indian foreign minister Sushma Swaraj after a Twitter user brought to her attention that the global e-tailer was selling doormats with the Indian flag embossed on them. Swaraj has sought an unconditional apology from Amazon and asked it to withdraw the products, failing which none of its “officials” would be granted Indian visas, while the visas issued earlier would also be cancelled.

While Amazon has obliged and reportedly pulled the product, Swaraj’s threat to the company is a case of tilting at the windmills.

Amazon must tender unconditional apology. They must withdraw all products insulting our national flag immediately. /1

If this is not done forthwith, we will not grant Indian Visa to any Amazon official. We will also rescind the Visas issued earlier.

At the root of her overreaction lies a very paranoid and narrow understanding of nationalism. Firstly, it purports to reduce nationalism only to respecting symbols. Secondly, does a nation of 1.25 billion people seriously need to be concerned about what doormats a distant country uses or exhibits?

The same site has flags of various countries available as designs on doormats, but it’s only Indians who are enraged over the issue so far.

Why are we getting so worked up about it? Why have we become so insecure that even doormats can rub us the wrong way. When US citizens don't become any less patriotic by wearing underwear with American flags printed on them, why should our nationalism be in danger from a doormat?

Thirdly, we have no objections to the national anthem being played even before movies with adult content but are enraged over doormats with our flag on them.

Swaraj, being one of the most senior ministers in the Modi Cabinet, was expected to handle the matter more tactfully rather than playing to the gallery. 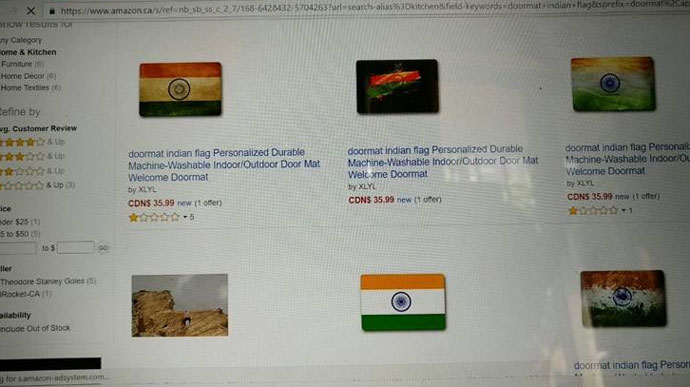 The same site has flags of various countries available as designs on doormats, but it’s only Indians who are enraged over the issue so far.

The minister's hurried intervention also raises questions over her priorities. At a time when the world is trying to adjust to a new US administration, Indo-China relations are hurtling downhill (with controversies regarding Indian-Vietnam missile deal, India's NSG membership, et al), India-Pakistan ties are at their nadir, Russia - India's closest ally - is moving closer to China and Pakistan, and Nepal is embracing China, should threatening an MNC to remove doormats from its website be the focus of the country’s foreign minister?

Did the matter indeed require/deserve her personal intervention? Would it not have been more appropriate for Swaraj to let her junior officials deal with the issue without blowing it out of proportion?

India has earned a lot of global goodwill with its inclusive and liberal democracy. But with this sort of posturing and one-upmanship against a reputed global giant, India is bound to appear as an insecure republic that has got its priorities wrong. It won't escape notice of other nations that while they had no objection to their nation's flag being printed on doormats and sold, the Indian foreign minister made a hue and cry over it.

This is also not the kind of message India should be sending out to investors. The incident may not just affect our global image of a tolerant nation, but also hit foreign investment. India has to be careful that it doesn’t antagonise other foreign companies with such strong reactions against one of its largest investors by threatening to disrupt Amazon’s operations. Such (over)reaction creates a perception of heightened business risks and reduced freedom.

Also, on what basis does she expect Indian national symbols to be compulsorily respected on foreign soil? If the doormats are being sold in Canada, would it not apply Canadian, and not Indian laws?

Does the Canadian law forbid flag-printed doormats? And even if it is illegal in Canada, would it not make more sense to rely on the legal recourse Canada takes in such cases?

Lastly, before publicly pulling up Amazon, the minister didn't provide the global e-tailer a chance to explain itself.

Swaraj with her action has perhaps just stroked a controversy which may only flag India as an attention seeker.

Post your comment
#Twitter, #Amazon, #Sushma Swaraj
The views and opinions expressed in this article are those of the authors and do not necessarily reflect the official policy or position of DailyO.in or the India Today Group. The writers are solely responsible for any claims arising out of the contents of this article.