It is easier to mock Modi, Mamata than take on media behemoths.

Finally I resigned from The Telegraph, albeit under duress like the 700-odd fired journalists and non-journalists in the ABP Group. 20 journalists, including 17 district correspondents in TT Bengal reporting, have lost their jobs in this round. The ABP management did not allow me to write my resignation letter but got me signed on a one-line format that had no mention of the company’s current culling of its workforce.

Instead, it pretended that I left out of my free will. Neither had I received a written assurance on the details of the “special package” and statutory dues when I had to sign another format about payments. One of the editorial bosses countersigned the latter as I asked for a promissory note from the management.

My HR handler said that the company would not commit formally to an individual (even if the job contract was between the company and me as individual). No reason was offered. I had to insist for the photocopies of the two documents. The pressure on me to put in my resignation at the earliest was aimed at accomplishing the management’s mission by this month.

Although I would be released on March 1, my access to the office computer system was deactivated even before I tendered my resignation. It was meant to make me feel completely unwanted. Also, I was asked to surrender my entry swipe card.

The arm-twisting tactics were evident as I was told that the processing of my dues would not begin unless I complied with. I became an outsider effectively that day. Now I would have to call HR/accounts or editorial nodal men and meet them at the reception, if they want, to get my dues cleared. So now, I am at the mercy of the management to receive the fruits of its benevolence after serving the house for 20 plus years. 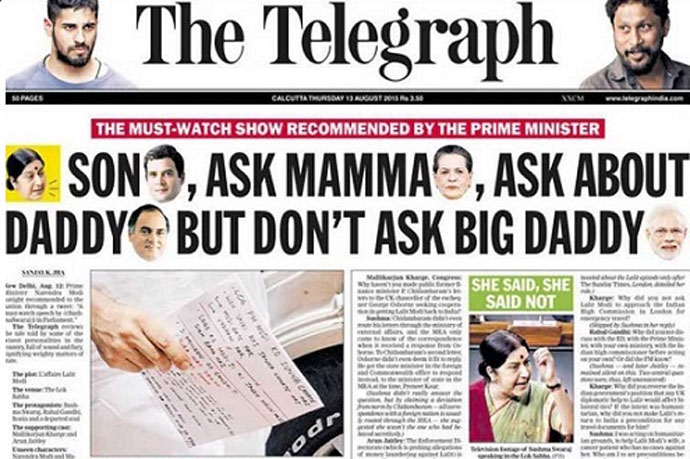 Perhaps it’s easy to defy Trump, Modi or Mamata than taking on the behemoths inside media empires.

I am told to trust the company which did not think twice before humiliating and firing 700 odd men and women in the name of financial crisis but never bothered to explain or discuss with the staff on ways to overcome it. It did not bother to offer us an honourable exit or an amicable separation, except a unilateral but informal assurance of a soothing package. Instead, a piece of paper handed over to the victims revealed the Orwellian absurdity of the world of ABP’s HR mandarins. It offered us help from career counsellors, psychiatrists and tax consultants except an audience with the top guns or some exchange of parting messages, not even corporate niceties like exit interviews.

Like Kafka’s Castle, we never reached the sanctum sanctorum of the media empire unless the presiding demigods wanted us to do so. Their high priests who are now manning the castle watchtowers are trying their best to behave like compassionate killers. But they may not know when and how the axe will fall on them.

Those in the newsroom who carried the defiant note by Columbia Journalism Review in the wake of America becoming Trumpland, or mocked Modi and Mamata for their megalomania, hardly showed the same courage of conviction when they were asked to change tunes from time and time as it suited the super bosses. If professionalism is the convenient euphemism for their meek submission, I expected them to protect the lambs they had shepherded so far, if not the perpetual prodigals like me. But sadly, that did not happen. Perhaps it’s easy to defy Trump, Modi or Mamata than taking on the behemoths inside media empires that goaded us to bask under the vainglory of independent journalism, only under their strict control.

The all-pervasive fear and deafening silence down the line is more alarming. I could not bid adieu digitally to my younger colleagues in reporting since my access to internal system was locked. I thought of taking leave of everybody in person. But the silence and indifference was chilling as none met my eyes. It was the girl at the reception who said: “Good bye sir”. There was some personal touch. And, I felt like crying. For the humiliation heaped on me at the fag end of my career, for the loneliness I suffered for my defiance, above all, for the shame of my inability to fight back.

The cowardice of my community leaders before the media owners is even more depressing. Despite the concerted attacks on journalists and non-journalists, on livelihoods across the country by the media barons, they are keeping mum.

“What can we do!” a Kolkata Press Club office-bearer who himself has suffered termination just before his retirement told me when I asked him to call a meeting covering all the affected houses. If his reply was typical of a man who had resigned to his fate and wanted to reap the benefits out of losses at the end of his career, the deafening silence of community elders and bodies in Kolkata and elsewhere will surely invite further onslaughts on young men and women in the profession in a short time. If the latter are behaving like proverbial ostriches at the time of sandstorm, it is the older jackasses with rubber spines who are to be blamed more.

Kolkata Press Club has managed to hold protest meetings and marches against ruling party or police attacks on journalists at different times despite the opposition and sabotage by the cronies of the rulers of the day, both at the state and Centre. But I don’t remember any protest meet, let alone a march, against the media Mughals in my 30 plus years in the profession.

Many watchdogs of democracy bark at the perceived or real intruders, often expecting pats from their masters. But unlike the real canines, they never bark at or bite the abusive and cruel masters. They are better at drowning their grief in the drinks after sundown while networking for change of masters. But the problem is that the masters are far and fewer now while our tribe has a baby boom. Pedigrees are rare and most of us are mongrels hardly having any taker. Mongrels are doomed if we follow the assorted asslickers who are relishing lairs of shit for good life, usually licking political and corporate masters by turn. My collar is rusted and my bones are weary. Hope someday some young canines will take up the barking, and, if needed, biting too.

#Journalism, #The Telegraph, #Indian media
The views and opinions expressed in this article are those of the authors and do not necessarily reflect the official policy or position of DailyO.in or the India Today Group. The writers are solely responsible for any claims arising out of the contents of this article.

The writer has spent 20 years with ABP Group. At the time of his retrenchment, he was serving as special correspondent, The Telegraph, Kolkata.