American spooks are using the Russian bogey the same way war hysteria against India was created.

Power politics in the US has become eerily similar to Pakistan as the US "deep state" appears unhappy with the 45th president Donald J Trump.

Intriguingly, American spooks are using the Russian bogey just like Pakistan has used the India bogey for more than half a century now.

Intelligence services in Pakistan have often treated elected leaders, for instance Bhutto father and daughter — Zulfikar Ali and Benazir — and present premier Nawaz Sharif, as less patriotic than themselves and in the same way American spooks are treating Trump as a security threat.

The US secret services are not only leaking information against Trump to the mainstream media, but are also withholding some key information from the president and his team for fear they will end up in adversarial hands.

President Trump is bitterly, and openly, complaining about the situation. Suspicions of "deep state" conspiracies got credence after Trump was forced to fire his ears and eyes in the administration, General Michael Flynn, on the 24th day of his job last week. Suspicions of "deep state" conspiracies got credence after Trump was forced to fire Michael Flynn.

Reports indicate the "deep state", which included former president Obama loyalists, conspired against Flynn, a former chief of the Defense Intelligence Agency (DIA). Flynn in 2014 debunked Obama's view of moderate and extremist ISIS and was sacked as the DIA chief.

An embattled “tweeting president” Trump through tweets — his favourite medium for reaching out to the US public — has lambasted the role of the sacred cows.

"The NSA & FBI... should not interfere in our politics,” cautioning it’s a "very serious situation for USA.” Noted American national security writer Eli Lake in an article in Bloomberg, writing on what he called Flynn’s “political assassination” said the ousted NSA “was working to reform the intelligence-industrial complex, something that threatened the bureaucratic prerogatives of his rivals". Trump profusely thanked Eli Lake even though his write-up was far from flattering for his new administration.

Trump is taking to Twitter to expose the "wrong-doers", annoying the spooks and their messengers, the US mainstream media, even further.

“The real scandal here is that classified information is illegally given out by "intelligence" like candy. Very un-American!” The president went to the extreme to castigate the mainstream media, which is being fed classified information by the intel services to embarass him, as “enemy of the American People".

He said, “Information is being illegally given to the failing @nytimes & @washingtonpost by the intelligence community (NSA and FBI?). Just like Russia.”

Trump tweeted, “The real story here is why are there so many illegal leaks coming out of Washington? Will these leaks be happening as I deal on N Korea etc?”

Even Trump’s diehard opponents admit the president is at war with the "deep state".

“But if it comes to it, prefer the deep state to the Trump state,” Kristol said.

But what exactly is the "deep state" and why is it against Trump?

Breitbart, a voice for American nationalists which was once published by Trump’s chief strategist Stephen Bannon — called "President Bannon" by the liberals as he is the chief ideologue of the present administration — describes the "deep state" as “the complex of bureaucrats, technocrats, and plutocrats that likes things just the way they are and wants to keep them like that — elections be damned".

Pulitzer-winning journalist Glenn Greenwald, in an interview with Democracy Now described the "deep state" in detail.

“The deep state, although there’s no precise or scientific definition, generally refers to the agencies in Washington that are permanent power factions. They stay and exercise power even as presidents who are elected come and go. They typically exercise their power in secret, in the dark, and so they’re barely subject to democratic accountability, if they’re subject to it at all.

It’s agencies like the CIA, the NSA and the other intelligence agencies, that are essentially designed to disseminate disinformation and deceit and propaganda…”

Greenwald in an article in The Intercept pointed out two former chiefs of the CIA, Michael Morell and Michael Hayden, openly called for backing Clinton during the election campaign. “Former acting CIA Director Michael Morell not only endorsed Clinton in The New York Times but claimed that “Mr Putin had recruited Mr Trump as an unwitting agent of the Russian Federation.” George W Bush’s CIA and NSA director, Gen Michael Hayden, pronounced Trump a “clear and present danger” to US national security and then, less than a week before the election, went to the Washington Post  to warn that “Donald Trump really does sound a lot like Vladimir Putin” and said Trump is “the useful fool, some naif, manipulated by Moscow, secretly held in contempt, but whose blind support is happily accepted and exploited.”

According to highly respected author and public intellectual Patrick J Buchanan the "deep state" in the US is “out to bring down president Trump and abort any move to effect the sort of rapprochement with Russia that Ronald Reagan achieved".

In a rare display of American honesty that has endeared him to the American masses, Trump in an interview with Bill O’Reilly said, “Well, you think our country is so innocent?” However, many Republican senators who have a holier than thou attitude cajoled Trump for saying America was not Mr Clean of the world. Senator John McCain, who has been a senator for three decades and has solid ties with the "deep state", are shaming Trump not only inside the US but also debunked Trump, without naming him, at a conference of Western leaders and security strategists in Munich last week.

In Pakistan ISI reportedly uses journalists like Mubashir Luqman to undermine elected leaders; Trump believes a concerted disinformation campaign has been launched by the “fake news media” against his administration.

“The FAKE NEWS media (failing @nytimes, @NBCNews, @ABC, @CBS, @CNN) is not my enemy, it is the enemy of the American People!” Trump tweeted last week.

In some ways, Trump maybe right as the prestigious media outlets are using tabloid style journalism against his administration. For instance, an explosive report about Trump’s team contacts with Russia headlined "Trump Campaign Aides Had Repeated Contacts With Russian Intelligence" in The New York Times does not mention any source in the story, only saying, “All of the current and former officials spoke on the condition of anonymity because the continuing investigation is classified.”

Two weeks ago, The New York Times in a report said, “Aides confer in the dark because they cannot figure out how to operate the light switches in the cabinet room.”

Just  a week before his inauguration Trump drew an analogy between the US intel and Nazi Germany after the CNN reported the CIA had briefed Trump and president Obama that Russians have compromising personal and financial information on him. 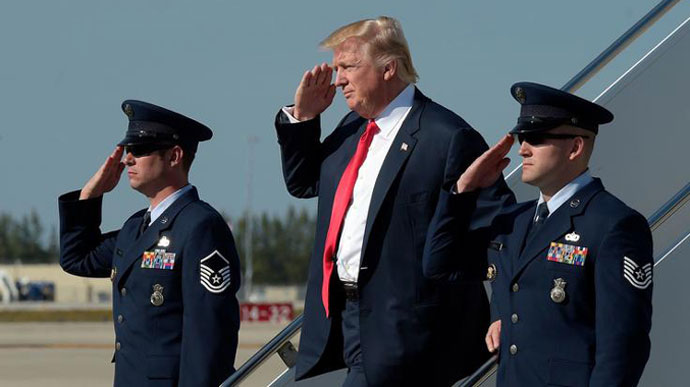 Trump tried to mend fences as he visited the CIA headquarters in Langley within 24 hours of his inauguration, without much success.

“Intelligence agencies should never have allowed this fake news to "leak" into the public. One last shot at me. Are we living in Nazi Germany?” Trump tweeted.

He did try to mend his fences as he visited the CIA headquarters in Langley within 24 hours of his inauguration, without much success.

Democrat Senator Chuck Schumer talking about Trump’s open differences with the intel community said on the popular Rachel Maddow Show, “Let me tell you, you take on the intelligence community, they have six ways from Sunday at getting back at you. So, even for a practical, supposedly, hard-nosed businessman, he’s being really dumb to do this.”

But others like former congressman Dennis Kucinich feel Schumer is barking at the wrong tree and say the US can’t let intelligence services undermine US democracy.

“We are witnessing an attempt by some shadowy intelligence operatives to destabilize America for ideology, money and power,” Kucinich, who ran in Democratic primaries for president of the United States in the 2004 and 2008 presidential elections writes in the Newsweek.

And just like Pakistan media builds up war hysteria against India at the behest of the "deep state", a report last week said a Russian spy ship was spotted just 30 miles off a US naval base at Groton, Connecticut. But Trump pooh-poohed the report at his marathon Press conference Thursday (February 16) to say, “I know politically [getting along with Russia] is not very good for me,” Trump said. “The greatest thing I could do is shoot that ship that’s 30 miles out on the shore out of the water. Everybody’s going to say ‘Oh, that’s so great’; that’s not great... I would love to get along with Russia.”

Trump favours an alliance with Russia to defeat radical Islam while the old boys and girls network in Washington DC seem to believe that Russia is no lesser threat than the ISIS.

According to the AlterNet, the ongoing war between the Trump presidency and the "deep state" is “the death match of American political power and it will determine the fate of Trump’s troubled presidency.”

However, there are signs that the Trump administration is giving in to the spooks pressure on Russia. White House spokesperson Sean Spicer, just two days after Flynn’s was sacked, demanded that Russia surrender the oil-rich Crimea to Ukraine.

Also read: These Tiny Trumps are too cute to be real

#Deep state, #US, #Donald Trump
The views and opinions expressed in this article are those of the authors and do not necessarily reflect the official policy or position of DailyO.in or the India Today Group. The writers are solely responsible for any claims arising out of the contents of this article.