The case has stirred a positive discussion, mainly galvanised by her strong stand.

"Guys, think rationally. A guy chases a girl - he's drunk! Deplorable. But why charge him with abduction etc without investigation."

This (by now, much-lambasted) tweet was posted by Union minister Babul Supriyo over the Varnika Kundu case. In another tweet, the minister — a former celebrity and currently people’s representative — urged the people to hear the stalker’s side to know “why he did what he did”.

One tweet also came from Shaina NC's account: A picture claiming that Kundu, the “victim beti” knew whom she claimed to be her stalkers - the mocking undertone reflected clearly in the choice of words. Shaina NC is the spokesperson of the ruling party, BJP, and a former fashion designer. She later claimed her account was hacked and this tweet was deleted.

A day before, BJP Haryana vice-president Ramveer Bhatti had asked why Kundu was out so late at night, a comment that draw flak from few of his own party members.

The urge of BJP leaders to defend the accused in this case may be a result of this connection, but we know how often this defence and victim-blaming sequence has played out.

Whose road is it, anyway?

It happened on the intervening night of August 4-5. 29-year old Varnika was on her way back home; it was the end of her day, her trip to the comforts of her home, when it turned into a nightmare. She was chased by two men for many kilometres on one of the posh stretches of Chandigarh. Kundu also claims they tried to open the door of her car. 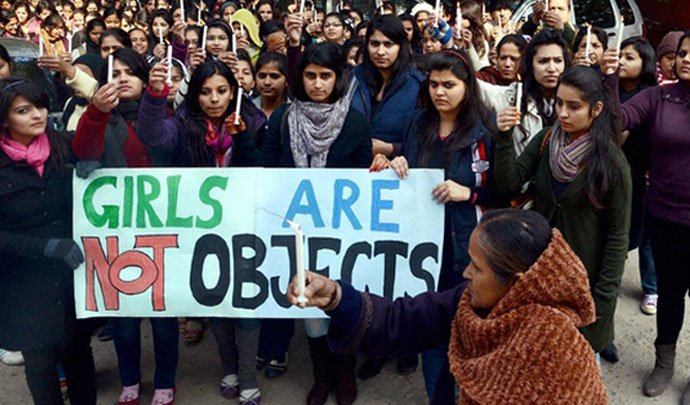 The nightmare ended only when the two stalkers were intercepted by the police whom Kundu had called for help.

Although much criticised, Bhatti’s reaction was quite predictable; in fact past incidents tell us it was only a matter of time before somebody pointed out the time when the girl was out on roads, and time and again they are reminded that it’s for their own "safety".

In this case Kundu, the stalked woman, is everything misogyny would be averse to: Clear, confident, and rightly unapologetic about her choices and the time she chooses to access the roads.

In terms of a woman going about her life being stalked, chased, harassed by a bunch of men, Varnika Kundu’s is a story with several reruns in different settings: on way to villages, schools, colleges, markets, practically everywhere; often in broad daylight, because that’s when women and girls mostly venture out.

Metros may be an exception, but for a large section of women across the country, their interactions with life beyond the periphery of their houses are mainly dictated by families and forced social norms. Social norms, that are skewed in favour of men to the extent that they’ve become anti-women.

In a widely used picture, Varnika Kundu is giving a wide, carefree smile with headphones around her neck. In another, she is seen with two friends, carefree. In public pictures on her Facebook profile, she comes across as a free-spirited, confident girl, staring at the sunny side of life.

Her father Virender Kundu, a senior IAS officer, rallied behind his daughter from day one. In a Facebook post he doesn’t only talk about his support, but more importantly upholds their right to choose the life they want.

His post reads: “I am proud of you, Varnika Kundu and Satvika Kundu and Sucheta Kundu. You have chosen to take on the worst form of chauvinism manifested in our society. My difficulties on account of this decision are nothing compared to yours. We will not let criminals or their stooges affect your value system, or the quality of the life you have chosen for your selves (sic).”

In a country with a male guardianship system this is not a norm.

In this case, voices of support for the right of a woman to demand justice for being chased on roads have risen from unlikely quarters, Haryana khaps for one.

One may argue that it is not a norm, that the Kundus’ social profile may be a reason for this support. But largely the case has stirred a positive discussion, mainly galvanised by her strong stand.

In days since this case came became talk of the town, at least two big stalking incidents have made headline: One a fashion designer being stalked by an IT professional in Mumbai. Two, a techie on her way home to Gurgaon by two men. Both of these cases happened quite late in the night with both the victims reporting the matter to the police rather than letting it go.

For long, the onus to not get harassed has been on women, now they are adamant to put it back where it belongs to - on the shoulders of erring men.

It may still be some time before girls can occupy public spaces as freely as their male counterparts, but the assertive new-age woman has made it clear that the “boys-will-be-boys” excuse has out lived its shelf life.

Also read: Chandigarh stalking case: When Mayawati was in ML Khattar’s shoes — and expelled her MLA

#BJP, #Abduction, #Chandigarh stalking, #Varnika Kundu
The views and opinions expressed in this article are those of the authors and do not necessarily reflect the official policy or position of DailyO.in or the India Today Group. The writers are solely responsible for any claims arising out of the contents of this article.