A Draupadi’s moment of mirth can still cause a whole kingdom to perish.

Laugh and the world laughs with you, cry and you cry alone. The adage is somewhat a mockery in these times or really a mockery of our times. Draupadi is supposed to have burst into raucous laughter upon seeing the very angry young heir to the Hastinapur throne trip into a pool of water body at her swanky new palace in Indraprastha.

That momentary lapse, despite the sage Vyasa’s advice, sowed the seeds of a public humiliation followed by a terrible war that wiped out the entire Kaurava clan. So, just when it looked like the gender war was going decisively in favour of the protagonists, a terrible adversity has befallen womankind — do not laugh aloud is the call of the House of the elders! This offends the king and will invite rebukes and reprimands from the loyal courtiers.

The menfolk in our land clearly are without grace and indeed without a sense of humour. A solitary ha ha moment need not take anything away from the gravity of the state of the Union message emanating from the high and mighty, unless the message itself is flawed. Flaws are always contested spaces among our argumentative countrymen, particularly where these are about our history. Of all the sad thoughts and words, saddest are, "it might have been". 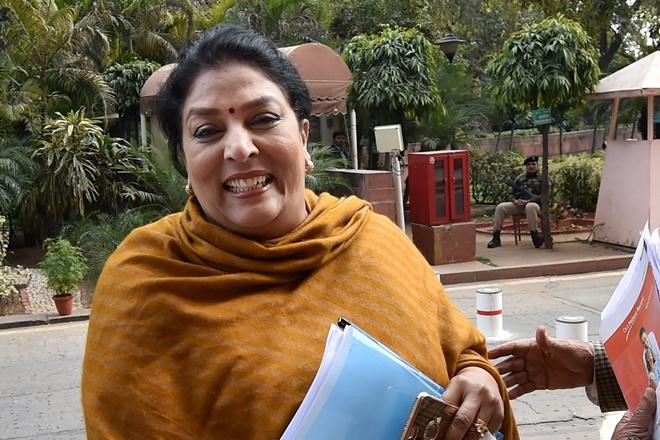 In the battle of sexes, women are the stronger of the two and men have always been afraid of their power. Photo: PTI

So if Patel would have made a better leader than Nehru, today will not change one bit. We inherit the good with the bad. We catch the baton of the previous relay and take it forward. That is the way the race will be run. No one can grab the winner’s baton unless the race is fixed. But this is about the verbal violence unleashed after the feminine cackle that ‘mocked’ the solemn and serious address to the nation. The faithful must retaliate.

Demonesses, in this land of sadhus and saints, have proliferated in the public spaces causing fear and fright even to the "Z plus” guarded rulers. As much as women drinking beer worries one worthy no end, the cackle of another infuriates the menfolk of the ruling majority and its followers.

The "Khaps", not to be left out, threatened that they will stop producing girls in case the judiciary insisted on enforcing foreign freedoms like the right to marry anyone of their heart’s desire. And these Khaps have to be taken seriously for they can do anything from mere ostracisation to mortal bodily harm. The state governments, as in the past, are likely to be mute spectators if not active supporters as these Khaps can mobilise a few thousand votes, for or against with one commandment to their herds.

In the battle of sexes, women are the stronger of the two and men have always been afraid of their power. Our mythology has numerous stories of their sway and destructive power, either with a smile or laughter as their weapons. Goddess Durga is destroyer of evil and slayed Mahishasura with a screeching laugh, and so is Ma Kali, the darker alter-ego of Durga, whose absolute wrath destroyed Raktabeej.

Our tradition also refers to women, as vessels of Shakti, and acknowledges women as having both creative and destructive power but power that is always used accompanied with a sound akin to derisive laughter that would instill fear in the hearts of the male enemy. Aristotle, too, felt that women’s voices were proof of their wickedness. The very sound of their voices, it was believed, could sink the state.

That belief of the ancient philosopher seems to be the cause of the trouble for the author of the laughter that infuriated the mighty of our land. Surely, this must rank as a psychosis of the male rulers, yet, "sanskari" codes have been spelt out over centuries. Violations are at the peril of death.

According to many, we live in a post-truth world and rhetoric is supreme, facts regardless. Incredulity needs to take other forms apart from derision. In this land of diversity, we are united by patriarchy in every form possible and always in evidence, from being allowed to be born to being allowed to live. The conspiracies of patriarchy are aplenty, but this one of deriding feminine laughter, albeit a mocking one, must be among the flimsiest in adding a false layer of the many glass ceilings that confines the gender to sub-uman levels.

Mankind, though, better beware. A Draupadi’s moment of mirth can still bring a whole kingdom to perish.

#Laughter, #Women, #Mahabharata, #Draupadi
The views and opinions expressed in this article are those of the authors and do not necessarily reflect the official policy or position of DailyO.in or the India Today Group. The writers are solely responsible for any claims arising out of the contents of this article.