Despite the high rate of accusations and arrests, the rate of actual conviction in wildlife crimes is abysmal — and alarming. It is emboldening poachers who are concerned only with their own profit, and not with our collective loss.

The recent news of 429 tigers and 102 rhinos being poached in the past decade (between 2008 and 2018) that was carried by several news organisations was based on the responses received for RTIs.

I am happy that the responses to the RTIs I had filed has achieved the intended aim of evoking a public reaction and sensitising the citizens towards the need of preserving the keynote species of our country — thereby pressuring the authorities concerned to bring in stricter laws and take immediate action against wildlife crimes.

Environmental causes and the adverse effect of human behaviour on the ecosystems has always been a concern for me, even as a school student.

However, today as a research scholar in environmental law, I now see it in a more objective light than I did back in school.

The present RTIs that have been in the news is a part of a series that aim at exploring the loss of keynote species to poaching and the low rate of the conviction of poachers. Starting with a count of tigers poached in the past decade, I also sought information on rhinos, elephants, snow leopards and the lion-tailed macaques as well. 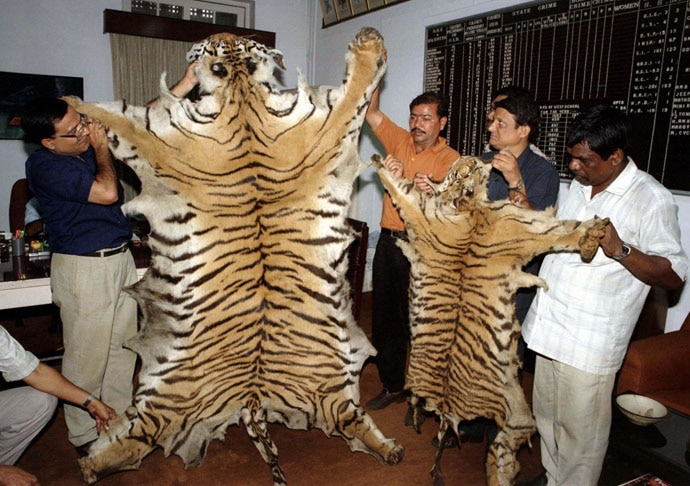 And this was once a real, living being: Officials displaying the seized skin of a poached Royal Bengal Tiger. (File photo: Reuters)

Based on the responses received from the Wildlife Crime Control Bureau (WCCB) under the Ministry of Environment, Forests and Climate Change (MoEFCC), I found that while they have a tally of the number of animals poached and also the alleged poachers arrested, there was no account of the cases reaching the logical conclusion.

The WCCB had no information on the conviction rate of these poachers.

This is disconcerting because unless there is a high conviction rate in poaching cases, the crime will continue unabated as the money involved in poaching is very high. It is important that the seriousness of conserving the species is seen by the authorities as they are an integral part of the food chain, both as predators and preys.

If even one of these species goes extinct, the whole food chain is bound to collapse — leading to catastrophic consequences. The one-horned rhino that was slaughtered at the Pobitora Wildlife Sanctuary in Assam. (File photo: Reuters)

Humans are not impervious to these changes in the wildlife world.

Sitting in Noida and experiencing the drastic changes in our weather patterns and the gas chamber conditions in winter we are currently living with, it was but natural for me to be involved in the cause that is affecting every single one of us in more ways than one. It is imperative that we take note of the way we are destroying the wild world — because if the government does not take cognisance of the obliteration of wildlife today, it does not leave one with much hope that crimes against humans will be given much precedence in the future either.

#Wildlife Protection Act, #Wildlife crime, #Poaching, #Wildlife conservation
The views and opinions expressed in this article are those of the authors and do not necessarily reflect the official policy or position of DailyO.in or the India Today Group. The writers are solely responsible for any claims arising out of the contents of this article.

A research scholar in environmental law, Ranjan writes on wildlife and social issues.