BJP has won repeatedly and consistently in Gujarat, despite a troubling agrarian scenario and a water crisis. What are the factors that propel the incumbent back to power in Gujarat each time?

The fact that Gujarat is one state where the BJP’s political grip is strong is not exactly news to us. A brief look at the history of Assembly elections in the state shows the BJP’s consistent winning streak. As of now, the BJP is leading on all 26 seats from Gujarat — that too, with a huge margin. And Amit Shah's margin of victory is said tobe historic in scale.

But, despite incumbency, what factors could have played a major role in the BJP’s Gujarat lead this time around?

For starters, we need to look at the water crisis and the agrarian crisis which are a harsh reality of the state of Gujarat. Since these issues have plagued the state for a long time, it was felt that voters may sway the other way round this time and bring the Congress to power. But the results remain in favour of the BJP. 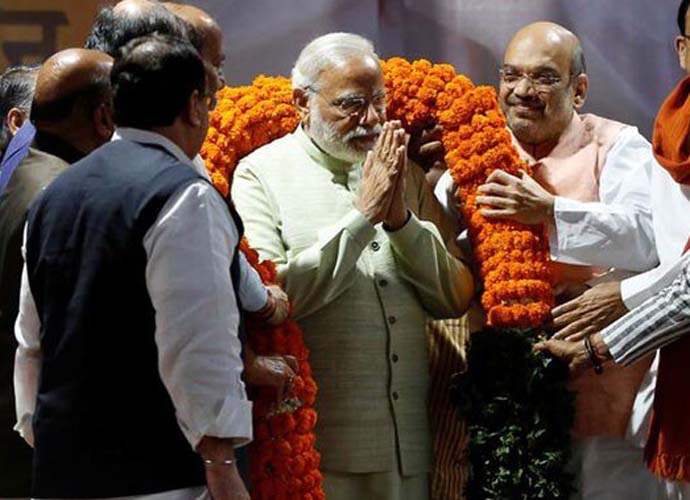 Pro-incumbency, TINA, national security: Some of the many reasons behind the BJP’s repeat victory in Gujarat. (Source: India Today)

That is where the TINA factor comes in. ‘There is no alternative’ (TINA) perhaps convinced the voters that the BJP is the only alternative they can choose from, the only alternative that can solve the water and agrarian crisis. It is interesting to note that the predictions of the exit poll were mostly correct with the BJP clearly expected to win 25+ seats.

Another factor that could have played a major role is that voters were predominantly pro-incumbency.

The voters, perhaps, preferred voting for the PM candidate who is from their own state and has been a popular and powerful Chief Minister for 12 years. Voting for the Congress in such a situation would have been a risk, almost a gamble of sorts, and tantamount to wasting one's vote. This is why the voters preferred bringing the BJP back to power. Also, it was the development done by the Modi government in the urban areas of the state that swayed voters in the BJP’s direction. What’s interesting to note is that Amit Shah contested Lok Sabha Elections for the first time — and is currently leading with a huge margin of 302600 seats. Shah's seat from Gandhinagar is particularly controversial because it was rumouredly taken away from LK Advani.

Another major factor that could have affected the results is the post-Pulwama events and the issue of national security. In a Lok Sabha election, it is quite reasonable that the voters would give preference to national security even over local issues and vote for the general well-being of the nation. All in all, the BJP’s victory in Gujarat is a result of several factors that played a collective role to bring the party back to power in the state.

Now that the Congress has lost in Gujarat, despite having the advantage of challenging incumbency, it will be interesting to see if and when the party comes to power in a state which is truly the hot-bed of all things BJP.

Also Read: Exit Polls 2019: Are Rahul Gandhi and the Congress trying a 'dismantling strategy'? This could hurt Indian democracy

Post your comment
#Gujarat modi election results, #2019 Lok Sabha elections, #Gujarat result, #Gujarat election result 2019 live
The views and opinions expressed in this article are those of the authors and do not necessarily reflect the official policy or position of DailyO.in or the India Today Group. The writers are solely responsible for any claims arising out of the contents of this article.