Where were the Chowkidaars? A Muslim family attacked in Gurgaon found they had none

The trigger to this was apparently a minor altercation on playing cricket in a nearby ground.

For a Muslim family in the Bhondsi area of Gurgaon, the festival of Holi turned into horror.

They had to face what no one should, in their own country — a mob entered their house and started thrashing them.  Men, women, age or gender, was no bar for the criminals. They also looted the house — and while all of this was happening, the goons in the mob constantly kept reminding them about their religion and asked them to ‘go and live in Pakistan’. The horrific attack was captured on camera by a desperate relative. (Photo: via India Today)

The trigger to this was apparently a minor altercation on playing cricket in a nearby ground. The graphic and brutal act was caught on camera. A video clip recorded by a desperate family member is out to be seen by the world.

A few things are very important to understand in this incident. The family faced this ordeal for a long time — the family battled it on their own. The police, as usual, came late, something we have gotten used to in most such cases. Nobody apparently in the neighbourhood came to their rescue — this begs the question as to what has happened to our values of being inclusive and protecting our neighbour? Have the seeds of hate been sown so deep that no one wants to side with the weak anymore?

Also, where does this mob get its strength from? Is there no fear of the law — or do these people know that somehow, they have impunity when it comes to such things? Where were the police? Or even, the fear of the law? (Photo: ANI)

While speaking to several news reporters, the family said they had never faced such an issue before and had no such animosity with anyone. They were mainly occupied in a gas repair business and were visibly shaken as to whether they could continue to do that in that area. It all leads to scaring them away from that place — exactly what the goons who attacked them were shouting about.

This isn’t the first such incident in which Muslims has been targeted. Just last year in Gurgaon itself, self-styled Hindutva groups had started disrupting Friday prayers (namaaz) on open plots by Muslims, terming it 'encroachment' when such a prayer was held only once in a week and in public spaces.

The incident on Holi comes a few days after the terrorist attack on two mosques in New Zealand — which left close to 50 people dead. The attack was carried out by a white supremacist who had hate filled in him against the community. While the incident was horrendous, the manner in which people in New Zealand reacted was an example for the rest of the world. The NZ Prime Minister, Jacinda Ardern, took the lead in showing empathy and calming the families of the victims. She has shown to the world how hate can be countered with compassion. Today, the world — including the Muslim community — sees her as a ray of hope against the disease of hatred. 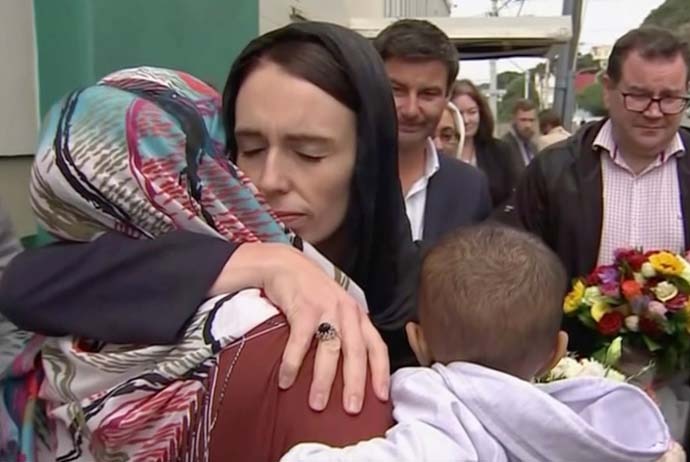 NZ Prime Minister Jacinda Ardern has been exemplary in reaching out to a deeply injured Muslim community. (Photo: AP)

New Zealand may be a small country — but it has shown the path to all of us. In India, we should follow the route. The people of this country should come out and show these goons, who use religion as a tool to intimidate others for their own petty purposes, that they have no place in society. When such elements will be isolated and shamed, this hate will be defeated.

This family in Gurgaon had no ‘Chowkidaars’ for themselves —- society itself has to become one for all such helpless people. The common person has the power to do it and thereby uphold the age-old values of this great nation.

Also Read: Christchurch terror attack: Why hate is the easiest emotion to embrace