Why being a woman in Kolkata scares me today: Caught between sexist slurs, syndicates and Jai Shri Ram

Why I am filled with dread in Bengal today. By a broken statue. A riot in the street. Packs of local criminals turned netajis. Will my freedom as a woman in West Bengal soon die?

From yesterday, my Facebook timeline has been flooded with images of a beheaded Vidyasagar statue rolling in the dust. This, even as the Chief Minister, Mamta Banerjee, prophetically holds Bengal to close to her heart — a state shamed as ‘kangal’ (pauper) in the morning newspapers with the headlines screaming of all the hooliganism. I was witness to it myself, en route to New Market — a popular market in the city of my birth — watching from afar as an enviable Rath Yatra slowly made inroads into a city that is being predicted to witness an impending saffron mandate, come May 23.

Where grown men, dressed as Hanumans, mingled with women bestowing marigold petals on BJP's Amit Shah, who was supposedly asked to cancel his parade by the Honourable Chief Minister.

Who failed to stop the rout. The rowdiness. The rot. 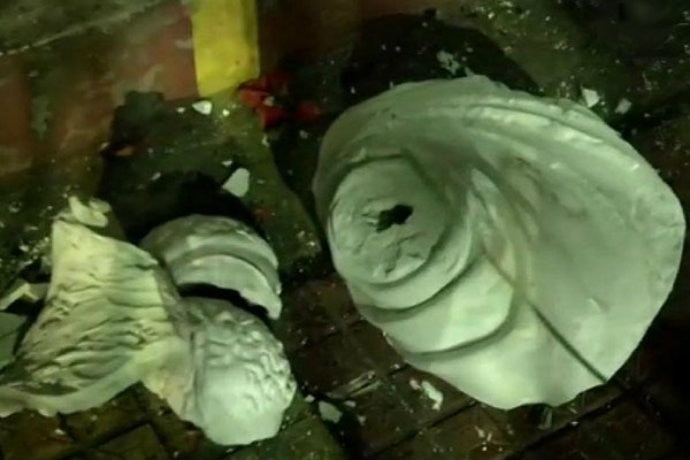 Smashed to bits: A famous bust of Bengali icon and reformer Ishwar Chandra Vidyasagar destroyed in the pell-mell. (Photo: ANI/Twitter)

That's everything I feel coming back to the city of my birth, after 19 long years — open vandalism, gory blood baths in my alma mater, Jadavpur University, rampant booth capturing as the state already votes in some parts, Narada and Sarada scams, blue and white painted bridges jostling for space with plush highrises and swanky malls promoted by corrupt builders, prospering thanks to an unholy Syndicate mafia.

The way the neighbourhood in South Kolkata, where I grew up, is now home to a looming temple dedicated to a homebred saint — a man called Loknath Baba whose birth anniversary is celebrated with as much aplomb as Durga Puja. Or, the festival that precedes it — Ganesh Chaturthi — that is a close competition. Our calling bell ringing non-stop as the para mastans (local rowdies), who earlier limited themselves to playing carom or Ludo under a dim street lamp, or sat perched on the broken steps of a dilapidated ancestral home, or eying young girls being accompanied by their buxom mothers in sleeveless blouses to tuition classes, at dusk. Who whistled cheaply and crooned lyrics to a popular song that was pretty much the street anthem when we were teenagers — ‘Dekha hain pehli baar, laal boudir kaalo brasserie…’

To see Hanumans and marigolds lining the deserted streets, to see policemen with water cannons and rifle-trotting CRPF jawans marching onwards, to hear my driver scurry back to my car and proclaim, wiping his sweat lined face, writ with dread.

And here’s why I am paranoid. Perplexed. And polarised between the frying pan and the fire. Which is to say, I hardly have any choice — because to me, what is even more dangerous than some grand nephew of Netaji ramble on and on about Bengalis sacrificing mutton consumption as a Gandhian principle, is the West Bengal State Commission for Protection of Child Rights (WBCPCR) five days ago directing the state police to arrest the Bharatiya Janata Party (BJP) candidate from the Diamond Harbour constituency, Nilanjan Roy, for allegedly assaulting a minor girl in South 24 Parganas in West Bengal.

Just to put my fears in perspective, there has been an 11% rise in crimes against children in 2015-2016, with Bengal being one of the top five states for child abuse, with the maximum number of missing children standing at 16,881 in 2015-16.

The highest number of such cases were reported from Bankura district (23), followed by Nadia (16) and Purba Medinipur (10).

The children were in the age group of five to 17.

If you think we fare any better in the matter of adult rapes or even gang rapes, think again. A 100-year-old woman was brutally raped allegedly by a 20-year-old youth in the middle of the night in West Bengal’s Nadia district in 2018. More than 8,000 cases of human trafficking were reported in India in 2016, while 23,000 victims, including 182 foreigners, were rescued during the year, according to the National Crime Records Bureau (NCRB) data. In 2017, a total of 8,132 cases were reported from across the country, compared to the 6,877 cases in 2015. Of the total 15,379 victims in these cases, 58% were below the age of 18, according to the latest NCRB statistics on crime released for 2016.

West Bengal topped the list in reported cases of human trafficking at 3,579, accounting for 44% of total cases in India. 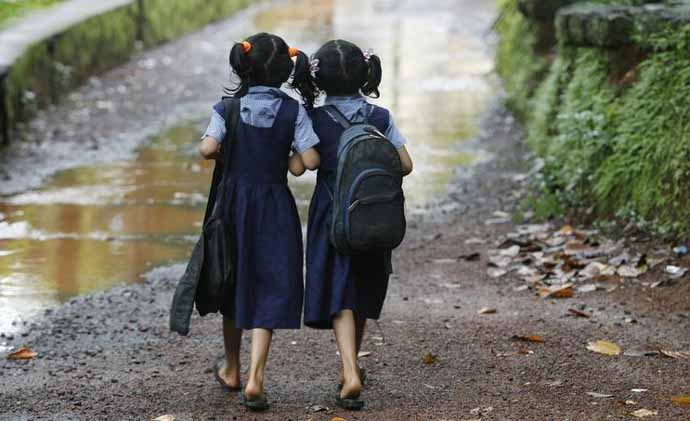 As the state burns, has anyone thought of saving the children of Bengal? (Photo: Reuters)

The state had reported 1,255 such cases in 2015 when it ranked second only to Assam.

Or maybe this was what Mamta Banerjee inferred a few years ago — “Earlier if men and women would hold hands, they would get caught by parents and reprimanded but now everything is so open. It’s like an open market with open options,” she had controversially stated, drawing much public ire. Or her bizarre remark in 2013, “The population is increasing. Is the population in Bengal the same as it was during the time of Bidhan Chandra Roy, the first Chief Minister of Bengal? You have raised many questions on law and order. You are saying that rapes are increasing and shopping malls are increasing. Multiplexes are coming up. Young people are becoming modern. Don’t you welcome it?”

What can get worse then, you may ask.

Why am I edgy?

Why the bust of a social reformer that half the country hadn’t even heard of before the news broke makes me wary of the new colonisers any more than the present day rulers?

Why I am asked by my mother to not return alone from the neighbourhood fish market or take a walk alone after dinner? Why does she panic when I don’t answer my calls en route an Ola cab? Why she warns me from making public appearances on television debates? From speaking out frankly? From taking a stand. From saying that I fear both — equally.

That the TMC hooliganism in a party filled with mostly erstwhile Left cadres — unemployed men with high levels of testosterone who used to get off on the promise of Ma, Mati, Manush, probably one of the 2.5 million graduates lining up for 5,000 government jobs in 2017, who letch lewdly at Moonmoon Sen, a TMC candidate this year, with the same vulgarity as Tapas Pal, party leader and former matinee idol had once openly made rape threats on a public dais.

I am sick of being told I am unsafe. I am sick of being asked to turn shuddh shakahari — the way I feel when I take my ten-year-old sister to a KFC outlet to find that 'tandoori aloo' and 'hare bhare mushroom' has infiltrated the meat-laden menu-card. I am sick of being harassed for chanda (akin to hafta, but for a religious cause) for every Goddess there is. Of being asked to cough up upwards of a thousand for Sitala Ma. And again, for Ma Manasa. Before Saraswati and Lakshmi puja. Before the festival I now most dread — Durga Puja. I cannot say no. I live in a highrise.

I am rich, therefore.

I wear shorts to a mall and speak more English than Bangla.

I am Anglicized. I am alien. I am an aftermath.

Shree Ram asking me to cover up my cleavage?

Or me singing bhajans when my taxi is chased by a bunch of hoodlums on a bike, licking their lower lips suggestively. Or should I start reciting the Bhagwad Gita? Hide that I am a Buddhist? Should I tell my family members — the upper class, genteel 'bhadraloks' — that maybe we shouldn’t hate Muslims or Bangladeshis so much?

Maybe they are more than a neighbour. Or a vote bank. Or a biryani vendor. Or a tailor in Park Circus. For decades, we lived together in peace. Is that peace smashed now? (Photo: Reuters)

Maybe we must choose sides.

When the time comes.

Maybe this battle is more than just a ban.

Maybe, like my house-help Sarala (name changed) said to me this morning: ‘I told my daughter, just keep the vote papers given by the TMC goons. We will not cast our votes for them. They promised a pucca roof the last time. Locking up women and men and children in their homes and threatening violence last time during the Panchayat elections, if we didn’t vote in their favour. I am scared they will rape my daughter…anyone can in this country. Anywhere…no one is safe, Didi.’

Sarala, who travels by local train.

Sarala, who has been made the same promise by the BJP.

Sarala, who knows she is not safe.

Who calls her daughter the way my mother now does.

Whose husband is a drunk who worked for the CPM, and called her a ‘chhenal’ (prostitute) many times. Beating her up even. The village Panchayat decreeing twice when she escaped from her husband’s home and took a local train to Kolkata in search of employment. Who was discovered six months later and dragged back — with the help of local party henchmen. Who was allowed to continue working to keep the home fires running — but must return at night.

Her daughter, who is 15, hasn’t reached home after tuitions.

‘Ishwar Chandra Vidyasagar was a great reformer. He was instrumental to the British passing the Widow Remarriage Act,’ my mother, a widow herself who remarried two decades ago, explains to my ten-year-old baby sister as we watch the news. Today, riots in a Cal college. Tomorrow where will they be? (Photo: PTI)

‘They will give a cycle so that my girl can come home faster…’ Sarala rues.

The television throws up images of yesterday’s street fight.

There is a still of a woman being dragged by some protestors.

Her mouth, wide open. Her dupatta, dishevelled. Like her tresses….

Also read: The more things change, the more they stay the same: How Bengal poll violence proves this again and again