House of the Dragon on Hotstar mid-season review: A promising flight away from GoT

The fifth episode of House of the Dragon aired today, giving us more royal drama and another “red wedding”. With five more episodes to go to the end of the debut season, has the Game of Thrones prequel managed to match its original?

It is too soon to answer this question and comparisons with the HBO series will be inevitable (especially when the makers decided to use the same theme music by Ramin Djawadi for the opening credits). But despite the thematic similarities and Westerosi mythos, the characters of House of the Dragon have eventually gained individuality that helps the show stand out on its own.

Much like some of the major segments in Game of Thrones, House of the Dragon is set in the confines of the courts of King’s Landing. As expected, the Iron Throne is a recurring and crucial motif of power for most of the power-hungry characters. In this sense, the Shakespearean theatrics are in full swing with even the melodramatic monologues not being too cringe-inducing.

Starting with Paddy Considine’s portrayal of King Viserys Targaryen, he plays a monarch who is mellower and less pompous than his successors. Compared with characters from the sequel series, Viserys lacks the charisma of Robert Baratheon or the heroism of Ned Stark. Neither is he cunning like the spoilt brat Joffrey Baratheon nor timid like the young king Tommen Baratheon. All in all, Viserys can be seen as an “NPC” king (NPC standing for Non-Playable Character, the background characters in a video game).

And Considine is perfect for capturing the confusion of the monarch with his drooping facial expressions and intentionally exhausted dialogue delivery. In the latest episode, for instance, he laments on how he might have kept his kingdom stable but the future generations will never sing any songs celebrating him or his legacy. 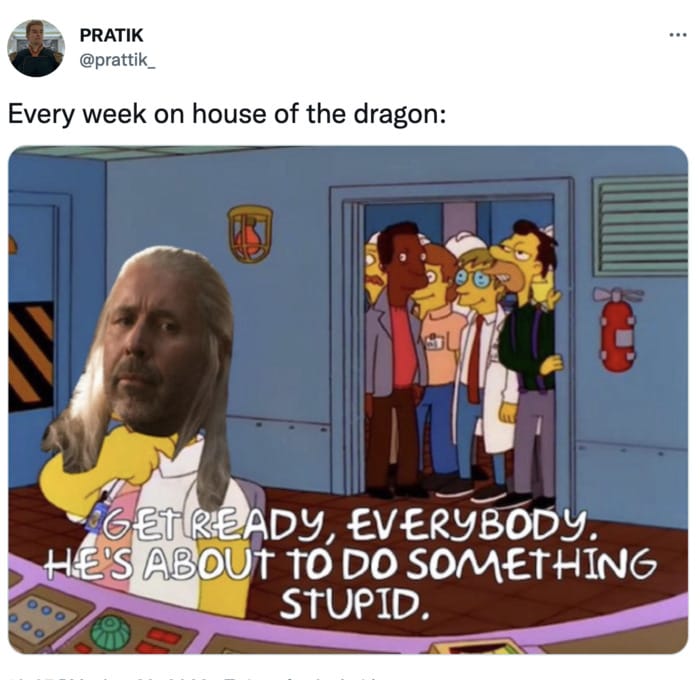 Joining King Viserys is his hot-headed and competitive brother Aegon, played by Matt Smith. An actor having enough experience (and the face) for being the series villain, Smith’s actions and words make him easily vile and hateable. His character is still pretty one-dimensional for now and only the future seasons would tell if viewers would be able to explore the nuances behind his evil nature (or even an unexpected soft side); something that we saw in the arcs of Game of Thrones characters such as Jaimie Lannister.

The way Emilia Clarke’s random facial expression turned into a meme, birthed the signature Targaryen smirk on the show.

Everybody on House of the Dragon has to thank Emilia Clarke for making Daenerys so iconic. https://t.co/SH4elLyqbk

In fact, if there is a villain so far who can really pull the strings, it is Rhys Ifans’s Otto Hightower, the royal advisor (King’s Hand in GoT lingo) to King Viserys. Ifans who might be known to mainstream audiences as the forgettable villain Lizard in Spider-Man movies, finally gets to shine as he plays the character with a mild-mannered and sly viciousness. And much like Petyr Baelish (AKA Littlefinger) from Game of Thrones, a gossipmonger like Otto would play a crucial role in deciding the future of the throne. After all, it is the kingmaker who turns out to be more powerful than the king himself.

Rhaenyra is a promising protagonist. Comparisons with Daenerys are normal but not that significant.

Added to King Viserys’s pressure is the lack of a male heir forcing him to go against the sexist norms of ascension and appoint his daughter Rhaenrya Targaryen as his heir apparent. Rhaenyra, who is played by newcomer Milly Alcock, is quite a promising protagonist. While the pilot might have led viewers to compare her with Daenerys (Rhaenyra’s future descendant), she offers potential to carve her own arc.

Her love for dragons might make her a Daenrys archetype but given that both characters have had vastly different origins, Rhaenrya’s evolution will be hopefully different. While Daenerys rose from the ashes, assuming control over the Dothrakis, and conquering multiple kingdoms, she turned into an intimidating invader with her eyes set on the Throne (before the writers ruined the pace with her sudden evolution into a “Mad Queen” in the polarising final season). In this sense, Rhaenyra is different having never set foot outside the royal court.

don’t got hbo money rn so having to follow literally every single thing about the house of dragons show via tiktoks, twitter, and memes and you know what? i wouldn’t rather consume it any other way pic.twitter.com/1nhpDlsk9p

There is also a little bit of Sansa and Arya in Rhaenyra due to her royal aspirations as well as her wish to explore her independence in the outside world. With controlled acting and naivety in her eyes, Alcock succeeds at evoking this duality through her character. The shocking scenes of Rhaenyra drinking wine and making love with her antagonistic uncle Aegon convey her cravings for freedom as an outsider.

But at the same time, she is quite the opportunist and uses her royal background to the fullest, be it influencing a chaste knight to make love with her or agreeing to a “transactional marriage” for the sake of the throne.

Very kind of House of the Dragon to give us the perfect meme for so many things right now pic.twitter.com/dkNFgNxksW

Sadly, Alcock’s stint on the show would last only five episodes as next week’s episode would have a ten-year-time jump with new actresses replacing Rhaenyra and her companion/Viserys’s second wife Alicient Hightower (played by Emily Carey till now). Given that both Rhaenyra and Alicient started out as good friends and now have a love-hate relationship, it is going to be heavily entertaining to see how their future versions would interact.

Sensual sex scenes with a reduced male gaze: An empathetic lens towards sex

Set in scenarios inspired by Medieval Europe, it is rare to see any female characters assume positions of power in the fantasy world that George RR Martin’s novels have created. Despite offering strong characters like Cersei Lannister and Daenerys Targaryen, Game of Thrones has had its own flaws in representation of women. One instance is the increasingly male gaze (almost compared to pornographic levels by some) towards female nudity in scenes involving Daenerys.

The innumerable sex scenes in the original have similarly been the subject of much debate. But much like conventional pornography, most of them are reduced to displays of “rough sex”. As pointed out in a viral thread by Twitter user Paridhi Puri (@apparitionnow), the lovemaking scene between Rhaenyra and Colin is one of the aspects that sets House of the Dragon apart from Game of Thrones.

Today's episode of House of the Dragon, King of the Narrow Sea, has been directed by a woman, Clare Kilner. This is also the episode with the most sex scenes till now, and I wanted to write a thread about how the show made it quite different from the ones in Game of Thrones.

Puri adds that it is worth mentioning that this episode was directed by a woman Clare Kilner, a much-needed step to not just stray away from the dominant male gaze but also HBO’s way of avoiding bad press since “GoT infamously had an extremely unsafe environment for actresses when they shot nude scenes”. Further, the showrunners of the original also drew flak for “making up rape scenes that never existed in the books”.

While Rhaenyra and Aegon seem to be involved in a passionate embrace followed by Rhaenrya making love with the knight Ser Colin, these scenes of sexual arousal are contrasted with a simultaneous scene of King Viserys having sex with his young wife Alicient (who is visibly emotionless).

Puri sums up this contrast in the best way possible. “When a main female character eventually has sex, her body isn’t framed in a lascivious way - she’s young, zealous, rebellious…simultaneously, we see another character going through the motions without feeling anything and we feel the discomfort there too, without too much body exposition. This is the importance of female directors and intimacy coordinators…you make sex a meaningful plot point without exploiting.”

Coupled with the shockingly graphic and impactful pregnancy death in the pilot episode (that we touched upon in our previous review), House of the Dragon offers plenty of potential to undo the debatable aspects of its predecessor.