Filled with cringe-inducing dialogues, Pathaan is still saved by its leading man's charisma, some well-choreographed action, and of course the Tiger cameo (photo-DailyO)

Does it look like Don 3? Does writer-director Siddharth Anand rehash his own Bang Bang and War? Does Salman Khan’s Tiger have a cameo? Is John Abraham really 50 years old? The answer is yes to all these questions.

Right from the first teaser, Pathaan came off as a mishmash of Anand’s previous ventures (with War even canonically connected to Pathaan) and the long-awaited Don 3 that SRK fans have still not received. And while this is indeed true, the action flick with a 250-crore budget still has enough to stand out as a massy entertainer, thanks to Anand milking out the full capitalistic potential of Khan’s star persona.

It’s common knowledge that Khan had not been having a good box office record in the late 2010s with blunders like Jab Harry Met Sejal and Zero. So, Pathaan might just be the life-saver for his career, tailor-made for Shah Rukh fans. Not only do we see him spread his hands in the “airport security checking pose” (here's looking at you US!) and sport his long locks (which do need some shampooing) from Don 2 but he also talks to a certain Karen by calling her “K…K…K…Karen”.

I fully understand & respect security with the way the world is, but to be detained at US immigration every damn time really really sucks.

Anand and the folks at Yash Raj Films (YRF) have also made special arrangements for “Bhai” fans. As Pathaan is the latest installment in the larger YRF Spy Universe (Ek Tha Tiger, War), Salman Khan’s Tiger also makes a special appearance like a WWE wrestler, complete with his theme song (Swag Se Swagat) and trademark checkered scarf. If this weren’t enough, the first day first show audiences would also have to sit through the teaser for Kisi Ka Bhai Kisi Ki Jaan (that deserves an entirely different article; soon).

So, yes, Pathaan excels in terms of fan service. One can only hope that such effort was given to the screenplay too. Drawing on Siddharth Anand’s story, his War collaborator and CID alumnus (over 72 episodes) Shridhar Raghavan pens some dialogues that seem to stem from the mind of a middle-aged man trying hard to ape a Gen-Zer.

For instance, the very opening scene finds a Pakistani General asking why a doctor is staring so intently at his medical scans,

That roughly translates to, “After all, it is not a beautiful woman’s Instagram.”

Some other screenwriting “gems” from the film including Dimple Kapadia’s character (very reminiscent of Judi Dench playing the MI6 chief M in James Bond films) expresses her displeasure over some administrative tussle that Shah Rukh’s Pathaan convinces her to indulge in.

(There’s so much red tape that our hands would be stuck.)

Even Deepika Padukone’s Rubina gets her shot at trying to sound “hip” by dropping a forced “Say what?” while talking to Pathaan. Despite Rubina engaging in some well-choreographed close combat and bashing up one hunk after the other, Pathaan remarks, “Women.”

But perhaps in terms of poorly-penned dialogues, the cherry on the top is taken by a crass “dad joke”. The scene finds SRK talking to a Russian sex worker for one of his covert operations. Running on the male gaze, the camera zooms in on her cleavage and Pathaan asks her if she is interested in earning 20,000 “boob-les”. Deepika’s Rubina disappointedly corrects him by saying 20,000 rubles.

Talking about the male gaze, as all James Bond-esque spy thrillers go, the heroine is yet again reduced to a seductress in a few scenes even though Deepika gives her all for the limited screen time she gets (this is, after all, an SRK film). Yes, her blonde disguise comes off as a bad cosplay attempt at Skyfall’s villain Raoul Silva but thankfully, her fast-paced fight scenes play off convincingly. A little backstory also comes off as a welcome distraction.

The male gaze rather lies on the sculpted abs on John Abraham’s upper torso. John might not be that fine of an actor but Anand and his crew make sure they can advertise his good looks and physique to the fullest. Apologies to the bare-chested, veiny Shah Rukh but John would be Pathaan’s eye-candy. 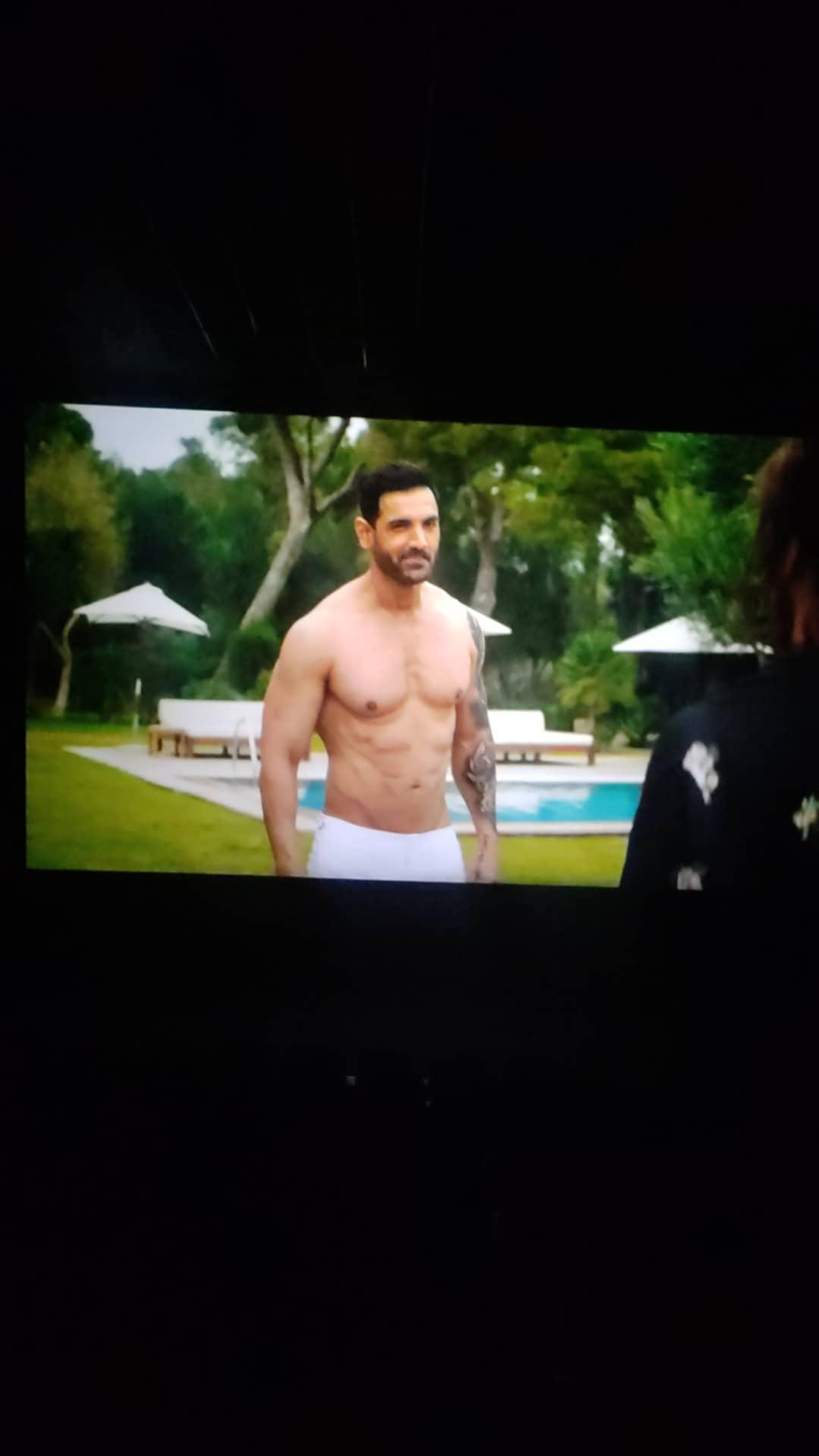 Abraham plays the villain Jim, a rogue Indian soldier who now orchestrates global terror as a mercenary. The biggest threat in his latest plan is not the heroic Pathaan but (yet again) Shridhar Raghavan’s dialogues. Not to delve much into spoilers, one of Jim’s early scenes finds him introducing as a former “aashiq” (lover) of someone, the same someone to whom Pathaan himself might be a “beta” (son). However, Jim left her because she broke her heart.

Any guesses who are we talking about?

Yes, despite Abraham’s towering physique making him look menacing, his old love for Mother India and the rest of his dialogues make it difficult to take his words seriously.

So, all this cribbing about Pathaan’s writing begs the question: Should you even watch Pathaan for the script?

With a film that is intentionally written for characters to drop one “filmy” quotable after the other, Pathaan does the job. Yes, unsurprisingly, the big-budget action scenes are devoid of logic (Shah Rukh and John have an aerial battle wearing bird suits, taking perfect aim in mid-air without any skydiving eyewear) but that doesn’t stop Pathaan being an entertainer for the masses.

Despite being a masala watch, Pathaan’s action direction and stunt performances under stunt coordinator Melroy Dasilve are also quite better than the expected standards. Some forgivable CGI shoddiness aside, there is no dearth of enjoyable car chases, hand-to-hand combat, and running around in international locations. Bollywood fans desperately seeking a big-screen spectacle will be adequately amused with enough physics-defying stunts to make Pathaan comparable to one of the over-the-top Fast and Furious films.

A big hug to all for making #Pathaan so loved. Those who danced, put up cut outs, bought out halls, all fan clubs, made t shirts, prayed, helped to ease issues & made it a festival. It’s good to be in theatres, feels like home. A quick #AskSRK for fun.

In the end, Pathaan is every bit worth the hype as an entertainer. It is a familiar retelling of the “secret agent saving the world” narrative but given the endless stunts and chases, one wouldn’t mind the cliches. Obviously, a more polished script and slight trimming of the runtime (it clocks at 2 hours and 26 minutes) could have made Pathaan even more hype-worthy.

Salman’s cameo makes it obvious that Pathaan will return in Tiger 3 and other properties of the YRF Spy Universe. War’s Ashutosh Rana returns as Colonel, a grumpy intelligence chief who is YRF’s answer to the Marvel Cinematic Universe’s Nick Fury. He even has a scar on his eyes like Fury! With Hrithik Roshan’s War character Kabir also name-dropped several times, it is clear that Ashutosh “Nicky Fury” Rana will “assemble” all of his “Avengers” in the next Spy films. Till then, Pathaan can be enjoyed in the theatres.
.
We're going with 3.5 out of 5 stars for Pathaan. Watch it on the big screen.