Remembering Mac Miller: His legacy and the drug that killed him

On Mac Miller’s fourth death anniversary today, here’s a retrospective on the rapper's prolific career cut short by an opioid, fentanyl, that has spearheaded the opioid crisis in the US.

It has been four years since Malcolm James McCormick, more popularly known as Mac Miller, tragically lost his life at 26, after a long battle against depression and drug abuse.

In these four years, Miller’s discography remains just as vibrant and colourful as it once was; the rapper leaving a lasting imprint on the industry and its many personalities before his passing.

Here’s a quick look at Miller’s career and musical legacy:

On September 7, 2018, Miller was found unresponsive in his Studio City home in Pittsburgh by his personal assistant, who called 911 and performed CPR until paramedics arrived. He was pronounced dead at the scene at 11.51 am.

Thousands of fans held a vigil for Miller on September 11, 2018, at Pittsburgh's Blue Slide Park, the inspiration behind his debut album title. The site continues to be a place of remembrance.

In November 2018, a post mortem revealed that he died from an accidental drug overdose due to a "mixed drug toxicity" of fentanyl, cocaine, and alcohol. Three men were arrested in September 2019 during an investigation into Miller's death. He was sold counterfeit oxycodone pills containing fentanyl two days before his death. Miller had asked for Percocet, a prescribed painkiller containing oxycodone, in addition to cocaine and Xanax. Investigators believe Miller snorted the laced pills before his death.

Since 2000, more than a million people in the United States have died of drug overdoses, the majority of which were driven by fentanyl and other synthetic opioids in recent years. 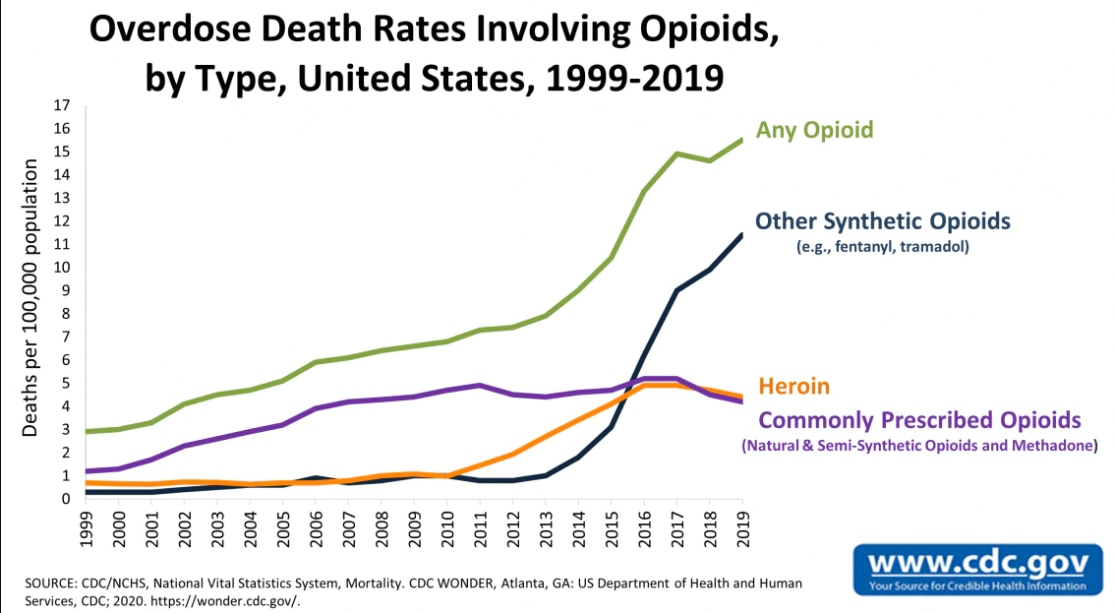 The US Center for Disease Control and Prevention notes that fentanyl is most often used in combination with other drugs, such as cocaine, or with alcohol, which increases the risk of overdose; as was the case with Mac Miller.

Law enforcement officials often refer to fentanyl as “manufactured death” because it is cheaper and up to 50 times more potent than heroin. Fentanyl is shorter-acting than heroin and its withdrawal pains usually arrive sooner, which means many users are driven to buy fentanyl at a faster pace than heroin.

The supply for the drug originates from a long, complex line of routes and reroutes between Chinese and Indian producers that source Mexican cartels, which in turn distribute the illicit substance across the United States.

The US fentanyl abuse is at an all-time high and has spearheaded the opioid crisis over the last few years with no sign of slowing down.

To know more about the opioid crisis and how opioids effect our systems and cause addiction: Emmy frontrunner Dopesick finds new meaning as big-pharma opioid crisis settlements soar .

On October 31, 2018, a tribute concert, Mac Miller: A Celebration of Life, took place in Los Angeles.

Many of his friends and collaborators performed or provided messages at the concert; proceeds raised benefited the newly established Mac Miller Circles Fund, which aims to support youth arts and community-building programs in his memory. The charity had raised over $700,000 by January 2019, which was used to launch their Mac Miller Legacy Fund to help young musicians with substance abuse issues.

But before we close, here are some of our favourite tracks by Mac Miller, an instant shot of smooth, mellow vibes that'll remain just as good as the first time we listened to them...