Star Wars Rogue One prequel series Andor trailer is here. Plus a Rogue One quiz for you

It has been over six years since Gareth Edwards' addition to the Star Wars canon, Rogue One: A Star Wars Story, hit the theatres. Now in the Disney+ era of the franchise, the latest Star Wars series Andor, teases the return of familiar faces and exciting stories waiting to be told.

Following the fantastic reception of its teaser two months ago, the trailer for Andor just dropped and has been met with similar responses from the fans. Here is a quick look at the new trailer:

The series primarily follows the Rebel spy Cassian Andor in his formative years while serving the Rebellion and takes place before the events of Rogue One. But before we proceed any further, take this short quiz on how much you remember from Rogue One:

The prequel to Rogue One, the story will follow Diego Luna’s Andor on a series of dangerous missions for the Rebellion. Showrunner Tony Gilroy is helming the Andor series, writing and directing multiple episodes on the 12-episode series with Luna as executive producer.

Pandemic problems: Although production began in 2020, filming was delayed and postponed due the pandemic, having only completed in late 2021. Unlike its live-action Star Wars series peers in The Mandalorian and The Book of Boba Fett, Andor was filmed completely on location and set and did not make use of StageCraft (the wrap-around LED screen for virtual setting).

Set in between Episode III and IV, Andor takes place during the darkest times of the Star Wars canon, when the Empire is at its strongest. “The Empire is choking us so slowly, we’re starting not to notice,” says Stellan Skarsgard’s Luthen Rael rather solemnly. Skarsgard and Luna are joined by Genevieve O’Reilly, Adria Arjona, Denise Gough, Kyle Soller and Fiona Shaw, who make up the ensemble cast in the series. Forrest Whitaker’s extremist leader Saw Gerrera also makes an appearance in the trailer. 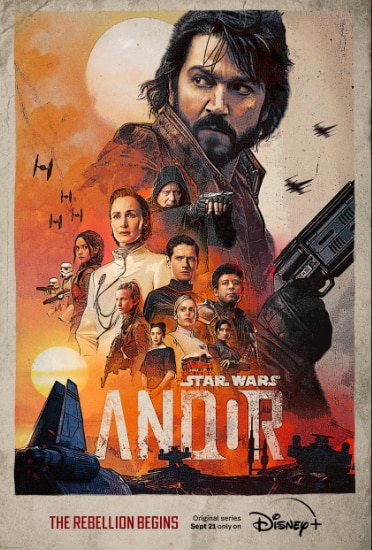 Emmy award-winning composer Nicholas Brittell, of Succession fame, is crafting the original score for the series while Jonathan Freeman and Adriano Goldman are in charge of cinematography.

The first three episodes of Andor stream on Disney+ Hotstar on September 21, 2022.