From a late visit by CM Nitish Kumar to hospitals, to a minister asking for cricket scores during a meeting on the crisis, India's political leadership is failing its children.

Over 100 children in Bihar have died due to acute encephalitis syndrome (AES), commonly known as brain fever, so far.

The continuing deaths of poor children have not only exposed the lack of preparedness of the Bihar administration but also led to a massive uproar. The National Human Rights Commission (NHRC) has taken suo motu cognisance of media reports about the AES deaths. What has, however, surprised many are the insensitive comments and callous attitude of those ruling at the Centre and in Bihar.

Let us take a look at some of these comments — and attitudes.

On 18 June, when Bihar Chief Minister Nitish Kumar visited the Sri Krishna Medical College Hospital (SKMCH), the epicentre of AES, he was jeered at and asked to go back by angry protesters. People gathered outside SKMCH were upset that the chief minister had taken three weeks to schedule a visit since the AES cases spiked. Many weeks later: Nitish Kumar takes stock of a hospital where children suffering from AES were admitted. (Photo: PTI)

Minister says it is not important for CM to meet patients

Shyam Rajak, a Janata Dal (United) minister in the Bihar government, when asked if CM Nitish Kumar would visit SKMCH, said: "Everything is being monitored by CM. What is important? Monitoring and treating the patients or him visiting here?"

Shyam Rajak, Bihar Minister when asked if CM Nitish Kumar will visit SKMCH, Muzaffarpur where more than 80 patients have died due to Acute Encephalitis Syndrome (AES): Everything is being monitored by CM. What is important? Monitoring & treating the patients or him visiting here? pic.twitter.com/zdF1W0JHy6

Minister says 'no one is permanent'

Responding to media questions over the Bihar government's apparent inefficiency in taking adequate steps to prevent AES deaths, Bihar tourism minister Pramod Kumar said, "There is a disease and there is a cure to the disease. Stop the talks now. If it is a disease, then it is a disease. It can happen to anyone at any time. There is no end to that. If that could be stopped, then we would have been immortal. Bihar Health Ministry is working but disease can happen anytime to anyone. Both the state and central government are working at its pace".

Health Minister asks India's score at a meeting on encephalitis

Bihar health minister Mangal Pandey is under attack for having enquired about a cricket score at an important meeting over the outbreak of AES.

In a video recording, the minister is heard asking, "How many wickets have fallen?"

He was attending a meeting with Union Health Minister Harsh Vardhan and MoS Ashwini Choubey.

He said, "During India-Pakistan matches, there's nationalism in people's heart, they want India to win. They did everything seriously in the meeting and asked for the score in-between, the Opposition's allegations aren't true."

According to HuffPost India, when state health minister Mangal Pandey visited Muzaffarpur on 14 June, an ambulance, managed by a doctor, a nurse, a blood bank technician, an emergency medical technician and a driver, was with him throughout the visit — not only was this, at the hospital, an ambulance with a patient was stopped to make way for Pandey's convoy. This happened when the SKMCH has been grappling with a shortage of doctors. Against a sanctioned strength of 114 doctors, it had only 84.

When the encephalitis crisis broke out, Bihar's health minister chose to fly to Canada

On June 5, Pandey addressed a conference in Canada's Vancouver on the issue of gender equality.

According to one news report, he had left for a four-day conference in Vancouver on June 4. By then, seven deaths had already taken place at SKMC.

In order to address the growing concern over deaths in Bihar due to AES, Union Health Minister Dr Harsh Vardhan called for a media briefing — there were reports that MoS Health Choubey had his eyes shut and had dozed off at the meeting.

On being questioned by the media, he said, "Main manan chintan bhi karta hoon na, main so nahi raha tha (I contemplate also. I was not sleeping)." 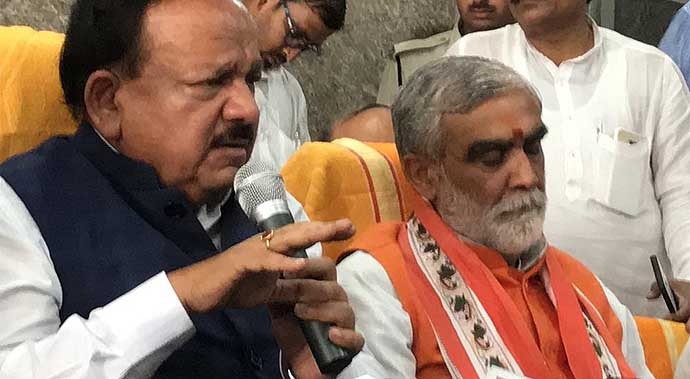 The Union health minister proposed on June 16, 2019, a virology laboratory in Muzaffarpur and a 100-bed paediatric ICU — he had reportedly promised the same in 2014, but there's hardly anything to show for his promise on the ground.

While both the Bihar government and Centre may be working hard to overcome the medical crisis, such comments and actions do not send out the right message to the public.

At a time like this, the public must be assured that their leaders care for them. They should not be made to feel the exact opposite.

Also read: Didi vs Perfect Storm: Why West Bengal's Trinamool Congress may soon reach a point of no return