Allahabad to Prayagraj, Shimla to Shyamala — are we missing the real point here?

"What's in a name? That which we call a rose. By any other name would smell as sweet."

These lines from William Shakespeare’s Romeo and Juliet have little romance and theatrical intrigue when used in the context of renaming the cities in India, today. We just need to replace the word "sweet" with "foul" and the analogy fits like a hand in a glove.

For the truth of the matter is that the recent name-changing rampage that the government seems to be on, either owing to the go-to penchant of Indian politics today — Religion, or the futile need to suddenly go back to the pre-independence names coined by the British, is unnecessarily bigoted and mindless. The Shakespearean dialogue can be made to analogise with the fact that no matter what name a city is given, the problems inherent in its infrastructure — sanitation, health, education, pollution, over-population — will not go away with that most frivolous and useless of changes — the city's name. The city's cultural heritage is precisely why the name "Allahabad' needed to be preserved (Photo: Wikimedia Commons)

A deep dive into the decision makers’ reasons mostly reveals political fringe elements as the torchbearers, vociferously attempting to re-direct the course of history. Religious war-cry and a misplaced and dated communal outrage, merged with an ongoing tidal wave of outing any and every name from the time of British rule, seem to now be the propellants driving these propositions.

When Bombay was rechristened to Mumbai, it was the muscle-flexing of the Shiv Sena (that came to power in 1995) that triggered the change so that Maratha heritage could replace the legacy of British colonialism. Mired in a clash of political sentiment attached to the use of either name, 'Bambai' — as it was also previously known by Hindi speakers — got a new name, albeit just on paper.

There are so many memories attached to ‘Bombay’ that Mumbai will never know! (Photo: TourismOfIndia.com)

With some extended family living there, I used to often travel to the erstwhile ‘Bombay’ during my high school and early college days. There are so many memories attached to ‘Bombay’ and my visits there that Mumbai will never know. The midnight trips to the sevpuri wala in Santa Cruz, the uncle with his pipe tucked away in the corner of his mouth, blowing perfect smoke rings sitting on his armchair facing the sea in his Malabar Hill apartment, Colaba's tiered retail showrooms and street shops, Cafe Leopold, Juhu Beach in the rain — so many endless memories. For me, there can only be one ‘Bombay’ and yes, I still call it by that name.

Chennai, Guwahati, Bengaluru, Puducherry, the list is endless. I lived in the erstwhile Gurgaon in Haryana for a few years. The roads would disappear in the monsoons and my car would suddenly find itself lodged in a ditch where a road used to exist just the previous day. Puddles would form over days making it virtually impossible to navigate through the already anarchic traffic jams. Reaching work on time was a luxury best prayed for. Makeshift "road fixes" would then be launched that would last two days if you were lucky. Not to mention the un-safety it metes out to its woman inhabitants who have to think twice about going for a walk in their own colonies. But wait, let’s rename Gurgaon to Gurugram and see how that improves things. 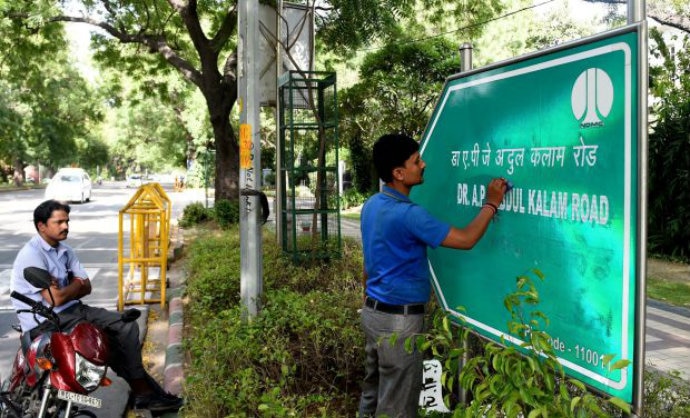 Aurangzeb Road is what will be referred to at crossings and conversations. (Photo: PTI)

When Aurangzeb Road became Abdul APJ Kalam Road in New Delhi in 2016, the debates that it sparked were quite expected. What needs to be realised is that by changing names history cannot be re-written. For the cream of the pre-millennial New Delhi residents, while the tribute to one of the greatest presidents our country has had the privilege of being governed by is very well received, Aurangzeb Road is what will be referred to at crossings and conversations.

The brouhaha gradually shifted its focus to the Congress vs. BJP narrative. Allahabad is now in the crosshairs of a name-change, and the Congress party and its supporters have vehemently opposed it. Allahabad was renamed to Prayagraj on UP minister Yogi Adityanath's proposition. Allahabad is another example of a city rich in historical and cultural heritage, with a strong association with the freedom struggle as well. For this reason alone the name needs to be preserved and not dragged into mindless communal fist fights used as bait for political vendetta.

Shimla seems to be the latest target. This headline was particularly disappointing for me. Having grown up in the foothills of the Himalayas in a city of Chandigarh from where visits to Shimla formed the highlight of our summer holidays with family, strolling for hours on the Mall Road, playing cards and reading books in our Cecil Hotel (The Oberoi Cecil, Shimla) apartment and going horseback riding while licking our fingers after visits to Trishul Bakery, are still as fresh as if it was yesterday. Let Shimla lie in its history steeped in memory and familiarity. (Photo: PTI)

‘Shyamala’ may have been the original name before the British coined it ‘Simla,’ but changing it back now will make it sound as hollow. It will indeed lose its character, as pointed out by senior Congress leader for Himachal Pradesh, Harbhajan Singh Bhajji. Instead of stripping the once idyllic holiday retreat of the name that is associated with memories, history and familiarity for its people and visitors, the government needs to be awakened to the current abysmal state of the hill station. The excessive urbanisation leading to acute water shortage, over-population, pollution of water bodies, landslides and a loss of visual appeal has rendered Shimla a most undesirable holiday destination today.

Perhaps it’s time that these real issues become a source of anger and debate and create enough furore to shift the focus to improving the health of our cities, instead of stripping them of their identities.

Also read: Lots in a name: The real significance of renaming Allahabad to Prayagraj