After Article 370, new style: This can be a fresh start for fashion designers from J&K and Ladakh

This is a carpe-diem moment for fashion designers in the UTs, to celebrate their cultural identity, educate about their roots and tell their rich textile story in designs that go beyond the pheran.

For a very long time, Jammu, Kashmir and Ladakh have been stuck in a style rut.

And the recent scrapping of Article 370 may just bring in a much-needed makeover.

Even though naysayers bandy about gloomy predictions about the newly-minted Union Territories, fashion can actually help heal the terror-ravaged areas.

Pashmina or lena and pheran are the only two sartorial statements that have barely managed to escape the Valley and make their way somewhat into mainstream fashion — but the style in Ladakh and J&K is so much richer than tourist photographs of people wearing cheap velvet pherans and holding up plastic flowers. There is more to dressing in the valley than just pherans and pashmina. (Photo: Author)

The Ladakhi choba — a voluminous frock-like outfit, often paired with a bright sash, boots made of soft traditional fabric shedma (that is at par with pashmina), the colourful traditional attire of people from Batamalu, Thigma tie-dye design and much more are yet undiscovered sartorial gems from the Valley that can now be shared with the world.

The change is already happening with designer Stanzin Palmo from Ladakh, all set to showcase her label Zilzom at Lakme Fashion Week’s Gen Next programme. Hopefully, she will not be the only one in times to come.

This is, in my mind, truly a carpe-diem moment for designers in the Valley — to own their narrative, celebrate their cultural identity and also educate the younger generation about their roots. And there is no better place to make creativity a profitable venture than the world’s fastest-growing fashion market, India — that is also poised to be the sixth-largest fashion economy in the world by 2022. 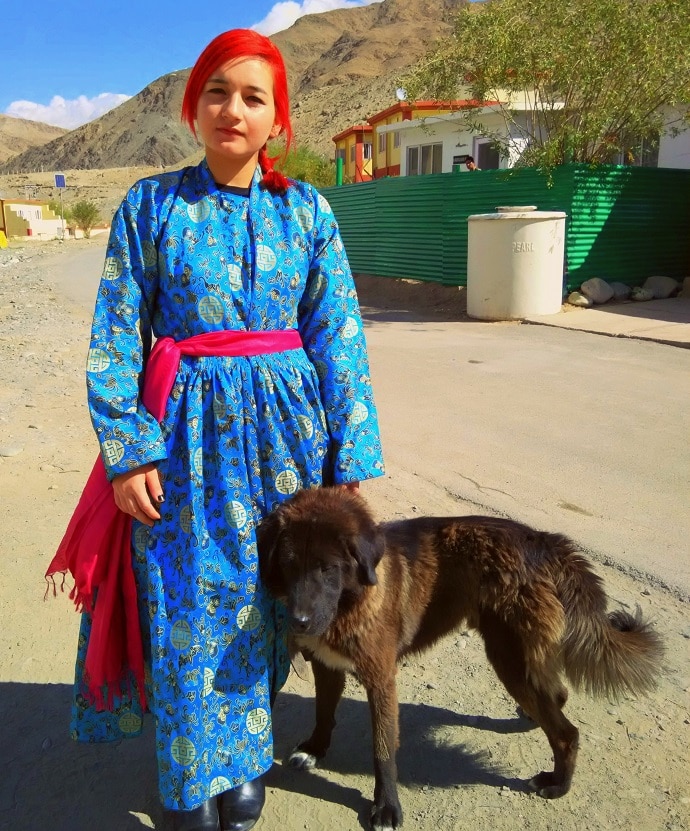 The silken, brightly-hued version of the Ladakhi choba dress is worn for festive occasions. (Photo: Author)

Designers from the North East, such as Atsu Sekhose, Mawi Keviom, Sonam Dubal, Asa Kazingmei and many others, have cashed in on the Indian fashion scene’s hunger for ‘something new’ by introducing their regional prints, tribal fabrics and style.

It was not easy for any of these designers to make it big in a market where lehengas and sherwanis are the way to earn a quick and easy buck — but they persisted and paved the way for many more couturiers in far-flung places in the country.

They are proof that fashion is not exclusive to Delhi or Mumbai — there can be a runway anywhere in the country, but only if you really want it. From outfits to hair and beauty inspirations, the valley is brimming with creativity. (Photo: Author)

Who is to say we cannot have such couturiers from Jammu and Kashmir and Ladakh? No, scrapping Article 370 has not created a Palestine.

It has nothing to do with your religion — and even less to do with vote bank manoeuvres. With corporates like Mukesh Ambani, the man behind behemoth Reliance Fashion and many other industries, promising an investment task force in the region, things can only get better for a hitherto moribund fashion economy here.

The local mythology tells the story of Duguma, a fashion angel of sorts (the wife of King Gesar), who weaves a row every year on her loom. Legend has it that once she finishes weaving her celestial fabric, the world will come to an end.

Article 370 is not the climax to the Valley's cultural fashion story.

This is not the end.

Also Read: You are what you wear: How the colour of your clothes can literally make your mood