As it's raining, let the oil drizzle to make these monsoon delicacies

Every kitchen adds its own little stamp to khichuri (khichdi) — the original Buddha bowl.

“In the spring a young Bengali’s fancy turns lightly to thoughts of khichuri.”

I know that Lord Tennyson would probably not be very happy with my butchering his immortal line, but he would possibly relent if I could feed him a plate of a piping hot khichuri on a rainy Mumbai afternoon, with a couple of pieces of potatoes nestled inside and with a liberal dash of Jharna ghee drizzled on top and with some begun bhaaja (brinjal fry) served on the side, a mamlet (omelette made in mustard oil) too perhaps. 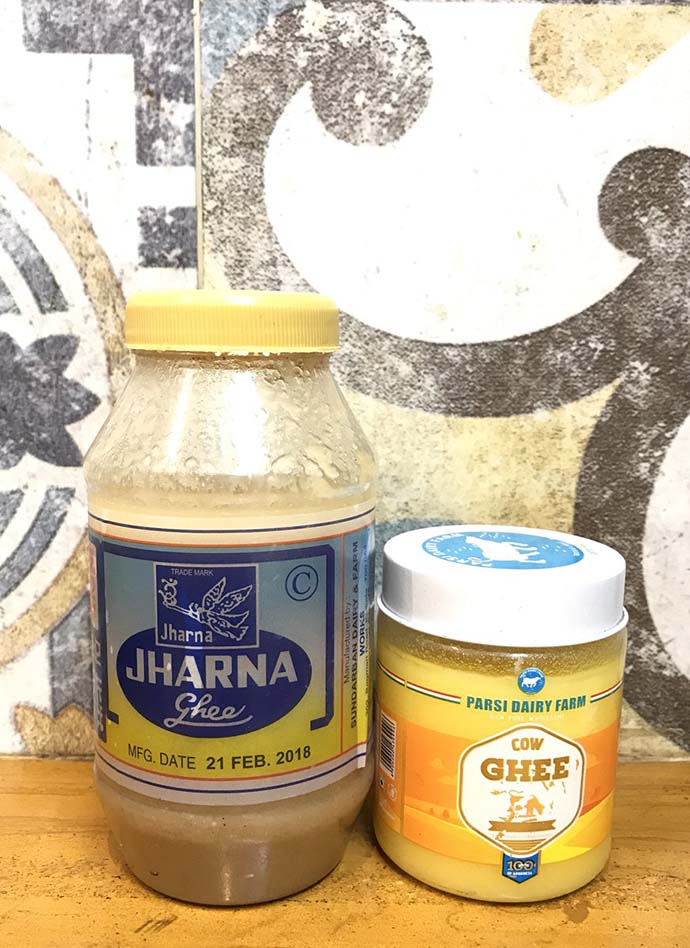 A liberal dash of Jharna ghee is what we need in our khichuri (Photo: Writer)

The ultimate peace offering would, of course, be an ilish bhaaja (hilsa fry), and a peti (belly) piece of that, as he would not be able to handle the bones of the gaada (back) of the hilsa.

At the end of which he would probably add, “For monsoon is the season for khichuri after all.”

We are in the middle of the monsoons in Mumbai right now and all I can hear is the pitter-patter of the rains while I write. On any given day, I head to the kitchen in a near Pavlovian response, to make myself a khichuri the moment it begins to rain.

It is a dish which has everything going for it during this season.

It can be a one-pot meal if you want, the original Buddha bowl, if you load it with vegetables and that saves the hassle of having too many dishes to wash and that’s a blessing in a damp kitchen.

You can make it even if you have just rice and yellow moong dal at home and every Bengali kitchen have that even if it is raining and the markets are closed. I prefer it to be bhuni, that is, not too watery; a little dry.

A freshly prepared khichuri is hot and soothing and keeps stomach bugs away. It is light and easy to digest. As is well known, the ultimate love affair that any Bengali has is with his or her digestive system.

Khichuri is easy to prepare as I said earlier and every kitchen adds its own little stamp to it. Here’s the core recipe of what I do.

A pressure cooker is faster but an open kodai (wok) allows you to check the texture and level of consistency that.

I prefer it to be bhuni, ie, not too watery. Since khichuri is all about love for us, and not just a sick man’s food, as it is considered to be in parts of India, you can add some roasted garam masala at the end and the ghee of course.

In my recent quest to eat healthier and have a more age-appropriate diet suiting that of someone approaching his mid-forties, I have experimented with a few other dishes too this monsoon. Interestingly, each draw from the shared tradition of the east of India. My preferred way of cooking bhetki is to grill lightly with a variety of seasonings.

With the ban on deep sea fishing on at the west coast, one doesn’t have access to fresh seafood in Mumbai right now. So, I go to the market and buy freshwater fish, including bhetki which most of us, the Bengalis, are so snobbish about.

“Only bhetki will do”, a Bengali will thunder if the British club-origined fish cutlet, served to him in a restaurant, is of Basa and not bhetki.

There’s a time to be a poetic and gentle bhodrolok, no doubt, but not when one spots Basa in one’s fish kobiraji, fish orly or paturi. There’s a lot which one can do with a bhetki and you can get it filleted or can keep the bone. The latter works better in curries, the former in grills, fries and as a stuffing.

I buy bhetki from our local market. These are freshly farmed and sent from Gujarat (!). My preferred way of cooking it is to grill lightly with a variety of seasonings. The one smeared with Kasundi (mustard sauce) and drizzled with honey would be the most culturally appropriate one and is a throwback to the bhetki paturi of Kolkata. Honey and mustard make for a quintessential west European marinade too and that would tickle the fancy of any "continental food", revering Bengal

At times, I prepare it with oyster sauce and stir-fried vegetables and I suspect that this could make the Waldorf-reminiscing Calcuttans, who cling on to the long-gone days of Pam Crain and Park Street, very very happy. Assamese boiled chicken: The modest name is just a disservice to the intensely flavoured dish.

My other go-to dish at the moment is Assamese “boiled chicken”. If there was ever a name that did a dish a disservice, then this would be it. Unlike the boiled veg and meat of the British isles, the Assamese boiled chicken is anything but bland.

It is a cousin of the stews of the club tents of the Kolkata Maidan, but is far more intensely flavoured.

To make this, take pieces of chicken (on the bone of course as you would love to chew on them later), finely chopped garlic, roughly diced chunks of onions, tomatoes, and vegetables like potatoes, bottle gourd or lauki, pumpkin, beans… whatever catches your fancy…even bits of karela or bitter gourd if you want, loads of fresh coriander leaves, salt, crushed black pepper.

Put all of them in a wok, switch on the burner and stir the contents for a minute or two. You do not need to add oil. Add a small measure of water to it and then let it cook on a low flame for at least half an hour. The flavour intensity comes from the juices of the chicken and the coriander leaves. Pair this, ideally, with bread rather than rice. 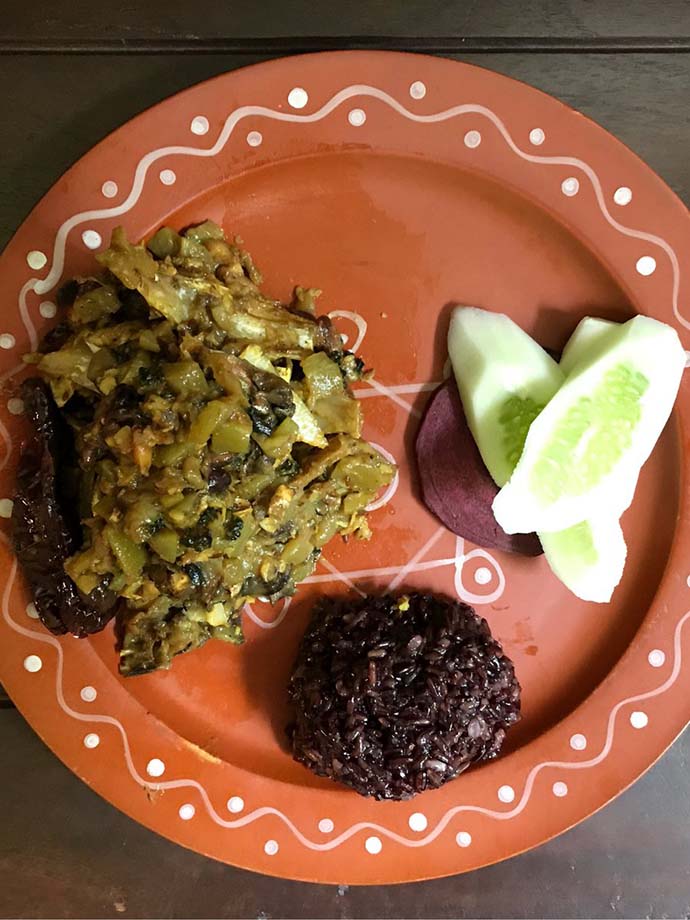 Forbidden rice: It takes a long time to cook but is filling and has a lovely nutty flavour and texture to it.

Another ingredient that I am really excited about these days is black rice.

It is supposed to be so healthy that it was called the “forbidden rice” once upon a time. The commoners were forbidden to have it as it was kept reserved for royalty.

It is consumed in Manipur in India and I recently got hold of some grown in Jorhat in upper Assam.

The rice takes a long time to cook but is filling and has a lovely nutty flavour and texture to it.

Yes, salad can be real food, if you are open to experiments.

I tried making a salad with it with some pieces of chicken remaining from a portion of the Assamese boiled chicken. You can skip the chicken, of course.

I added toasted walnuts and pumpkin seeds, and some sautéed vegetables such as bok choy and bell peppers too.

For the dressing, I used a mix of extra-virgin olive oil, hung curd, sea salt, sumac and zatar and dukkah. The latter are Lebanese spices.

It made for an easy-to-put-together salad which was packed with the good stuff, and, most importantly appealed to someone, like me, who till recently didn’t consider salads to be real food!

It is just the dish to make on a dank and dreary day and the colours on the bowl can really cheer one up. And, the immunity-boosting power of the black rice is just what one needs during the monsoons.

#Food, #Monsoon, #Khichdi, #Bengali Cuisine
The views and opinions expressed in this article are those of the authors and do not necessarily reflect the official policy or position of DailyO.in or the India Today Group. The writers are solely responsible for any claims arising out of the contents of this article.