The man behind Ministry of Crab

Ramit Mittal, the Bharti scion, has an appetite for novelty.

Ramit Mittal could have taken the easy path of a business scion and walked into an inherited office, but the eldest son of Rakesh Mittal, vice chairman and managing director of Bharti Enterprises opted to take the plunge into the uncharted waters of the food business. Leaving a job at IBM in New York, Ramit Mittal, then 32, launched a company named Gourmet Investments with the financial backing of the Bharti Family Office, and brought the UK chain, Pizza Express, into the country in 2011.

Pizza Express has had a roller coaster ride, but Mittal’s passion for food remains undiminished — having been born in Amritsar (and with his family strong Ludhiana connection), it was a given. What sets Ramit apart, though, is his prodigious appetite for new ideas. Some weeks back, he announced his plan to bring Sri Lankan maestro Dharshan Munidasa’s Ministry of Crab to India, starting with Mumbai and introduced the celebrated chef at four all-sold-out meals consisting only of his signature prawn and crab dishes. 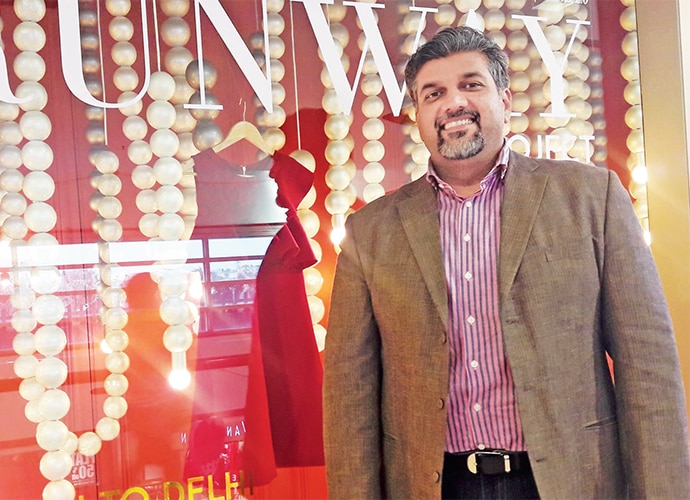 Ramit Mittal poses for a photo-op outside The Runway Project at the Select Citywalk, Saket. [Photo: Mail Today]

Everyone I spoke to, appreciated the idea of Mittal putting his money behind a restaurant concept centred on two crustaceans, but he is confident he’ll be able to pull it off with the chef’s goodwill and mud crabs sourced from India. “A country with a coastline stretching across more than 7,000km must have amazing seafood to offer,” Mittal points out, adding that we never get to taste the best Indian seafood because the international market just snaps it up. The seafood culture is also being enriched by initiatives such as the investment being made by the seafood company Cambay Tigers to develop lagoons in Navi Mumbai for crabs to breed. The quality of locally sourced seafood, according to Mittal, is only going to get better, so it’ll be easier now than ever before to run seafood restaurants in the country.

Before he launches Ministry of Crab, he has got Pizza Express, which has shown remarkable malleability for an established brand, to become a part of his “Project” experiment to develop hyper-local dining experiences, reflecting the ethos of a particular location. It took off in Mumbai with The Bandra Project, which has the vibe of a community bar and kitchen. In Delhi, high-street fashion is the inspiration for The Runway Project, which officially opened on February 8 on the second floor of the Select Citywalk, Saket. The chic yet casual conversation-friendly restaurant, with an intelligent selection of music, serves only small plates — my favourites were the eggplant wraps (involtini) packed with warm ricotta cheese, pureed dates and olive powder, evocatively named Smile for the Camera; cured watermelon medallion with a topping of roasted broccoli, goji berries, charred leeks and feta crumble (Size 0); pulled lamb and avocado puree on sourdough crostini (Crostini di Agnello); and king prawns served on olive rosemary burro fuso (butter sauce), Himalayan rock salt and Tellicherry red pepper.

I was impressed by the food innovation I saw on the plates crowding my table. Celebrity chef Vicky Ratnani has designed the menu and the just-turned-30 chef, Jerry Thomas, does a good job of translating the vision. Varun Sudhakar, till recently a Diageo brand ambassador, gives him creative support at the bar and Sonlanki Roy, the pastry chef who was working with Gaggan Anand, has laid out gorgeous desserts with elements such as chocolate cigars and pearls.

Next on Mittal’s agenda, and he just can’t suppress his excitement about it, is The Market Project, which is coming up at Kurla, Mumbai. Its menu will have what Mittal calls Italian ingredients with a Mughlai Flair (anyone for vada pao in pizza pockets, dum ki biryani risotto and phirni tiramisu?). Also coming up is a restaurant serving Hong Kong’s Typhoon Shelter cuisine (these are demarcated areas where fishing boats are parked during the typhoon season) with Kolkata’s forgotten Tangra Chinese specialities.

#Food industry, #Restaurants, #Ramit Mittal, #Bharti Mittal
The views and opinions expressed in this article are those of the authors and do not necessarily reflect the official policy or position of DailyO.in or the India Today Group. The writers are solely responsible for any claims arising out of the contents of this article.