When Khaki Shines: Constable carries bleeding man to hospital on his back

Although far less celebrated than our armed forces, an ill-equipped, understaffed and stereotyped police force is always in the thick of human challenges, and mostly manages to do a good job.

On February 23, a man in his 20s fell off a train onto the railway track in Madhya Pradesh. While other passengers dialed 100, there was no way for a police jeep or an ambulance to reach the spot in a hilly area.

And so, a Police Constable, Poonamchand Billore, walked to where the man was lying injured — and carried him to the nearest hospital on his back.

A video of the incident, showing Billore carrying the bleeding man in a ‘fireman’s lift’, has been shared widely on social media.

The man’s condition is now stable, and doctors have said that had Billore not brought him to hospital on time, ‘anything could have happened because of his head injuries’.

At a time when terrorism has snuffed out 40 brave lives and we hear Indians advocating hate and violence against other Indians, the story of Billore’s selfless bravery is heartwarming.

While this would have been a story worth applauding at any time, this is perhaps one of those periods where any story of positivity should be celebrated all the more — to bring some solace to hearts hurting over a huge tragedy, and over our political class turning it into just another bicker-storm.

But the story should also call our attention to another fact — how very brave, but how deeply underappreciated, our police force is.

Our Armed Forces, deservedly, get all the honour and glory due to them. Indians are generally proud of our soldiers and do not take insults to the Army lightly.

But the police force is known more for corruption, bribery and small-level mismanagement.

This impression, though partially true, is nevertheless cruel.

The police force is grossly underpaid, understaffed and overworked. While the government takes care of the Armed Forces relatively well — as it should — the police force often struggles for basic facilities such as houses, even coolers in police stations. The constabulary specially works on low salaries, for long hours and with few leaves. Police stations often lack adequate and latest weaponry, wirelesses sets or vehicles.

Yet, it is the police force that is the first port of call for most calamities, great or small. Inadequately equipped for everything, the police can be called on to do anything — from ensuring elderly citizens are not lonely, to battling Maoists to gangsters to responding during natural calamities.

Remember Head Constable Abhishek Patel, who, in August 2017, ran for nearly a kilometre with a live bomb to make sure it didn’t explode in a populated area? The bomb had been discovered in the backyard of a school where 400 children studied. There was no bomb disposal squad available — so the cop had to physically remove it from an area where it could cause most damage.

Or Sub Inspector Lokendra Bahuguna from Uttarakhand, who, in June 2018, carried a pilgrim who had had a heart attack two kilometres uphill on his back? 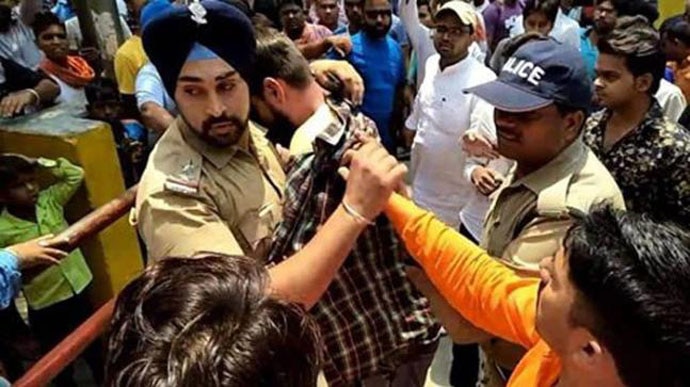 Also in 2018, Sub-inspector Gagandeep Singh prevented a Muslim man in Uttarakhand from being lynched by holding onto him tight and ensuring a slogan-chanting crowd didn’t get to him.

But despite such stories of heroism, the enduring image of a policeman for many is that of a corrupt person in cahoots with local criminals.

The police force is mostly doing a great job with very poor resources at hand — largely unsung, but on the spot, in the thick of everyday human tragedies.

It’s men like Constable Billore who carry the world on their backs, not on a grand stage of great glory, but through quite obscure bravery and uncompromising commitment to their duty.

Also read: Why the selfie of the year is anything but a selfie