Lessons on life, cooking and other things from an ingenious mother

Mothers are born coaches and teachers of master class on life and all things important. Even the little, seemingly unimportant ones that can take the shape of a fiasco in no time! The teaching begins right from the time we are in the womb. The private tête-à-têtes she has with us while going about her loaded days, the bedtime stories with wisdom clinging to them, the custom-made lullaby, lessons from which ring in our ears even when we have grown in years.

People wonder why am I so steeled up despite lashings from life and tribulations that destiny has thrown my way. And the explanation centers on how Ma brought us up. A dear school time friend mentioned to me recently what Ma told her when asked about how she faced the struggles. Ma, with her characteristic chutzpah said, “Never allow anyone to control your thoughts and actions.”

Meena Bhatt, my friend further prodded Ma – a single, widowed Mother, “How do you face your difficulties all alone?” And Ma replied, “I am not alone. I've never allowed that thought to bother me. If I do that then I may pass on my fears to my daughter. And I cannot let that happen. She has to be strong to face the adversities.”

And just like that Ma was crafting the armour that I would don for the rest of my life.

Ma was a genius. She knew a lot about a lot of things. Her interests were wide and deep and she was a perpetual learner; and a persistent teacher. Ma would intertwine lessons about life with that of accounting, cooking, gardening, housekeeping or whatever else she wanted to train me on. But some of the finest ones came from her fondness for cooking.

My mother was a great cook and indulged in cooking as a fetish. Ma was a magician too, adding that special sparkle to anything she touched. She could even snip a handful of wildly growing, wayward Amaranth leaves, tease them with fiery red chillies, team them with un-skinned potatoes, turn them over in an iron skillet and tame them into a tantalizing, lip-smacking stir-fry; just like that.

Ma learned how to cook Desi and Mughlai Indian dishes from her maternal side – they seemed to have a rich tradition of food and eating at home which borrowed heavily from the family roots both sides of the border – Punjab in India and Lahore in Pakistan.

Ma also picked up valuable skills, techniques and recipes of Continental Cuisine from my Father's long-standing Khansama – Gafoor, who was more a Man Friday and Confidante than just a cook to my Father for most of his bachelor days and well into his marriage with my Mother.       With such great schooling in culinary craft, Ma always managed to impart lasting lessons on making food – from the science of growing it in your own garden to the art of cooking it in divinely diverse and exciting ways possible – one of the permanent passions of our family. Here follow some of the finest food lessons Ma has left behind.

Ma's first lesson – you first eat with your eyes!

Ma always maintained that you first eat with your eyes. She put out her profound sense of aesthetics even in the way she created and managed her gardens, helping her win one of the biggest gardening championships in the Jhansi district for the Year 1974 and several more. She prided in her pots and pans and her finest China that she managed to lug around without any breakage from Dad's posting from one part of the country to another, then another. She would polish and clean her China and silverware and bring them out in resplendent display at the several parties she had to throw as a Cantonment Top Boss's Wife.

She taught us how different things – from salads to entrees to desserts – had to be plattered and laid out on the table – from an informal lunch for friends to more formal dinners to a larger buffet set-up for a big party at home. You need to choose your plates and platters well, she told us. You also must learn to present your food nicely in those platters, she exhorted.

All the ingredients must be in the right measure; they also must balance each other well. Her measure for spices and herbs was the time-tested Indian way – by the pinch and to the taste (swaad anusaar). For continental cuisine she would use her measuring cups but overall it was by estimation.

And what a perfectly balanced estimation that would be – never leaning too heavily on a spice so as to overwhelm the dish and spoil its taste. Ma's third lesson – Use the best produce Ma was a great proponent of organic food long before it became a modern-day fad. Much before Nature's Basket became a gourmet store, we were picking out tomatoes, aubergine, gourds – bottle, bitter, snaky, striped; spuds, chilies, garlic, radish, carrots, bell peppers fresh from her bounty-laden kitchen garden basket. A meat eater, Ma also knew how to choose and select the best piece for the dish she was going to make; from cutlets to casseroles and curries, pasandas to pilafs, roasts to roulades.

While Dad was once sold offal when he was asked to buy meat for a formal do at home, Ma knew how to direct and guide the butcher ever so gently and have him pry out just the right cut her recipe demanded.       That is one hell of a valuable lesson. Ensuring that the ingredients are the freshest and the best already puts you on a winning streak so much that even if your recipe is commonplace it always ends up tasting good. Ma's fourth lesson – Get your timing right Every cook worth his or her salt knows this. What is the smoking point of your cooking medium, just when should you add the onions and other spices, how long should the cumin seeds be allowed to sputter, at what point of cooking a dish should salt be sprinkled and when do you exactly add the tomatoes, because if you add them too soon then the sourness in them will not allow certain vegetables to cook fully – there are scores of gems that abet you in presenting that perfect platter. 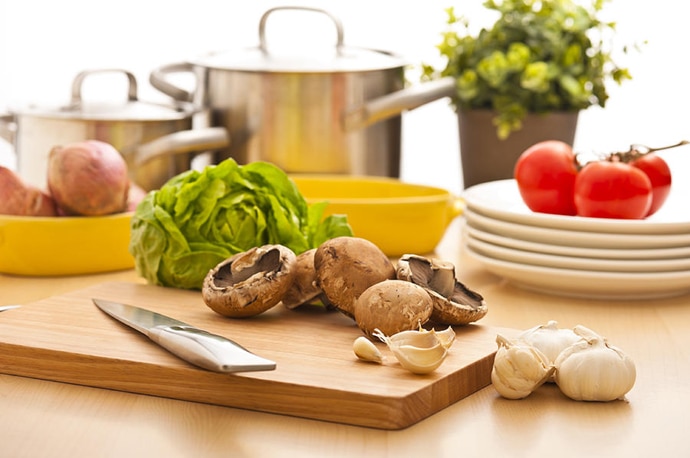 (Photo: Facebook)Ma's fifth lesson – Shape and size and why they matter

When we were too young to understand we really thought Ma was some kind of a culinary wizard – making the same egg scramble taste differently all seven days of the week if she wished, just by the swish and slice of her knife. The same was with her salads and other dishes.

As time moved on, while we still upheld that Ma was a conjurer behind the stove (or grill or oven or the big, fat, mud-coated Indian tandoor that she stood by), we also became privy to one of her easily-shared secrets. She displayed in her oeuvre that it was important to dice out perfect cuts of vegetables for different dishes. She also exhibited how each cut lent a different taste. Try it! Finely chopped tomatoes, onions or any other vegetable taste hugely different from their thick, stocky versions. They also become a different preparation if sliced lengthwise or in other shapes.

There were little things that Ma would do with her cooking to take it from one level to another. Sneak a bowlful of tomatoes under the hood of cooking vegetables to bring them to the same cooked-up level as the rest of the pack. She taught me how to brown the onions and add just that bit of water to it at the right time of frying so as to get a royal brown hue in the Shahi Pulao.

She would roll her potato wedges into a mix of flour and salt before deep frying them into golden delights with such dexterity that it would retain the inherent moisture of the potato yet turn up as the finest crispies this side of the Atlantic.

There is one official lunch I remember where she made the Shammis sans meat, using only the lentils to cater to the large herbivore guest list, such that even the die-hard meat lovers couldn't tell the difference. Ma would at times employ a western technique to an Indian dish or add an Indian seasoning to the Continental preparation to create her own innovations in the kitchen. She beat and braised, cut and combined, drizzled and dressed, mixed and melted, weaved and whipped with such precision, enthusiasm and finesse that our Annapoorna turned into Julia, Nigella, Patricia – all rolled into one. Either because she was an award-winning Civil Engineer's wife or because she had honed her observation skills, Ma had fine-tuned her trait of visualization to an attribute par excellence. In cooking, Ma would visualize how she would create and present her dish and it would turn up just the way she had thought of it in her head.

Always play it in your head before you pan it out.

Ma's biggest lesson – Nothing tastes good without passion and love

These two words have been the crux of Ma's entire life. Whether it was her much awarded gardens that she left behind as lovely gifts for the next inhabitants each time she moved with Dad for his next posting or the special classes she held at the behest of the General's wife for the benefit of the army wives, she did it all with the two most important facets of her personality – rock-steady love and intense passion. She carried the same attitude into her cooking. Because she was passionate about her produce, cooking style and end product she always presented the perfect platter, even when she cooked the simple homely fare. Her marinades were so perfectly balanced that the meat or vegetables would lay happily in this mix imbibing all the juices and flavours to the optimum.

And what can I say about her fondness for food and feeding. Feeding people was an expression of love for Ma. She is known to have won many friends and got the better of arguments and disputes just by inviting the opponent to her dinner table.

Ma even robbed me off my friend list as most of them willingly stepped into her heartwarmingly, inviting camp! The biggest lesson though, was that food is not an end in itself. It is the beginning of all things beautiful.