Five-star food will be served in a dazzling new food court at the price points of standalone restaurants.

The year about to unfold promises to be very special for Delhi's diners, who are now famous for their prodigious appetite for the exotic and the unexpected, although some people still like to dismiss them as citizen of the Republic of Butter Chicken.

This exciting new food landscape is being shaped at two extremities of Lutyens' Delhi - The Oberoi, which is reopening in record time on New Year's Day after a Rs 600-crore refurbishment, and The Chanakya, the cinema theatre where many of us have grown up and lost our innocence, which has seen an upscale makeover led by another of Delhi's hallowed institutions, the real estate company DLF, and PVR Cinemas.

I am most excited about the opening of two restaurants at The Oberoi under the leadership of Michelin-starred chefs. One of them is Andrew Wong, famous in London as the dim sum maestro. Wong's mentoring the kitchen team at the rooftop Chinese restaurant - the former Chinois Club-turned-Taipan - the more airy and contemporary Baoshuan, named after the "treasure ships" of the early 15th-century Ming dynasty admiral, Xeng He, whose armada of 317 ships and 28,000 men undertook seven voyages across the neighbouring seas that took them up to Quilon (Kollam) and Calicut (Kozhikode) in Kerala.

The cheerful Wong, the son of immigrant parents, surprised me with his wild mushroom and truffle steamed buns - they were shaped like mushrooms straight out of Alice in Wonderland. The slow-cooked glutinous carrot puff, similarly, were a treat for the eyes as well as the palate - vegetarians will have a lot to thank Chef Wong for, starting with the salt and pepper French bean fritters. Even the clear shrimp dumplings (we have always known them as har gow, but the chef likes to describe them by their English names) come with a slight touch of innovation - citrus cloud - and the pork and prawn dumplings (shumai) are presented with a strip of crackling pork.

My other favourites from the tasting menu were the 63-degree "tea egg" with shredded filo, steamed rice rolls packed with gailan (Chinese broccoli) and poached yolk, and The Oberoi Peking Duck, whose slivers are not rolled in a pancake but stuffed into a rice bun in which the famous pulled lamb burger of the central Chinese city of X'ian is served. I can assure you Baoshuan will be the talk of the town.

I haven't yet eaten at Alfred Prasad's upcoming restaurant - Omya (a conjunction of Om and Aditya, explained Jay Rathore, who has spearheaded The Oberoi's transformation) - but his fame precedes him. Having worked at Bukhara and Dakshin - the flagship restaurants of ITC Hotels - Prasad moved to London at the turn of the millennium, joined Tamarind, the home turf of Atul Kochhar before he set up Benaras, and became the youngest Indian chef to get a Michelin star.

Tamarind continues to be a Michelin-starred restaurant, but Prasad has moved on to become a jet-setting consultant chef. There's one side of him that I am particularly keen to probe deeper - that is, his passion for the cause of redirecting surplus food to those living in poverty. 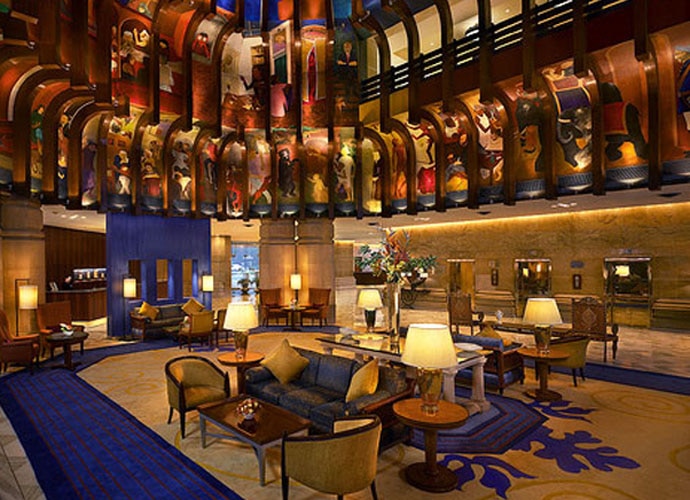 Barely a 15-minute drive from The Oberoi, The Chanakya has seen a stellar comeback, and its atrium has never been so packed with people digging ceviche, dim sum and sushi as if they are going out of fashion.

That, though, is just the trailer. Now in the finishing stages of construction, the cinema theatre's upcoming luxury mall, which will see the grand opening of Valentino, will have the most international food courts that Delhi has ever seen. On the menu are 29 cuisines, from Indian and Italian regional to a Pan-Asian offering that will cover the entire experience, from Japanese and Chinese to the entire ASEAN strip stretching from Myanmar to Indonesia.

The brainchild of Dinaz Madhukar, an ex-Taj hand who now leads DLF's luxury retail division, and Vikram Aditya Singh, the world-travelled general manager of The Lodhi, the food court is a work in progress fast nearing completion.

I can see in my mind's eye the consternation it must be causing to five-star hotels in its neighbourhood with its aggressive pricing: Rs 350 for small plates and Rs 550 for large plates. If Setz is the benchmark, the food is not going to be in any way less than five-star quality.

Also read: Why Rajinikanth and Kamal Haasan are keeping Tamil Nadu on its toes about joining politics

Post your comment
#Sushi, #Dim sum, #The Oberoi, #Delhi restaurants
The views and opinions expressed in this article are those of the authors and do not necessarily reflect the official policy or position of DailyO.in or the India Today Group. The writers are solely responsible for any claims arising out of the contents of this article.