Ma Durga is one of the oldest, most powerful and widely worshipped of the great Hindu mother goddesses, claiming the very name of Jagadamba, the "Mother of the Universe".

Ma Durga arises from Agni, the Vedic deity of fire and light as a protective force, as is mentioned in the ancient Vedic Durga Sukta. All the Devatas arise through Agni, the flame of immortal consciousness within us that brings our spiritual potentials into manifestation.

Durga literally refers to difficulty. She takes us across all difficulties like a ship across the sea, the great Vedic metaphor for going beyond all the sorrow of our Samsaric or worldly existence. Durga Devi delivers us from darkness to light, from non-being to being, from death to immortality.

Durga as Agni, the Vedic deity of speech, is the power of the divine word, the mantric vibration of cosmic intelligence that is our inner guide and guru. Agni is invoked as the first of the divine powers that manifest the divine light within us. Unless we have awakened that divine flame, will and awareness, our spiritual practices may not take us beyond the illusions of our own minds.

Agni is the divine child, Kumara, who holds the potential of immortality. 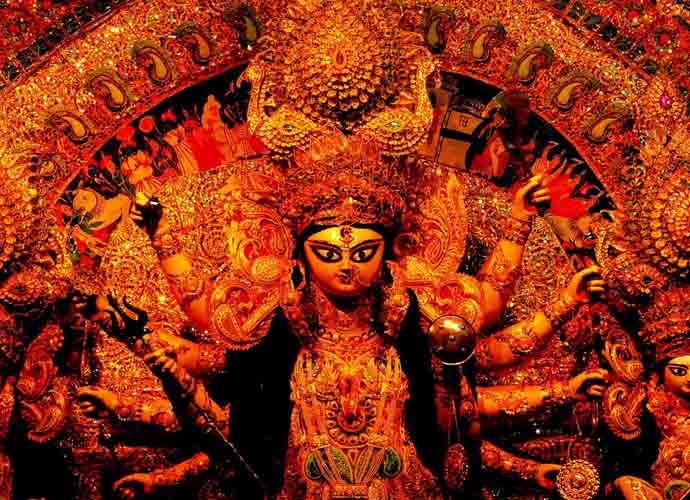 Ma Durga removes the evil forces that plague us.

Durga is his cosmic mother. She gives birth to and nurtures the Agni within us by directing the movement of our lives. Agni becomes Skanda or Murugan, the son of Shiva and Parvati who has the nature of fire and destroys all negativity. Skanda is Durga's son as Skanda Mata, one of the nine forms of

This saving power of Ma Durga is also called Tara, who similarly takes us across all difficulties like a ship across the sea. In this regard, Durga represents Divine compassion that we need to help us go beyond our karmic limitations and attachments.

Ma Durga is Aditi, the great Vedic mother goddess from whom the solar Godheads or Adityas arise, who is invoked as a ship to take us to well-being or Swasti. Aditi is the unbounded, a-diti, or the infinite. She represents the cosmic space that is the womb and matrix of all existence, yet she is also Mother

Earth, who upholds the ground of our own being.

Taking us beyond death and ignorance

Yet the most important action of Ma Durga is to take us beyond death, the greatest of all calamities and its related factors of time and karma. It is not our mere physical death that she saves us from but the spiritual death that is the ignorance of our true nature. To accomplish this extraordinary task.

Durga assumes her multi-armed martial form and wields her many weapons, extending to Lord Shiva's trishula, to destroy all the powers of darkness from our minds and hearts like so many intractable demons.

Ma Durga removes the evil forces that plague us, the forces of duality, division, conflict, and egoism that our mortal world abounds in. Yet the saving grace of Durga will not shield our own ignorance or arrogance. That she will purify with her fiery force and burn away from the core of our being. She also protects the earth and its creatures, for which humanity is becoming a great oppressor. We must honour her power and her rule over the entire universe. She does not function for our personal benefit or to fulfil our desires.

Ma Durga is not a mere formation of human thought, an image or archetype of our minds or culture. She is Adi Shakti, the inmost power of consciousness, ever taking shape within and around us as the creative and transformative force that is the essence of the cosmic life.

It is the greatness of India that Ma Durga represents its inner reality and guiding spiritual force. This same Durga becomes the Yoga Shakti that arises like a flame within the mind, expanding and uplifting our awareness to the universal self.

May that supreme Durga Shakti arise within all! May we have the receptivity to allow it to both purify our faults and energise our highest aspirations!

Also read: Politics of development over Sardar Sarovar Dam has put environment concerns in the back seat