The story of dimer devil from Maa Durga’s magical kitchen

It’s no-onion, no-garlic vegetarian fare inside puja pandals, but around them thrives a sub-culture of excellent taste bud teasers.

It was at a Durga Puja many moons ago that I had my first "dimer devil" and the memory has refused to leave my flashback bank. People mistakenly compare dimer devil with devilled eggs, but unlike the latter, it’s not a stuffed boiled egg. On the contrary, just like the Mughlai nargisi kofta, it is a boiled egg quilted by spiced minced mutton, washed with egg yolk, crumbed and fried. I was so moved by the dish that I have all my life been intrigued by its name (in the same way as I can’t imagine a Durga Puja without dimer devil).

What the devil! How can a dish as delectable as dimer devil get such a devilish name? It was only recently that I got enlightened on the subject. The blogger Sukanya Ghosh (SaffronStreaks.com) informs us that “the word ‘devil’ was coined in the year 1786 to describe a food preparation that was deep-fried and seasoned with hot spices and condiments, extremely pleasing, and certainly not relating to satanic thoughts”.

Pepper and other spices, Ghosh writes, were prized commodities in that age, so seasoning any food item with them was considered stylish, fashionable and premium. Well, what’s in a name? Call it anything as long as it tastes as good as the Durga Puja dimer devil. Dishes such as dimer devil abound in the food stalls that come up next to Durga Puja pandals with the same alacrity as the air acquires a nip in the early morning, the hibiscus trees turn red like the alta (lac dye) the goddess uses to embellish her soles, and shiuli (jasmine) flowers lend a soul-soothing fragrance to the night. You cannot imagine a Durga Puja without the rustle of new clothes and the inveigling aromas of age-old treats because, as my mother insists, when the Divine Mother comes home, she wants us to be in a celebratory mood. Even before the dawn of Panchami, even before the pre-Puja Ananda Melas have started, I can smell dimer devil in the air. Dimer devil, fish fry and other delectables from the Durga Puja smorgasbord.

For as long as people can remember, from the time it used to be celebrated with pomp and grandeur by Bengal’s rural zamindars, Durga Puja has been synonymous with the worship of good taste. It remained so as it travelled from the country to the city. In her colourful and informative coffee-table book, Durga Puja: Celebrating the Goddess, Then and Now, Sudeshna Banerjee informs us that one of the first community pujas of Kolkata was celebrated by the local moneybag, Raja Nabakrishna Deb of Sovabazar, in 1757 to commemorate the East India Company’s victory over Nawab Siraj-ud-Daulah at Plassey. The Raja, whose household puja continues to be one of the oldest living traditions of Kolkata, was Lord Robert Clive’s banian and the talukdar of the city’s north.

In 1757, according to the popular story later contested by his descendants, Lord Clive was the guest of honour at this puja and he offered Rs 101, baskets of fruits and a goat for sacrifice. At the celebrations food and clothes were distributed to the poor, a thousand animals were sacrificed, and there was night-long entertainment. The notables, including East India Company officials, were feasted elaborately and entertained with nautch performances; for the common folk, the programme included bawdy songs and ribald mimicry.

Till it was banned by law, senior British officials regularly attended Durga Puja celebrations organised by influential Bengalis and British soldiers participated in offering prayers and having prasad. In 1765, MD Muthukumaraswamy and Molly Kaushal point out in their scholarly tome - Folklore, Public Sphere and Civil Society - the East India Company went to the extent of offering what a contemporary observer described as a “thanksgiving Puja, no doubt as a politic act to appease its Hindu subjects, on obtaining the Diwani of Bengal” from the Mughal puppet of the Marathas, Shah Alam II.

On another occasion, the Company’s auditor-general, John Chips, organised a Durga Puja at his Birbhum office. For these officials who led a rather monotonous life in quaint district towns, such celebrations were welcome diversions — and occasions to eat, drink and make merry.

The new rulers may have withdrawn from the Durga Puja festivities with the official end of the age of the White Mughals, but their subjects, especially the new zamindars, sacrificed goats and ate as much as they drank. As the Pujas transformed from family celebrations of the rich and infamous to became a baroyaari or community celebration — the term "baroyaari" originates from the 12 (baro in Bangla) Brahmin families of Guptipara (Hooghly) who got together to organise the first community Durga Puja — the bhog served to the goddess became more frugal and the consumption of alcohol was an absolute no-no. It's always a lavish spread.

Most Bengali families of this time, unless they’d been influenced by the ways of the East India Company officials, stayed away from mutton and chicken. When men started eating mutton, they were served by domestics in the cookhouse, which in traditional homes used to be slightly away from the main house, and, as in the case of my maternal grandfather’s generation, they had to take a bath after partaking of such unmentionables! The elite reserved such pleasures for their baagaan baari (garden houses), where greed and lust lived in happy harmony.

When we were small and gullible, my mother used to insist that it was because the Divine Mother would add dollops of her special masalas to the vegetables. I used to make a lot of fuss about eating labra and would wonder what we would get to eat had the asuras defeated Maa Durga. “Perish the thought,” my mother would declaim. “Good always overcomes evil! Have your labra and you’ll get an extra rosogolla.” Those were the pre-PS4 days of simple bribes. As I look back, and look forward, I too believe that Maa Durga brings with her a special consignment of divine masalas. Otherwise, how could something as uninspiring as labra leave an indelible mark on my edible memory?

I don’t know whether the more contemporary additions of tomato chutney with raisins and chaaler payesh (rice pudding) had a place in the mix, but I know for a fact that if a community puja was organised by non-Brahmins, loochis (the elastic pooris made with maida) replaced bhoger khichudi because the uppermost caste ate only that rice that was served by its peers and not by those lower in the pecking order.

The bhog spread has continued in its pristine form from the time Raja Harinath of Cossimbazar brought the baroyaari format of the Durga Puja to Kolkata in 1832 and the Sanatan Dharmotsohini Sabha transformed the institution into the truly sorbojonin (or community) puja in Bhowanipore, one of the old neighbourhoods of the metropolis, in 1910. With the second such puja becoming institutionalised in Baghbazar in north Kolkata in 1918, the democratisation of the annual ritual became irreversible.

Slowly but irrevocably, according to social scientist Anjan Ghosh’s article "Durga Puja: A Consuming Passion" in Seminar magazine, these pujas also fostered the nationalist spirit, as was the case of the one supported by the Simla Byayam Samiti. This Durga Puja, in the historic neighbourhood of Simla, was banned from 1933-35 for the nationalist undertones of its celebrations. After Independence, the sorbojonin puja was transformed into the parar puja (the neighbourhood puja). It has seen the entry of political patrons, even those with left leanings active behind the scenes and it has survive the rumble of Maoism. Karl Marx may have rubbished religion as the opiate of the masses, but his flag-bearers, and those of Mao, have wisely stayed away from what truly is Bengal’s consuming passion. 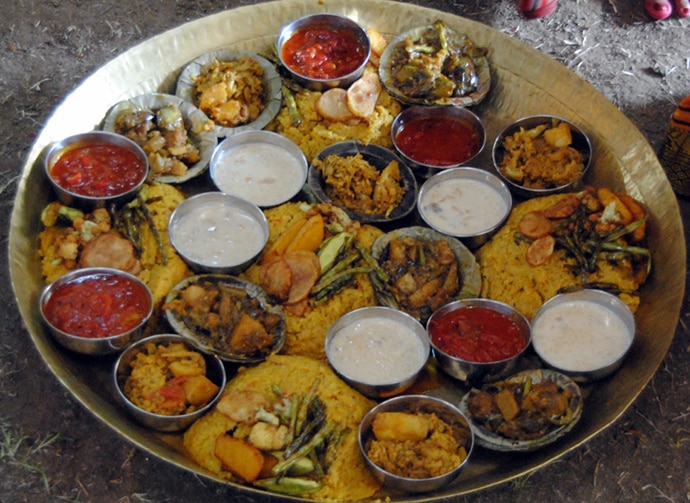 In all these years, the food ritual inside the puja pandal has remained untouched, whichever part of the world the puja have travelled, although the sub-culture of eclectic eating outside the pandal precincts has thrived in more recent decades.

Today, it is impossible to enter a major Durga Puja celebration anywhere without your digestive juices being churned by the tantalising aromas of Mughlai Paranthas, a delicacy (mutton mince and egg yolks stuffed in a parantha) invented in the kitchens of the Nawab of Murshidabad that attained perfection at Anadi’s Cabin on SN Banerjee Road in Kolkata; Fish Fry, or marinated slivers of fish breadcrumbed and deep fried, and the batter-fried Fish Orly; Kosha Mangsho, the addictive mutton preparation, which is a must-have on Vijaya Dashami day, that has made Shyambazar’s Golbari a pilgrimage spot for gourmets in the eastern metropolis; Keema Chop (spicy mutton mince stuffed in a shell of mashed potatoes and then deep-fried); and the sole concession  to vegetarians, Radha Bollobhi (deep-fried flat bread lined with a urad dal filling) served with the delicious Aloor Dum made with baby potatoes. Hangla is the word Bengalis use to describe all those who live to eat. Well, if Durga Puja doesn’t turn you into hangla, nothing in this world can, not even dimer devil.

#Bengali Cuisine, #Durga Pujo
The views and opinions expressed in this article are those of the authors and do not necessarily reflect the official policy or position of DailyO.in or the India Today Group. The writers are solely responsible for any claims arising out of the contents of this article.