How to set a farm on fire

In recent years, cities have blamed their winter smog on stubble burning after wheat harvest. Strangely straw and stubble left behind by the combine have been burnt for ages. Nobody ever says that the vehicle population has grown ten times and maybe the real reason why the quality of pollution has reached breathtaking levels. No farmer ever complains how smoke produced in cities quietly kills villages all year round. Factories have been relocated from Delhi, for instance, to far off suburbs which happen to be villages. When chemical plants set up in remote parts spew noxious fumes that cause the black tip in mangoes and the destruction of entire guava orchards, nobody ever gets dysentery. The rivers are dark and filthy not because farmers spat or shat in them but since plants belonging to rich city folks see them as methods of effluent treatment. What should make most villages angry is not just the acquisition of their lands for national development, but the fact that any hydroelectric project drowns villages, relocates villages and destroys the emotional and social structure of hundreds of villages while all the noise-sensitive city folks make is of switching on something. I think urban India must just shut up and not rattle little people because if they decide to come over for breakfast in millions, smart people will feel very uncomfortable. 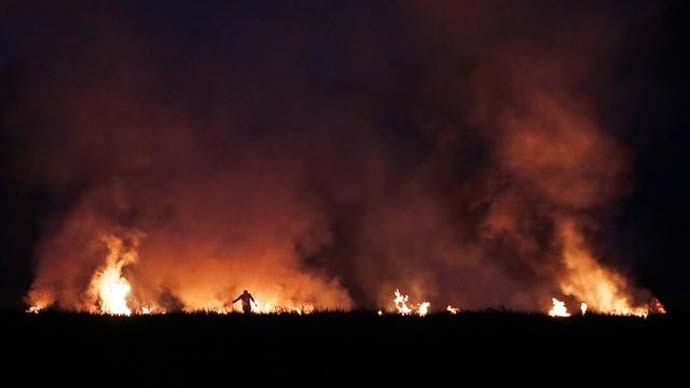 Nanu had lit the inferno in the direction of a stiff wind because, to his mind, this would get the job done faster. (Representative photo: Reuters)

The reasons for straw burning are pretty simple and logical. Firstly, wheat or paddy straw will be produced if farms have to mechanise. It is very difficult ploughing the fields in preparation for the next crop if straw and stubble litter the soil. Secondly, especially after paddy, fields have to be ready for wheat sowing within few days. Thirdly, this seems like a good method for exterminating weeds and pests of crops. Finally, it is nobody’s business what a farmer does on his plot if factories continue to invade rural India and construction projects randomly acquire farmland. I mean, how can anyone come to a farm and tell residents to vacate? It’s almost like saying to city people: give us your children we wish to adopt. How is the nation more important than a single suicidal farmer?

Stubble burning is never simple. You have to be extremely responsible. When a combine-harvester leaves your farm it leaves in its wake a sigh of happiness. You are relieved that four months of toil in the worst weather is finally safely in the bags. You want to go home and crash for a lifetime once the godowns are locked up. In the case of wheat, you do have a couple of months to the next crop and you are more relaxed, though you do have to manage the golden yellow sheet of straw that is left behind. The main cause for immediacy are two: one the straw is highly inflammable and a careless spark can turn into an inferno, racing with the wind at sixty miles an hour, that could jump the fence and eat up the neighbour’s still-standing crop. And two, you must immediately plough the fields and expose their entrails to the sun, which improves the character of the soil.

Also, in the case of wheat, you have to be extra vigilant. It is three times more playful with fire since it is much drier than paddy straw. Just imagine matchsticks planted real close for several acres; that is wheat in April, a super-dry month. The first trick you must keep in mind is to set fire to the field against the wind to slow it down. Then, you must have not one but ten men with green leafy branches for managing the fire. You also run water into the irrigation channels to control the advance of the flames, like a moat in a castle. A border of ten feet or so must be ploughed around the entire farm to save the neighbour’s crop. And most importantly, the captain of the ship, you, has to be present during the operation. 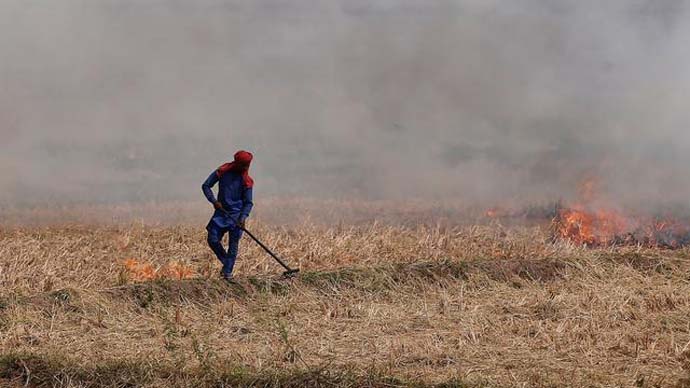 Stubble burning is never simple. You have to be extremely responsible. (Photo: Reuters)

In 1990, I made a mistake. I asked Nanu, our opium-imbibing buffalo-keeper to do the needful to the stubble. With the cool nonchalance of Clint Eastwood, the cowboy tucked up his chequered lungi and went off like the lone ranger he was. In his fogged-up head, he did not think it important to inform the other men. It was ten minutes after he was gone that an explosion went off in my head: how could I have given Nanu — of all the people — an instruction meant for Einstein! I ran yelling for all to race to the field as fast as possible. Fourteen half-clad able-bodied soldiers dashed out of their huts after Nanu. It was too late. By the time we crossed the mango orchard we could hear the fierce crackling of burning straw. Thick grey smoke arose. We saw Nanu walking across the width of the fifty acres with a flaming torch following him like a trail and creating a line of destruction. He had lit the inferno in the direction of a stiff wind because, to his mind, this would get the job done faster. After all, don’t ships employ this logic? Are sailor fools?

There were forty acres between Nanu’s determination and the next farm. We barked to the old fool to stop his good work and follow us. He was perhaps in an opiate haze and didn’t care. Asghar snatched the torch from him and pinned him to the ground. A short struggle ensued, but Ashar was a tough sixty-feet-six-inch monster. The rest of us rushed through the advancing spitting flames and kept running. Little animals — the hares and the birds — that had smelled the smoke ran ahead of us reminding me of the story of panic. Drenched in sweat and out of breath we reached the other end of the farm and spread out. We lit another line of fire against the wind. Like the ringmaster in a circus, we ran about coaxing and whipping the flames making the most destructive force obey us. Thus, we created a counter fire and waited as it crept slowly towards Nanu’s wildfire. One hour later the two forces met and consumed each other. We flopped down coughing and laughing at the same time, as strange wind patterns swept the ashes and sooty dust-devils began dancing. What was a golden field, had turned black. A singed jackal sniffed about far away in search of roasted rabbits and toasted egrets.

Stubble burning is not as easy as it sounds. On the scale of ignorance, I would rate city people at the same level as our dear friend Nanu, the Clint Eastwood of the northwest.

Also Read: The farmhand who could have made news