Why sometimes the village doctor must be the witch doctor

I have heard stories of qualified doctors being posted to what are called "interiors". I wonder why villages in far-flung regions are called interiors when they are really on the fringes of so-called civilisation. Perhaps it means the middle of nowhere. The doctors I mentioned are not specialist in animals, but of humans living in some sort of wilderness of the mind. The hospitals they are kings of are yellow concrete structures with ten rooms including everything from the doctor’s chamber to the x-ray room to the wards. A set of technicians and attendants are attached to each health centre but you rarely see them except in the market or cutting grass for their cattle. They have official quarters on the one-fourth-acre campus and you can tell these are not homes of ordinary villagers by the government slogans painted on their walls. The village people don’t trust them enough and prefer paying doctors in town. This is maybe because like wine and good tea, you are only satisfied when they cost more. The village doctor works for free. 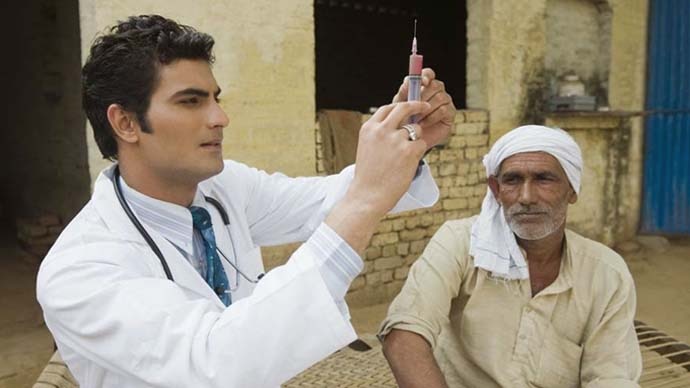 I've for a month lived in one of the rooms of a Primary Health Centre in North Sikkim where my brother was the doctor. This was a new hospital overlooking a gorge with a tributary of the Teesta River that you could hear and not see. Quite often a lovely double-rainbow would regale us. Apart from us, two nurses lived in the same building with their useless husbands who were out most days hunting birds with catapults and little success. Patients thronged the hospital from twenty villages scattered in the cardamom hills. They came with eggs, beans, poultry, hand-knitted scarves and even bottles of rice beer to show gratitude for they had no money. They were simple folks with ready smiles. The nurses were more of translators than anything else. And the doctor’s job went beyond examining patients. My brother had to see the hygiene of the village too. Once he went to inspect the water tank, fed by mountain streams, and found a bunch of snakes lounging in it. He went to deliver a baby one night with two escorts holding up torches. Now, these weren’t torches that ran on batteries but medieval bamboo ones with flames. The doctor was royalty just like the head of the village who was far better off than the second-best. My brother was respected.

In our village, the doctor was just another poorly paid government servant, totally uninspired and uninterested in the health of people and his own. Who were these guys? Were they trained, qualified doctors? Was this a punishment posting for medical crimes they had committed? No matter how innocent they were on arrival in the village, very soon rumours would arise of them drinking with dubious men. Some of them practised on the side but most indulged in drunken behaviour at sun-down. It is not rare to find bottles of methylated spirit disappearing faster than usual. I met our village doctor under slightly challenging circumstances.

We had been spraying in paddy a new foul-smelling chemical for a brown spotting never seen before. Four men with knapsack sprayers strapped to their backs walked slowly pumping away in a line to the far end of the plot and back. I was there to refill the tanks from the half-drum. The odour of the fungicide was so obnoxious and sharp that my head reeled, though I mentioned nothing. The July sun was blazing upon us and the standing water in the paddy was close to boiling. The smell and the sun was some cocktail. Asghar, Nissar, Triveni and Chandrika- average age fifty-two - went about their business only too silently. I could sense their discomfort and also their wanting to get over with the job. It was when the plot was done that Nissar threw up. That did it. Now everyone was complaining of nausea and headache. I called for Billa and dumped them in a trolley and rushed to the village hospital that I was seeing for the first time.

Before the doctor made an appearance a curious crowd had gathered. They were already wondering, with relish, if someone had died. You know how disasters make for great entertainment. I saw a paan-chewing gentleman with hurriedly combed hair stroll into the ward where my four soldiers occupied two beds. He looked under their eyelids and stared at their tongues and hooked them to a dextrose drip, except Triveni. The man said he was a doctor and the men would be up and about in an hour. I didn’t have the guts to tell him, in front of the throng, I was dizzy too.

Suddenly Triveni began wailing on the hard bench he had been transferred to. He made such agonising noises that I wore a couple of dry rivers for a frown. He breathed heavily and opened his eyes extra-wide as dead bodies do in movies. He even started shaking in a disturbing way. I looked at the doctor and he raised a palm meaning 'don't worry.' I could see faces in the windows pretending to be worried. The women made more noise. A couple of men full of self-importance stood in the doorway and looked mighty serious. Just passing by probably, just casually poking their glistening noses in. I held Triveni’s hand.

The doctor had him dropped on a separate bed that had been wheeled in from the store. A dextrose drip was hitched to his arm too. Meanwhile, the other three were sitting up and drinking from a chilled bottle of fake Coca Cola. They didn’t even glance in the direction of their thrashing compatriot. To my shock more than surprise, in two minutes the shivering stopped and brave Triveni opened his eyes.

“There is a new energy coursing through my body, Bhai Saab,” he smiled through his Hemingway-style beard.

The doctor grinned in one corner. There was nothing wrong with the man, he told me later, he just felt left out in the party. All he wanted was a hit of dextrose. It’s a whole different talent, I exhaled, being a doctor in the interiors of ignorance.

Also Read | Silence of the jackals: How the darkness quelled the blackness in my loneliness