Abused, intimidated, attacked: A day in the life of female toll booth operators

Standing there for 10 hours daily, in searing heat, facing abusive customers who even slap them and pull their hair, female toll booth operators truly see the world pass by.

At the gateway of major roads, toll booth operators face brutal intimidation, on a routine basis. They are dragged into disputes and ego-driven fights, yelled at, abused, even hit just because commuters don’t want to pay the due toll.

One such toll plaza, the Kherki-Daula toll in Gurgaon, is managed mostly by female booth operators — who face similar abuses, slaps, blows, even their hair and clothes being pulled.

On Tuesday afternoon, Somi Kumar, booth operator from Banaras, asked a female commuter to pay Rs 65 as the toll amount. The lady commuter first started abusing her and then came out of her car and pulled at Somi's kurta, slapped and punched her.

“It’s almost every day — we come across people who think that we are asking for money for ourselves. Commuters treat us as if we are not humans, they will ask us questions like: ‘Pay karke kya hoga, madam’ (what will happen if we pay)? or they threaten us with ‘Khol, varna pitegi’ (open the barrier, otherwise you’ll be beaten),” said Somi. Around 100 girls — all between 18-22 years of age — have been employed by a toll operator company. As most of them come from Banaras, Jharkhand and Bihar, the toll operator has rented a building near the toll plaza where all of them stay. Each operator is paid Rs 10,000 per month and they work in two shifts, where girls handle the booths during the day and male booth operators take over in the evening.

But gender is no barrier to the kinds of abuse and attacks the toll booth operators face. Incidents of clashes at the toll booths are both high and worrying. In 2017, 200 disruptions were reported. 2018 saw 160 and this year, just in the last six months, 52 such incidents have been recorded.

Sushma, 22-years-old, says the friction often occurs as most of the girls hail from Bihar and Jharkhand and in her view, language causes problems.

“We know Hindi — but our accent is apparently such that when we ask for the toll money, commuters say 'Kya keh rahi hai’ (what are you saying?). There are some who halt near the booth and say, ‘selfie de’ (give us a selfie),” she says. 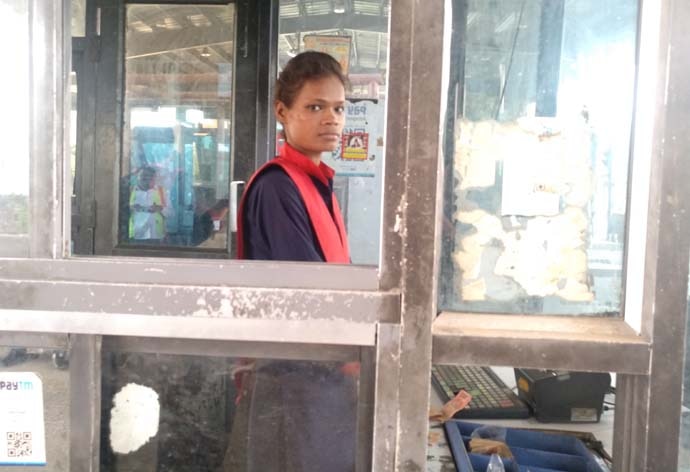 Being abused has become part and parcel of toll operators' working life — each one of them also goes through intense physical pressure.

“When we stand in the booths, the heat is so high that sweat becomes unbearable. The booths are not air-conditioned and they tend to become boilers on certain days. We have to work with the fastest fingers possible too, noting the vehicle numbers if the RFID card is not working and giving exact change to commuters. At the end of the day, we only ask for some basic dignity, but even that doesn’t happen,” said Ibrana Bano, who has been a toll operator for the last two years.

Toll operation requires each girl to be on their toes, constantly coping with pressure.

Santosh Yadav apparently had a nervous breakdown after working in such conditions — and then, allegedly, after being abused by a commuter.

“I am the only earning member in my family. It’s not out of my will that I have taken up this job. This is not a dirty job but people who pay the toll consider it as a charity. I was hospitalised and it took me two weeks to recover from my strain. The pressure to work in the toll booths is plenty — if we let a car go without taking money, who is going to pay for it? I can’t afford losing Rs 65 every day,” said Santosh. For whom does the bell toll? Toll operators stand for long hours. They get one break in the day. (Photo: Via author)

The operators stand for not less than 9-10 hours daily.

“We come to work at 8 AM and leave by 6, but these 10 hours standing at the booth are a real challenge for us — with one break in-between. We want the authorities should provide us with women police officers at the booths, so that we can at least work without having any sense of fear. That should be the basic protection offered to workers like us. We don't ask for much else,” added Manisha.

The toll booth concessionaire says that they have indeed requested police protection for female booth operators — but till now, they haven’t received any response from the cops.