How a pair of twins are redefining German cuisine

The culinary world has its own share of ironies, but the one delicious nugget I gathered last weekend was that the visiting Suhring twins, who opened their eponymous restaurant in a charming private home in Bangkok in 2016, are on top of the local BK Magazine’s Top Tables, while Gaggan is at No. 4.

Gaggan is the World No. 5, Asia’s No. 1 and the recipient of two stars in Thailand’s debutant Michelin Guide (compared with Suhring’s World No. 54, Asia’s No. 4 and one Michelin star). But BK Magazine is the authoritative local voice, so being No. 1 on its list does matter. The irony is that Gaggan, which is at No. 4, is the brainchild of Gaggan Anand, who became friends with the twins when they used to work together at the Lebua, egged them on to launch a modern German restaurant, though they had never cooked German food, and he now owns 25 per cent of Restaurant Suhring.

When Mathias and Thomas Suhring (Mathias was born five minutes before his brother, but it is impossible to differentiate between the two) did their pop-up at Varq at The Taj Mahal Hotel, the German National Tourist Office was most delighted. German Tourism has dedicated 2018 to the theme of #EnjoyGermanCuisine, but for Romit Theophilus, there was no one in the country to help him promote this enjoyment. The only German chef he could locate in the country was Alex Moser of Andaz, but he’s better known for AnnaMaya, which is famous for its cuisine inspired by locally sourced produce, its most sought-after dish being the millets biryani (the millets being the poor man’s jhangora, or barnyard millets). Alex, moreover, is all set to be relocated to another Hyatt International property, so the Suhring twins saved the day for Theophilus.

The twins were 12 years old when the Berlin Wall came down, so they vividly remember their bleak times in Communist East Berlin. Now in their early 40s, they have spent 10 years in Bangkok; seven of them spent cooking Italian food, which is what they have been doing throughout their adult years, at Mezza Luna at the Lebua. Yet, today, they are known as the foremost exponents of their modernist re-interpretation of traditional German cuisine. The words sauerkraut and bratwurst are not even breathed in the restaurant, potato salad doesn’t exist for them, and wine sells more than beer. 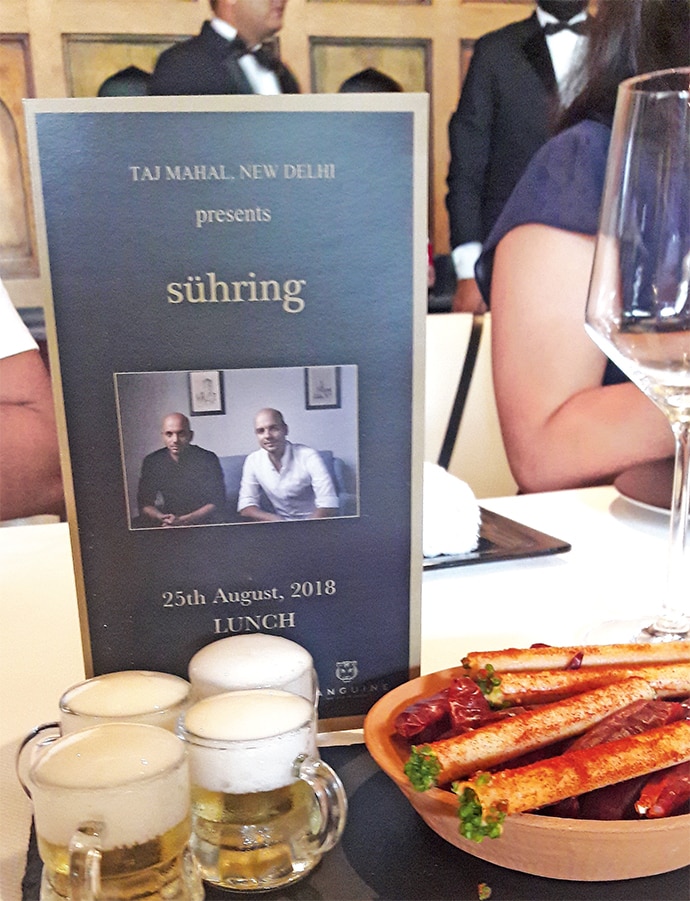 The twin chefs did a pop-up at Varq at The Taj Mahal Hotel, recently. (Photo: Mail Today)

Everyday German dishes come with a twist of cosmopolitanism. The Bavarian cheese delicacy, Obatzda spiked with sweet and hot paprika, doesn’t come as an accompaniment to pretzels and lager (in typical beer garden style), but as a stuffing in cigarette-shaped rolls served with the local shandy named Radler. The Berliner Pfannkuchen, the traditional German buns made with sweet yeast dough, arrive with a truffle cream filling and a generous shaving of a Tasmanian black truffle. The same truffle shows up in the delectable handcut spaetzle (egg dough noodles).

But the rest of the menu is pure invention.

The melt-in-the-mouth Storhappen is a ribbon of Chiang Mai sturgeon made into a square, filled with buttermilk, placed on bread square, and topped up with caviar from the same fish. The chicken salad half-sphere bursts into your mouth to release a butterhead lettuce broth. And the lamb showstopper is a rack cured and roasted in the way they do it in Lozere, Central France, applewood smoked, and served with an eggplant sauce and a piece of Japanese white eggplant on the side. This is certainly not a German restaurant where you can ask for bratwurst generously lubricated with currywurst.

This is German haute cuisine at its refined best.